I don’t have much in common with Meghan, Duchess of Sussex. But when it comes to making the gut-wrenching decision to split with your family it appears we have walked the same path — albeit on a far different scale. 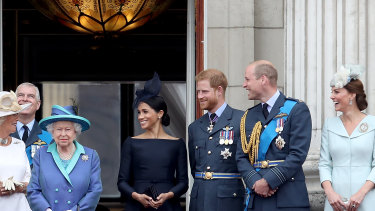 Splitting from your family is a painful last resort.Credit:Getty

The role I was cast was the “difficult woman”, accused of manipulating even when I was, in earnest, bending over backwards to comply.

Many women have trod the same path. And that’s one reason why for so many women, despite the yawning chasm of class and privilege that exists between them, the reaction to Meghan is so familiar.

Meghan was cast into this role of “difficult woman” from the very beginning. No matter what she did she was reported as bossing someone around, upsetting sweet Kate who played her role, breaking up brothers, insulting her grandmother-in-law and threatening centuries-old traditions.

When no evidence was available to support the “difficult woman” narrative, people just simply made it up.

Take, for example, the £2.4 million ($4.5 million) renovations of Frogmore Cottage. The narrative was taxpayers handed over their hard-earned cash for the extravagant renovations that “difficult” Meghan demanded, practically taking food off their tables to pay for her yoga studio.

But, as independent UK fact-checking website, Full Fact clarifies “Taxpayers (and equivalently the government) are not directly worse off financially because these renovations are happening, and would be no better off this year if no renovations had been made.”

Anyone who thinks making the conscious decision to distance yourself from your extended family is easy has clearly never been put in the position of having to do it. Leaving your family is a last resort, when the alternative of staying becomes unbearable, and although the pain lessens with time, it doesn’t ever stop.

Being granted permission to split by the Queen on Monday will help with the logistics but it’s unlikely to lessen the heartache.

Every time a family occasion rolls around and you’re not there you feel like you have to justify your decision to split. All of which leads you to relive all the reasons you left in the first place, and feel the hurt, anger and rejection all over again.

I suspect Harry and Meghan will feel this every time the Windsor family is wheeled out for official duties. Even though all the reasons they split from the family are still true and valid, they will think of what they have lost.

What can help to lessen the pain is to know the difference between “what could have been” and what you wished it would be. When I find myself yearning for family, it’s actually not my family that I yearn for. It’s a fictional one where I would be loved, valued and accepted in a way that my actual family would be incapable of doing.

Despite the heartbreak of splitting from my family, I don’t regret my decision. I know that the last eight years have been less stressful and more joyful than they would have been had I stayed.

For all those who are quick to judge Meghan and Harry, take it from me. Splitting from your family is not an indulgence or a business opportunity. It’s the least worst option.

Kasey Edwards is the author of the young adult series The Chess Raven Chronicles under the pen name Violet Grace.

Related posts:
01/14/2020 Lifestyle Comments Off on The pain of splitting from your family never goes away
Recent Posts
We and our partners use cookies on this site to improve our service, perform analytics, personalize advertising, measure advertising performance, and remember website preferences.Ok