The Polish champion who survived Auschwitz thanks to his fists: Film tells true story of boxer who was made to fight for Nazi amusement, killed and ate an SS officer’s dog and saved a Saint from a beating

A film inspired by the real-life story of a Polish boxer who was forced to fight for Nazi entertainment while imprisoned in concentration camps is set to hit UK cinemas, it has been announced.

One of the first prisoners taken to Auschwitz was 23-year-old fighter Tadeusz ‘Teddy’ Pietrzykowski, who arrived on 14 June 1940 and received prisoner number 77.

Before the war, Teddy was the bantamweight vice-champion of Poland and a champion in his hometown of Warsaw, having trained with Feliks ‘Papa’ Stamm – a prominent coach widely regarded as the father of Polish boxing.

But after Germany invaded Poland in 1939, he tried to get to France, where he hoped to serve as a pilot in the Polish army.

However, he was caught at the border between Hungary and Yugoslavia and sent to Auschwitz, where he was forced to fight for his survival and entertain Nazi guards after they discovered his boxing talent.

His moving story – which included an assassination attempt on an SS officer before killing and eating his vicious dog, as well as saving a Saint from a beating – was made into a Polish film The Champion of Auschwitz, which will be heading to UK cinemas from September 3. 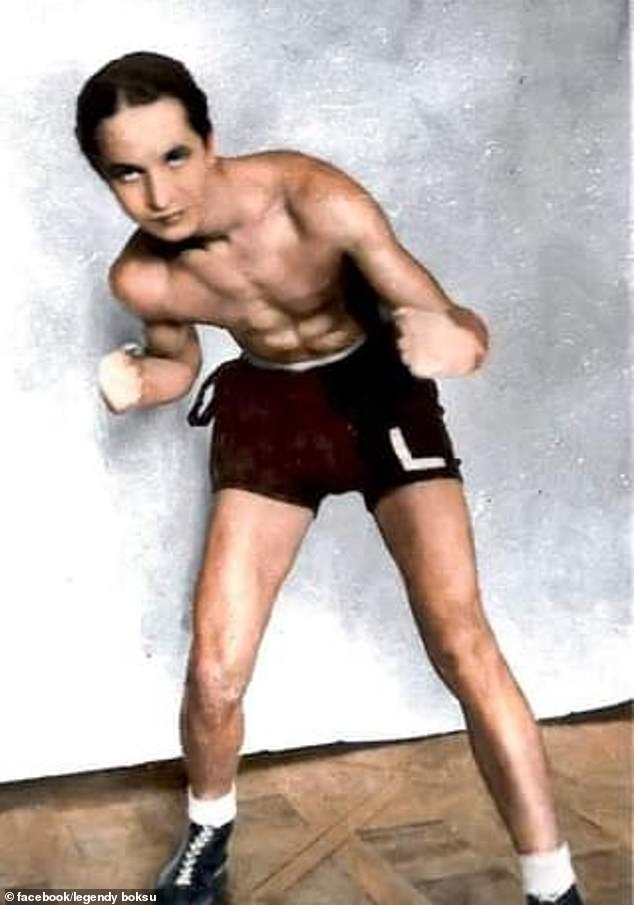 One of the first prisoners taken to Auschwitz was 23-year-old fighter Tadeusz ‘Teddy’ Pietrzykowski (pictured), who arrived on 14 June 1940 and received prisoner number 77

Teddy had more than 40 victorious fights against other inmates and German kapos – prisoners chosen by the SS to keep order and enforce discipline – and is thought to have lost only once or twice despite going up against opponents of various weights.

The boxer, who in a secret message to his mother called himself the ‘all-weight champion of Auschwitz’, would share the food scraps he won with fellow prisoners and also became involved in the underground resistance movement.

‘In order to survive the camp, he had to prove himself in some way,’ said the fighter’s daughter, Eleonora Szafran, according to War History Online. ‘The only thing he could do was box.’

Born in Warsaw in 1917 and brought up in a traditional Polish family in which patriotism and Catholic values played a great role, Teddy was drawn to boxing at an early age.

In 1938, a popular Polish sports magazine described the vice-champion of Poland as ‘the best bantamweight boxer in Warsaw’.

But at the outbreak of the Second World War, he joined his hometown’s light artillery regiment before trying to flee after Poland was invaded. 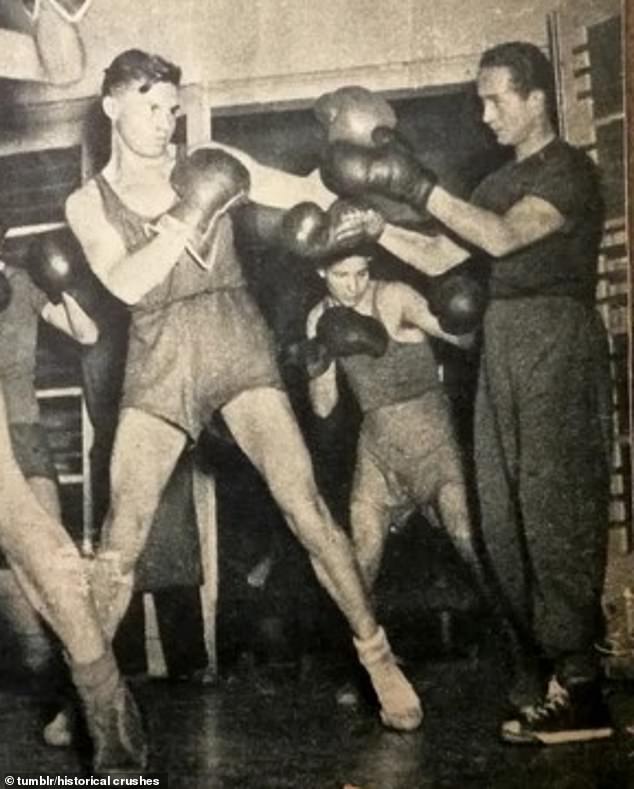 Before the war, Teddy (pictured right) was the bantamweight vice-champion of Poland and a champion in his hometown of Warsaw, having trained with Feliks ‘Papa’ Stamm – a prominent coach widely regarded as the father of Polish boxing 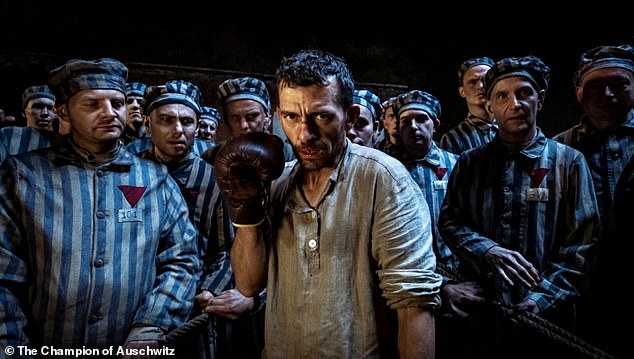 But after Germany invaded Poland in 1939, he tried to get to France, where he hoped to serve as a pilot in the Polish army. He was caught at the border between Hungary and Yugoslavia and sent to Auschwitz, where he was forced to fight for his survival. Pictured, a scene from The Champion of Auschwitz which depicts his story

He was arrested by the Nazis on the Hungarian-Yugoslav border and imprisoned in Tarnów before eventually being transferred to Auschwitz.

It is thought he was interrogated and tortured by the Gestapo (Nazi Germany’s political police force) before being moved to the concentration camp.

While at Auschwitz, guards forced him to fight, with his first opponent being Walter Dünning – who before the war was a middleweight vice-champion of Germany – in March 1941.

Dünning was 70kg while Teddy was around 40kg. Dünning is said to have stopped the fight when he realised he was losing, and his opponent received a loaf of bread and a bar of margarine for winning, which he shared with other inmates.

‘[Teddy] was the smaller of the two, but he was agile and fast. He had an incredible punch, aimed right for the stomach, and knew how to duck his opponent’s blows.

‘He won the fight and got his bread and margarine,’ recalled Auschwitz survivor Tadeusz Sobolewicz decades later, reported The First News. 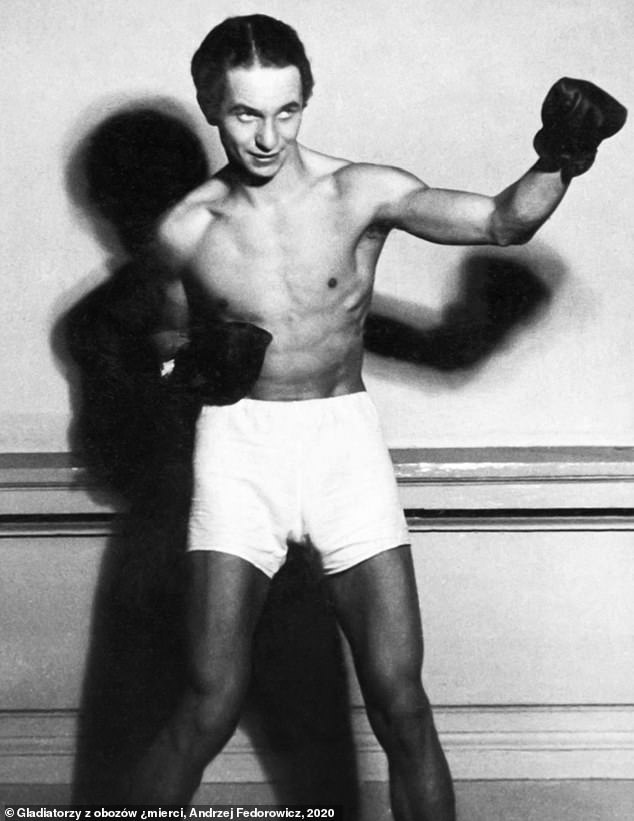 While the boxing matches were intended to be amusement just for camp personnel, the fights became popular with prisoners as well, boosting morale whenever Teddy triumphed over German opponents or collaborators.

Teddy reportedly tried to adjust his style to his opponents, avoiding injuring them when they were other Polish inmates and prolonging the fights for the entertainment of viewers.

The boxer also met Father Maximilian Kolbe, who was later venerated as a saint for volunteering to die in the place of a strager in the camp. He noticed a guard bullying the priest and told the SS officer to pick on him instead.

In the next moment, the guard was knocked out on the ground from one hit, some reports of the incident suggest, while adding that the beaten Father then asked Teddy to leave the man in peace.

The fighter met the priest once more, sharing a piece of bread with him. But the next day, when learning that someone had stolen it, Teddy became enraged and seized the thief. 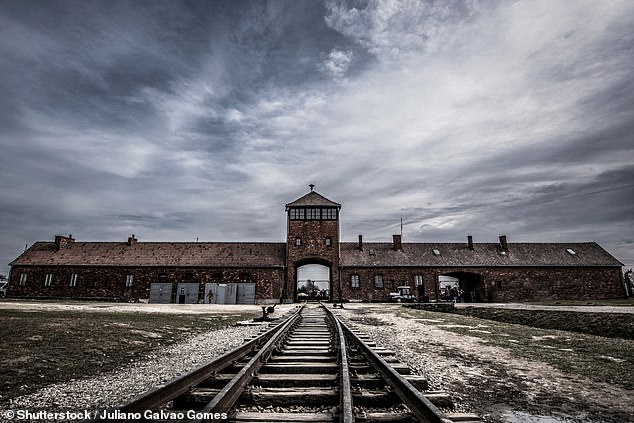 While at Auschwitz (pictured), guards forced Teddy to fight, with his first opponent being Walter Dünning – who before the war was a middleweight vice-champion of Germany – in March 1941

However, Father Maximilian Kolbe insisted that the thief not be hurt, with Teddy later recalling: ‘As I had a piece of bread in a pocket, I gave it to Kolbe and he, before my very eyes, gave it to the thief saying, “He is also hungry”.’

The boxer also collaborated with Polish cavalry captain and resistance leader Witold Pilecki, who entered the camp voluntarily under a false name to gain proof of Nazi crimes and organise the resistance movement.

As part of the resistance, Teddy took part in a failed assassination attempt against a high-ranking German SS officer in the camp, Rudolf Höss.

WHAT WAS THE AUSCHWITZ CONCENTRATION CAMP?

Auschwitz was a concentration and extermination camp used by the Nazis during World War Two.

The camp, which was located in Nazi-occupied Poland, was made up of three main sites.

Birkenau became a major part of the Nazis’ ‘Final Solution’, where they sought to rid Europe of Jews.

An estimated 1.3 million people were sent to Auschwitz-Birkenau, of whom at least 1.1 million died – around 90 percent of which were Jews.

Since 1947, it has operated as Auschwitz-Birkenau State Museum, which in 1979 was named a World Heritage Site by Unesco.

He helped sabotage the saddle of Höss’ horse, however it only resulted in the officer breaking his leg and the incident was labelled an accident by the Nazis, so none of the prisoners faced any consequences.

Later, the boxer killed Höss’ dog, which had been trained to attack Jews and killed at least one of the inmates. The pet was cooked, hidden and eaten by the prisoners, with the officer having never found out what happened to his dog.

Teddy was also involved in passing information and sabotaging labour activities for the resistance.

In 1942, in a secret message to his mother, the boxer wrote: ‘Today I am the all-weight champion of Auschwitz. Remember how everyone said – what will become of it? He will not be able to cope in life…. I’ll be fine in hell.’

After a while, Teddy impressed with his fights so much that at one point, it was even suggested that he sign a volksliste (a declaration of being of German origin) so he could leave the camp, however he refused.

But eventually, German officers didn’t like the fact that the boxer was winning all the fights, and there were rumours that he would be executed in revenge.

However, in March 1943, a visiting German official recognised Teddy following a 1938 match and had him transferred to the Neuengamme concentration camp in northern Germany, to fight.

Later he would be sent to the Bergen-Belsen camp, where he was eventually liberated by British soldiers in 1945.

Following the war, the boxer became a sports coach under Major General Maczek of the Polish 1st Armoured Division and then a P.E. teacher in Bielsko-Biała in Poland.

He didn’t continue boxing professionally, instead focusing on helping the next generation of Polish youth up until his death on 18 April 1991.

Lead actor Piotr Głowacki, who plays the boxer, added; ‘Tadeusz “Teddy” was a man who, thanks to a strong will to survive and a passion for boxing, has shown that even the greatest, unimaginable evil can be defeated.’