Peter Batey, the founder of one of Australia's most recognised arts prizes, has died.

Mr Batey created the Bald Archy Prize in 1994 as a spoof of the prestigious Archibald Prize, and it has since become an icon on the Australian art calendar for its satirical images of well-known Australians. 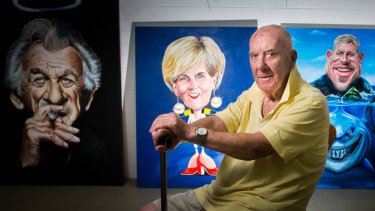 Peter Batey has died after his car went off the road in regional NSW. Credit:Elesa Kurtz

NSW Police confirmed a man in his 80s died when his car left Muttama Road at Coolac near Gundagai and struck a tree about 2.30pm on Friday.

"Driving home from Cootamundra yesterday his car left the road. He may have had a heart attack," the statement said.

Mr Batey has been described as a major influence on the development of art and comedy in Australia over the past 50 years through his work as an arts administrator, playwright and festival director. 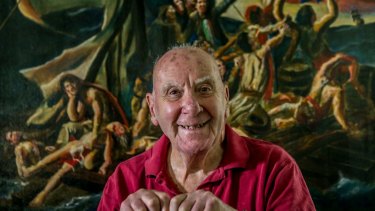 In 1999 he was awarded an Order of Australia for his services to the arts and the community.

The Bald Archy Prize is described on its official site as an avenue to provide artists of all styles an opportunity to create portrait paintings rich in humour, dark satire and caricature.

The 2019 edition was won by Melbourne artist Simon Schneider, who created a portrait of Geoffrey Rush.

Mr Batey, speaking on the official Bald Archy Prize site, said his rationale for creating the awards was to poke fun at the seriousness of some art competitions.

"The nation is awash with art competitions and prizes," he said. "So much so that it's got to the stage where if you haven't won one, even at the local country show, you are regarded as being at the bottom of the heap."

The arts administrator was born at in Benalla in northeastern Victoria in 1933.