Jane Gilmore is no shrinking violet. She set out in her latest book to fix a problem that wasn’t only a matter of language and ignorance, but life and death for women. Gilmore, a freelance journalist, proud feminist and frequent contributor to The Sydney Morning Herald and The Age, has written extensively on male violence and objectification of women. 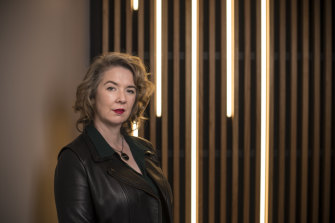 Jane Gilmore was prompted to take action when she read an unconscionable headline that seemed to blame a murder victim for her own death.Credit:Wolter Peeters

Her book, Fixed It, argues that the media is guilty in perpetuating the misrepresentation of victims as blameable for their own suffering or death. Even if the stories themselves lay out the facts of male violence and approach the situation conscientiously, the headlines are designed to bait readers.

After reading a particularly unconscionable headline that implied a victim’s selfie led to her violent murder, Gilmore used a basic photo-editing tool to cross out the headline and rewrite it. She shared it via social media and thought nothing more of it until hours later.

‘‘The response was just so strong and that was a moment when I thought ‘a picture paints a thousand words’,’’ Gilmore recalls. ‘‘I often give an explainer in posts that court reporting is difficult and also that journalists don’t choose their headlines most of the time. Eighty per cent of the headlines we see we don’t click on, but we do see them and they have an effect on us.’’

Gilmore has spent a lot of time in courts observing and sometimes reporting on family violence cases. She is not unsympathetic to the highly competitive nature of the media and the pressure to craft and share headlines that draw readers and provoke emotional responses. But as a freelancer, has the risk of upsetting editors or putting major media organisations off-side made her hesitate? 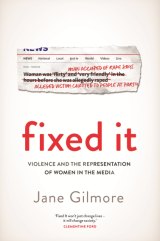 ‘‘I have done headline fixes of organisations that I freelance for,’’ Gilmore says. "I’ve never deliberately excluded publications that I work for. I have posted a few with my heart in my mouth.

"To give them credit, I’ve never had blowback and I’ve written for The Age for many years. The ABC has regularly appeared over the years and I find that really disappointing.

‘‘I always emphasise that there isn’t one single publication that I haven’t had to do a Fix It on. It’s indicative of an underlying problem within the media in general.”

Gilmore believes the prevalence of men’s violence against women is directly the result of not talking about it and accepting it through silence.

‘‘One woman a week is murdered, but there’s a phone call made to police every two minutes in Australia regarding family violence and that’s only the cases that are reported, not the many that aren’t," she said. "There’s sexual violence, financial abuse, hundreds of thousands of children growing up in violent situations that never get a voice in media so we never get to hear those stories.”

Gilmore cites the Media Entertainment and Arts Alliance’s 2016 Women in Media report into bullying in the workplace that said attitudes towards women began at the individual level and within those organisations that are charged with informing the public.

‘‘One of the things that’s important to know is that the rates of bullying and harassment is higher in the media than in the police,’’ says Gilmore.

‘‘The report showed 48 per cent of female journalists had experienced bullying, harassment and intimidation in the workplace. The problem with both is that they’re male dominated, quite conservative industries that celebrate the stoic, strong cliche of a male leader.

‘‘There’s a lot of similarities between hard news journalism and policing, so that cycle of skewed court reporting and crime reporting gets fed into the public, reinforcing the myths that the victims are to blame.

"Then the public are the same who sit in juries, or become lawyers or journalists. It’s a never-ending loop.”

Gilmore believes the most important audience for Fixed It is the people who regularly consume news.

‘‘They’re the ones who can enforce change. Journalists are pushing from the bottom up but if consumers are pushing back and saying, ‘this is bullshit and you can’t write it like that’, then media organisations have to listen.

"The book is very much about educating readers that they have the power to enforce change.’’

Related posts:
09/21/2019 Lifestyle Comments Off on Victims not to blame: the journo who wants to fix the media
Recent Posts
We and our partners use cookies on this site to improve our service, perform analytics, personalize advertising, measure advertising performance, and remember website preferences.Ok