Former Wallabies captain David Pocock has long campaigned on the fringes of politics as a climate warrior, his activist credentials cemented in 2014 when he was arrested for chaining himself to a tractor in protest against a new coal mine in northern NSW.

But standing on the sidelines of the United Nations climate talks in Glasgow this year, he says, hammered home the importance of being inside the political tent. Pocock on Friday will formally announce his foray into politics as an independent Senate candidate for the ACT. 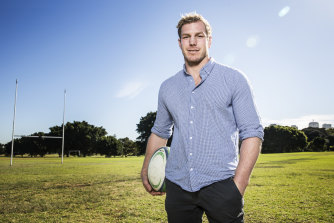 Former Wallabies star David Pocock is running as an independent candidate for the Senate in the ACT.Credit:Jessica Hromas

“I’ve always thought that I could potentially have more impact outside the political system,” Pocock says in a Zoom interview from Zimbabwe where he has spent much of the past year working on a community conservation project he co-founded with brother Steve.

“Seeing the way Australia was represented at COP26 was really frustrating and, frankly, pretty hard to stomach. That really reaffirmed and highlighted the need for better political leadership.”

The 33-year-old rugby union great, who played 83 tests for the Wallabies and captained the side in 2012, hung up his professional boots last year, resolving to dedicate his time to fighting for more ambitious action on climate change.

He says Australians are being “failed on climate”, and sees independents as key to the solution.

“We’ve got all the technology we need. We just need the political will,” he says, “But we can change that and we can change it really quickly if we have more independents in there who are actually pushing for a better future.”

Pocock has lived in Canberra since 2012 but running as an independent for the ACT, where voters have elected one Liberal and one Labor representative since 1975, involves a fair degree of aspiration.

To be successful, he will need to take a seat off either Labor’s Katy Gallagher or Liberal Zed Seselja in a field that includes constitutional law expert Kim Rubenstein, who is also running as an independent.

His environmental bona fides and high profile would make him an attractive candidate for the established parties, particularly the Greens, but he insists he does not want to be beholden to a party machine.

“The reason I’m running as an independent [is] to be able to represent my community and not have to toe a party line that’s out of step with what they want,” he says.

Whoever wins government in 2022, it is likely they will again face a Senate where crossbenchers hold the balance of power. The Opposition has committed to legislating a 43 per cent emissions reduction target by 2030 if they seize power and, in an attempt to ward off a Coalition scare campaign that this will be driven higher if they are forced to deal with Senate crossbenchers, have ruled out negotiating the target.

Pocock says Labor’s target is a “good step in the right direction” but declines to be drawn on how he would vote on the issue as a crossbencher, saying his focus is on consulting Canberrans on what they want from a senator.

“I see the role of independents to be pushing for more climate action because that’s what the community wants because that’s actually in the best interests of Australians economically. I don’t know what that will look like should I be elected to represent the ACT,” he says.

Pocock’s progressive platform extends beyond climate change, including wanting to see a restoration of the ACT’s legislative rights, and a constitutionally enshrined Indigenous voice to federal Parliament.

“The Uluru statement from the heart is just such an incredibly generous offer from First Nations Australians to actually begin the process of truth and reconciliation. I think it’s well overdue,” he says.