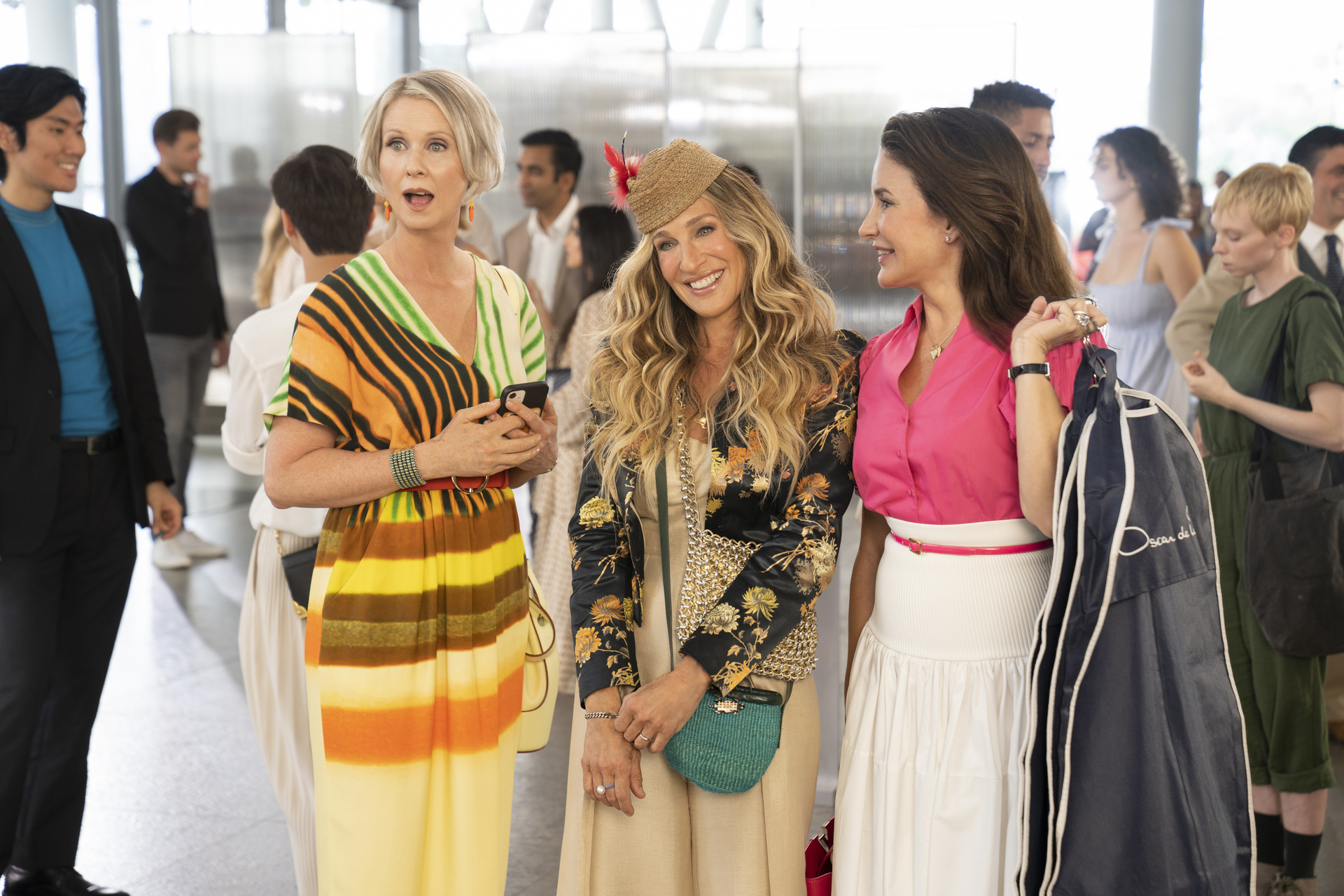 Kim Cattrall may not be part of And Just Like That, but Samantha Jones isn’t far! The first two episodes of the Sex and the City revival dropped on HBO Max on Thursday, December 9, and the women didn’t waste any time bringing up their missing friend.

‘Sex and the City’ Drama Through the Years: A Timeline

While Charlotte implies that Samantha died — “Oh, she’s no longer with us” — Miranda tries to clear things up.

Bitsy is relieved. “Oh, thank God. After the horror show we’ve been through, I assume anyone I haven’t seen in a while has passed on or moved to Palm Beach,” she quips.

After their meal, Carrie explains to the audience during a conversation with Miranda that Samantha left for the U.K. after the author fired her as her publicist.

“You know, it is kind of like she’s dead, Samantha. We never even talk about her,” Miranda admits.

“Well, what is there to say?” Carrie responds. “I told her that, you know, because of what the book business is now, it just didn’t make sense for me to keep her on as a publicist. She said, ‘Fine,’ and then fired me as a friend.”

Carrie then claims that she reached out several times, but Samantha stopped taking all calls from the girls.

“I understand that she was upset, but I thought I was more to her than an ATM,” she says, later adding, “I always thought the four of us would be friends forever.”

Cattrall, 65, played Samantha on all 94 episodes of the original series, which aired on HBO from 1998 to 2004. Although she went on to star in both of the movies, she chose not to be part of a third film and ultimately, the movie was scrapped.

“And Just Like That was never four [characters],” showrunner Michael Patrick King told The Hollywood Reporter on Wednesday, December 4, when asked about the new show. “It never was on the radar as four because Kim Cattrall, for whatever reason, didn’t want to play Samantha anymore while we were doing the [third] movie.” 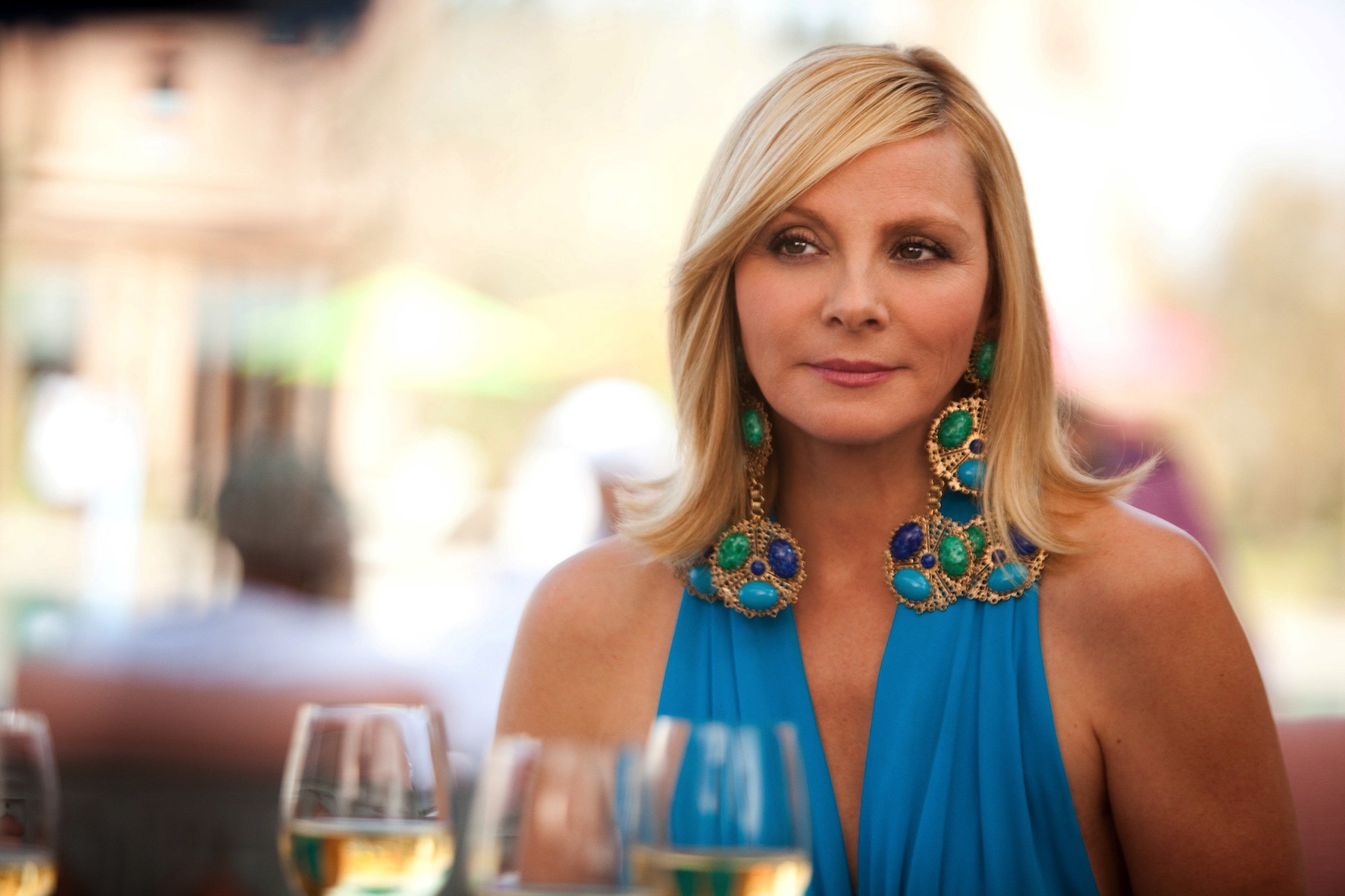 The writer, 67, continued, “I never thought, ‘Oh, there’s a hole I have to fill.’ Samantha doesn’t not exist in their lives. [And Just Like That] was born of these three characters: What’s their life, and who can I bring in to inform it?”

Over the years, Cattrall has made headlines for her feud with Parker, 56, who she publicly called “cruel” in 2018 following the death of her brother. Later that year, the Divorce alum stated that she is “not in a catfight with anybody” during an interview on the “Origins” podcast.

Parker added, “I’ve never publicly — ever — said anything unfriendly, unappreciative about Kim because that’s not how I feel about her.”

During the same interview, King explained the dynamic between the women on the flagship show. “Kristin, Cynthia and Sarah Jessica became one group, and Kim never joined mentally,” the producer shared. “Kim fought and said, ‘I’m everyone’s favorite.’ … [Parker’s] name was contractually, legally, righteously, the only name on the poster due to the fact that she was a movie star in 1998 when the series started and she did a leap to do a show about sex on [HBO], the channel that did the fights, and it doesn’t matter how popular you are. I guess for Kim it didn’t matter how much the raise became if there was never parity, but there was never going to be parity.”

Chris Noth later weighed in on the feud, telling The Guardian, “I’m very close with SJ and [Cattrall’s] descriptions of her don’t even come close.”

‘Sex and the City’ Sequel Series ‘And Just Like That’: Behind-the-Scenes Pics

Davis, 56, also commented on her absence during an interview with the Today show on Wednesday, December 7. “We love Samantha. Samantha is never not going to be a part in some way, right?” she said at the time. “There is respect for Samantha. … It’s part of the story. We would never disrespect Samantha.”

And Just Like That releases new episodes on HBO Max every Thursday.

12/09/2021 Lifestyle Comments Off on Where's Samantha? How ‘And Just Like That’ Explained Kim Cattrall’s Absence
Recent Posts