There was instant, palpable chemistry when I started talking with Hákon, an Icelandic painter who was helping me plan my first solo trip to his country. Being millennials, we had of course met on Reddit where I asked whether my sheep-herding and aurora-viewing itinerary made any sense. He came to my rescue and complimented the impulsive Doctor Who tattoo I’ve since had covered up and will never speak of again. It didn’t take long before we went from DMing on Reddit to texting all day to Skyping every evening, getting fully swept up in the out-of-this-world sexual chemistry and emotional connection between us. But there was just one hiccup: I was nine years into a relationship with Michael, the man I wanted to marry.

It’s at this kind of crossroads where many find out who they really are: some cannot resist giving in to temptation, while others run fast and far to avoid indiscretion.

For me, it was a simple matter of telling my now-husband that a handsome, 6’7” Icelandic guy had caught my attention in a serious way and that I intended to see where it went. In fact, as I would end up telling Michael, I thought the two of them would get along.

Michael and I had been non-monogamous for years before meeting Hákon (which you can read more about here), indulging in extracurricular romantic dalliances ranging from one-time hookups to longer term friends with benefits. Non-hierarchical committed relationships were in no way forbidden in our arrangement, but even polyamorous people can be picky, and nobody worthy of consideration had ever entered our lives. Then, like any other romantic relationship between consenting adults, when we knew, we knew.

Michael immediately understood that what was growing between me and Hákon transcended the casual flings of the past. Initially, he left me to enjoy Hákon by myself, but my instinct about the prospect of their friendship was spot-on, so it wasn’t long before the three of us were sharing in those evening video chats.

The long distance component made it easy to balance everyone’s needs: Iceland was eight hours ahead, and Hákon was usually asleep by the time I came home from work. I could talk to both of them all day, give my nights to Michael, and on the weekends Hákon would stay up late so we could all be together.

And that is how we entered into our throuple relationship, a V-type triad with me at the center and the two of them sharing an aromantic, asexual bond. 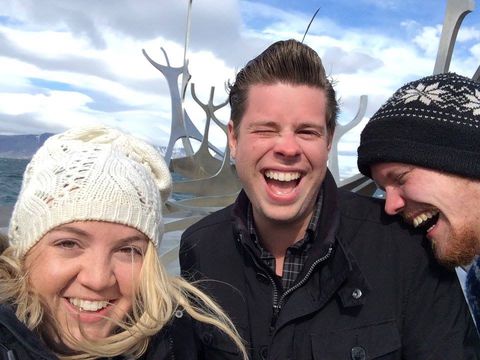 Even before we all had a chance to be together in person, Michael and Hákon’s connection was palpable. They made each other laugh, talked for hours about video games and TV shows, and leaned on each other for support to get through the troublesome minutiae of life. They would sometimes even lovingly team up on me when I needed to be called out, but really, the strength of their bond was forged without me. It was a stark contrast from the fizzled-out friendships of the past, in which Michael and my lovers failed to vibe.

Our throuple disbanded years ago (more on that later), so when I woke up to the photos of Taika Waititi, Rita Ora, and Tessa Thompson three-way making out, I couldn’t help but feel nostalgic (and truthfully, a little bit turned-on). It’s entirely unclear what kind of arrangement these celebrities have—and of course it’s nobody’s business but theirs—but given that I am all too familiar with the prying questions and harsh judgments that come with non-monogamy, I began passively consuming the internet commentary with trepidation.

It was the same old story: bewilderment that three people could be mutually into each other at once, awe at their willingness to be so bold with cameras on them, and declarations that a deviant lifestyle like *that* was nothing short of sinful. Even Marvel formally reprimanded the director for his display. Fortunately there was also a fair amount of support, and claims that Hot Girl Summer had officially begun. I’m sure their hotness and star power help in a way that’s inaccessible for me, but still. Progress is progress.

I frequently have to remind myself that the tendency to view throuples and other non-monogamous relationships without discomfort and disdain is rooted in biases about what love is supposed to look like, and that these tired ideas have no actual bearing on the strength of love shared between polyamorous people. Just because most people grow up with the model that there is only One Right Person for each of us doesn’t mean that what I’ve experienced isn’t real.

I remember worrying that my extensive history with Michael would supersede Hákon’s needs, or that his newness would cause me to ignore Michael—that line from the Schitt’s Creek episode, “The Throuple,” ringing in my ears: “When it comes to three people, David, there’s always a favorite”—but loving two different people is never going to look the same. There was room enough in all our hearts to ensure everyone felt taken care of.

Time management is one of the biggest considerations in polyamory, so much so that it’s common in the lifestyle to joke about Google Calendar being some kind of savior. In my throuple, the long distance made dedicating time pretty straightforward. We each had independent chats going on, while a group chat with the three of us was also in play. Sometimes I would travel to visit Hákon without Michael, and sometimes all three of us would be together. All being together was ideal—the sexual chemistry was supercharged.

It’s rare to find success in polyamory without an excess of communication. (Success, by the way, can look like two memorable years of shared love and affection.) Like many other throuples with experience in polyamory, we laid ground rules, like addressing problems early on rather than letting resentment build.

Though Hákon did not identify as polyamorous before meeting us, our threeway tryst made him realize the lifestyle does in fact suit him. And when we catch up now, there is a shared fondness in recollecting the special relationship we shared.

The time the three of us spent together expanded my capacity for love, increased the amount of support in my life, and yes, featured a record number of super hot threesomes. Ultimately, our throuple ended for many of the same reasons monogamous relationships do: the distance was hard and we were walking through different stages of life. As much as people would love to blame non-monogamy for closing that chapter of our lives, it honestly had nothing to do with it. So even if Taika, Rita, and Tessa aren’t engaged in anything more serious than playful post-vax horny makeouts, the exposure has validated throuples in a way that will outlive the DailyMail pics, giving the lifestyle more of the dignity it deserves. Kiss on, friends.

06/07/2021 Lifestyle Comments Off on Who Knows What’s Up with Taika, Rita, and Tessa, But I Was in an IRL Throuple and Can Give You the Details
Recent Posts