Woman, 30, reveals how a FAKE brain tumour has left her bed-bound for months and losing her vision due to condition that makes her body mimic the symptoms

A woman has shared the debilitating life she leads due to a rare condition where her body acts as though she has a brain tumour – causing her to slowly go blind and remain bed-bound most days due to exhaustion.

Kim Slater, 30, from Bristol, was diagnosed with idiopathic intracranial hypertension (IIH) in December 2019, six months after the symptoms began.

Her GP was ‘totally confused’ by the ‘huge list’ of symptoms but a CT scan revealed the true cause. The condition occurs when high pressure around the brain causes tumour-like symptoms including vision changes and headaches.

IIH is believed to affect one in 100,000 people, has no known cause and no cure – leaving Kim feeling hopeless. 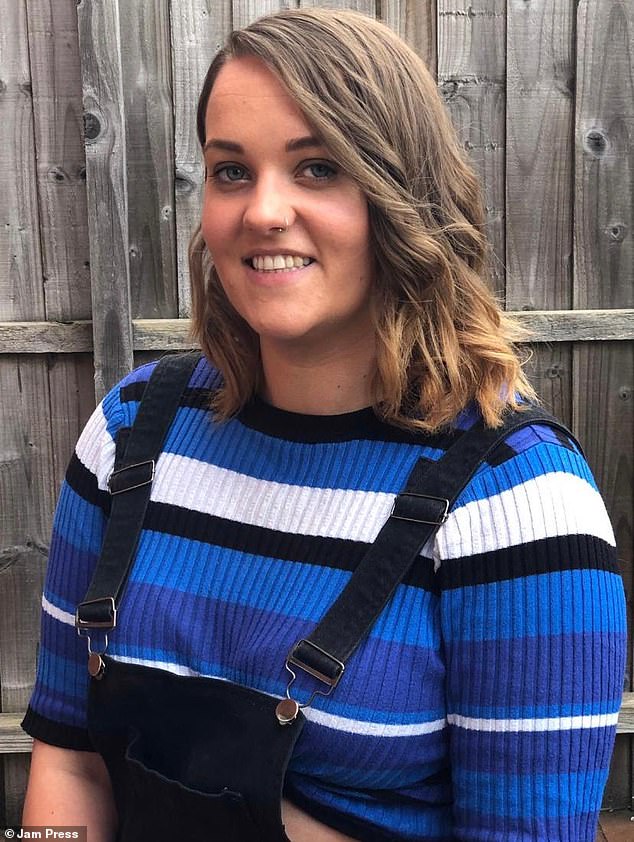 Kim Slater in April 2019 before her diagnosis. She has been left feeling hopeless after finding out there is no known cure 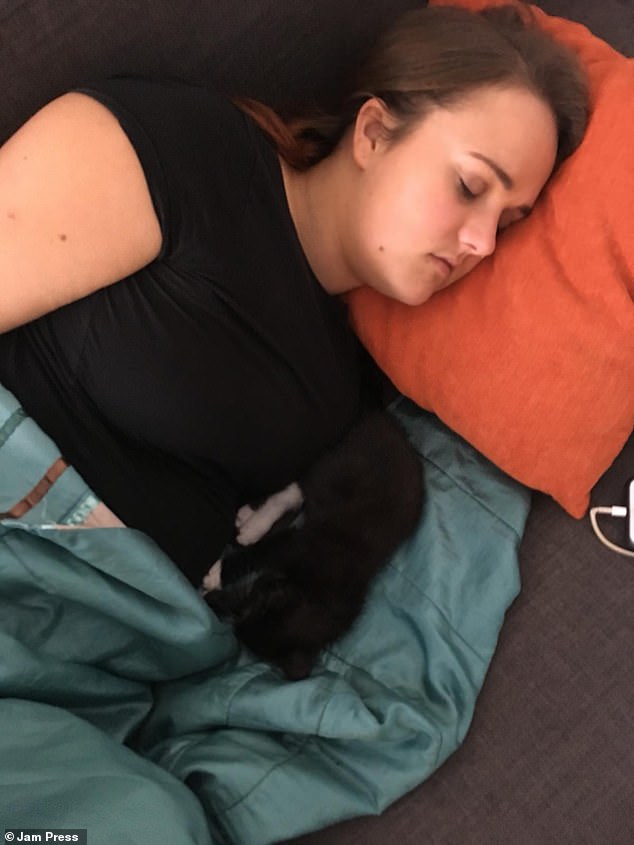 Kim had migraine-like headaches every day when she was diagnosed which left her dizzy, nauseous and emotionally drained. Pictured: Kim Slater resting at a friends house in November 2019 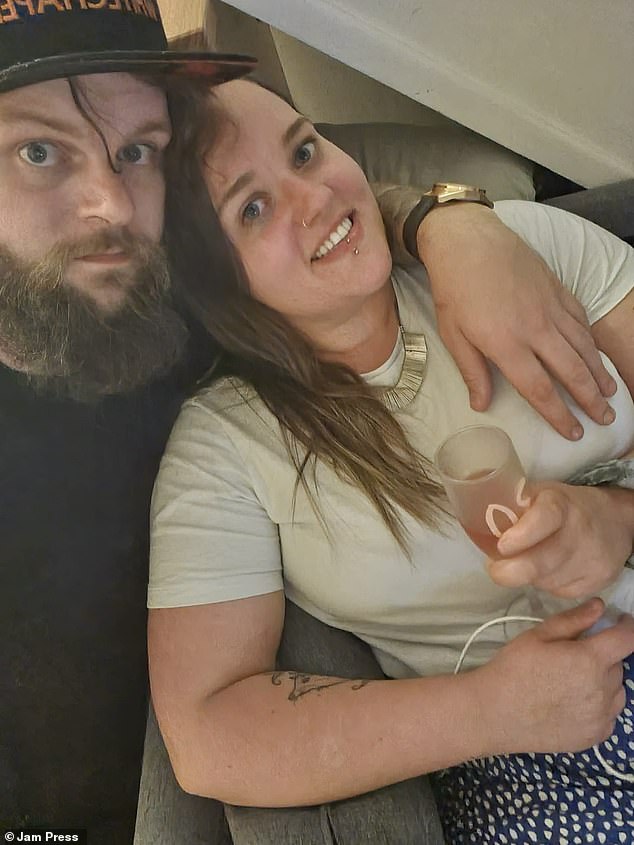 ‘When I was diagnosed, I was at my worst – I had migraine-like headaches every day which left me dizzy, nauseous and emotionally drained,’ Kim explained.

‘The pain was exhausting and I often got confused, couldn’t speak properly and would forget things because of brain fog.

‘My boyfriend Liam moved in and did almost everything for me, from cooking to cleaning, to even helping me to the bathroom on particularly bad days.’

The rare condition means Kim’s body mimics symptoms of a tumour including fluid build-up, which causes headaches, dizziness and fatigue – but no mass comes up on scans. 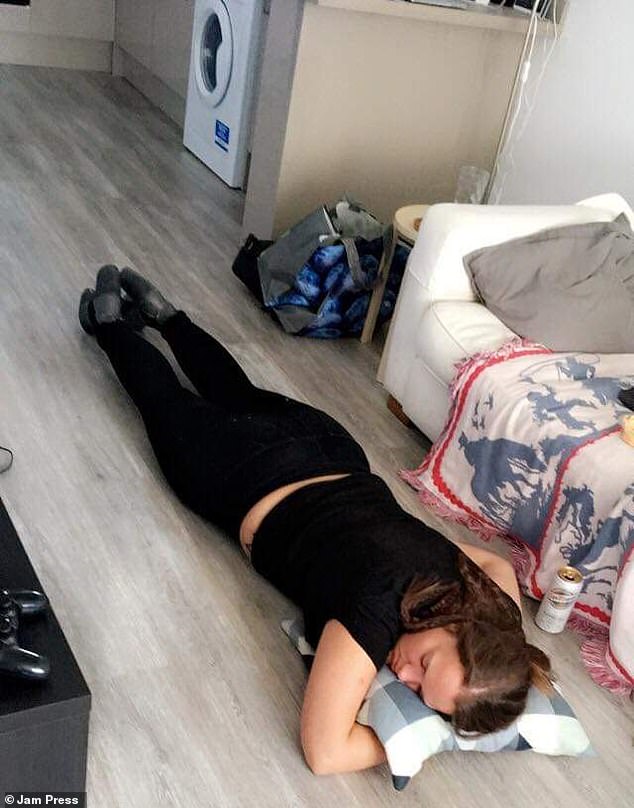 Before diagnosis, Kim was also panicked at the thought she may have a deadly tumour with all signs pointing towards the worst-case scenario.

She initially visited her optician in November 2019 with headache concerns and changes in her vision including blackouts.

She was referred to the eye hospital for tests and went the following day, accompanied by mum Liz, who previously worked as a nurse. 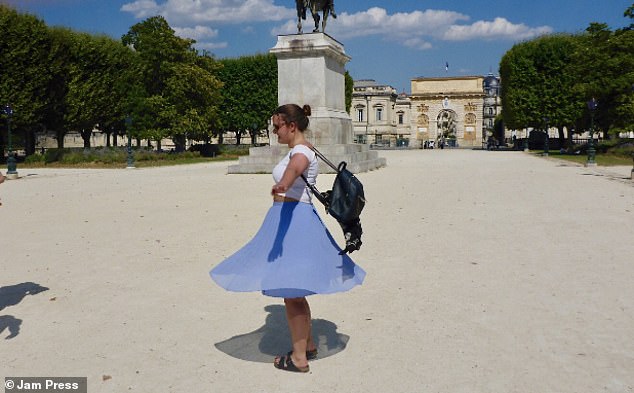 Kim Slater dancing on a day out before her diagnosis. Kim was left feeling deflated after find out IIH has no cure

‘My mum and I started the walk up to the hospital in silence until I broke it and said ‘they’re looking for a brain tumour aren’t they?’.

‘My mum is a straight-talking lady so answered truthfully that yes, they were but we would deal with whatever happened.’

While they waited for the results, said she and her mum used ‘dark humour’ to get through the terrifying ordeal – joking about the young girl’s funeral.

She said: ‘Not knowing what the results would be, I made an effort to think about all the people that were important to me and the things in my life that mattered as I wondered if it would all change after that day. 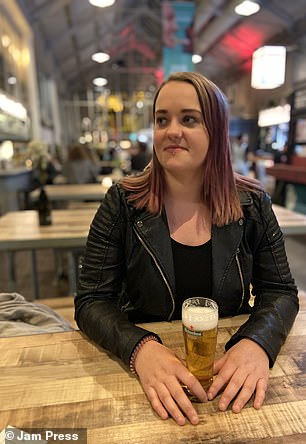 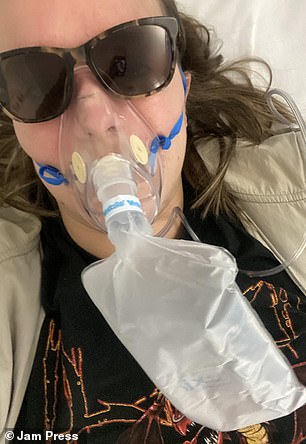 Kim consulted a new doctor who explained there is a link between obesity and IIH – urging her to lose weight to aid her recovery. Pictured: Kim Slater before her diagnosis in early 2019 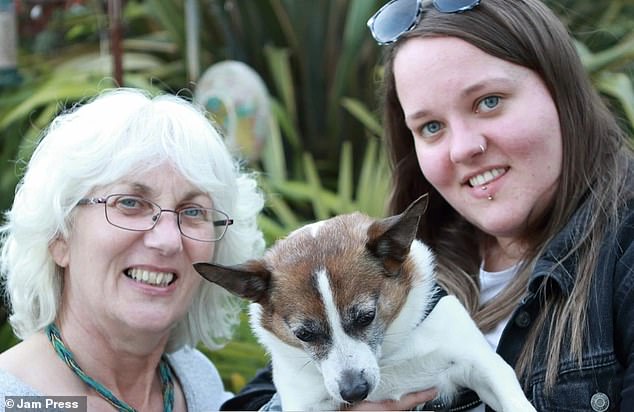 Kim, pictured with her mother Liz, worries about her eyesight every day but feels like she’s stuck choosing between that or her mental health

‘Obviously I felt relieved that it wasn’t a tumour, but I felt deflated too.’

‘I still didn’t have a real answer and in my 10 minutes of research about IIH on the drive home I realised the outcome didn’t look great.’

‘Academically, there were hardly any papers referencing it and all the anecdotal stories seemed to be tragedies about people losing their eyesight or living in pain forever.’

‘I even had moments over the following months when I wished it was a tumour that I could cut out and throw away to get on with my life.’ 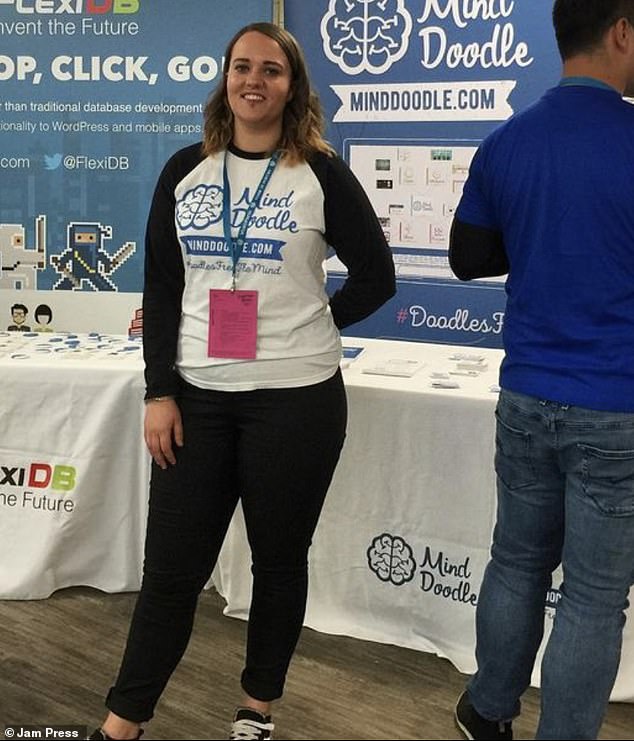 Due to a long history of eating disorders, the thought of losing weight has caused further issues. Pictured: Kim Slater in 2018 before her diagnosis

‘A tumour felt easy to understand, for me and everyone else around me.

‘This just felt messy and I didn’t know what it would mean for my future.’

Following an MRI and lumbar puncture, which measures the force of fluid coming out and helps determine pressure levels, Kim was given her official diagnosis.

Unfortunately, the condition has heavily affected her vision and since then, her eyesight has deteriorated.

Kim consulted a new doctor who explained there is a link between obesity and IIH – urging her to lose weight to aid her recovery.

Unfortunately, due to a long history of eating disorders, this caused further issues.

She said: ‘I consider myself recovered but it’s still in the back of my head every day, and it came back with a vengeance when I was stuck in bed and felt worthless.

‘I worry about my eyesight every day but I feel like I’m stuck choosing between that or my mental health.’ 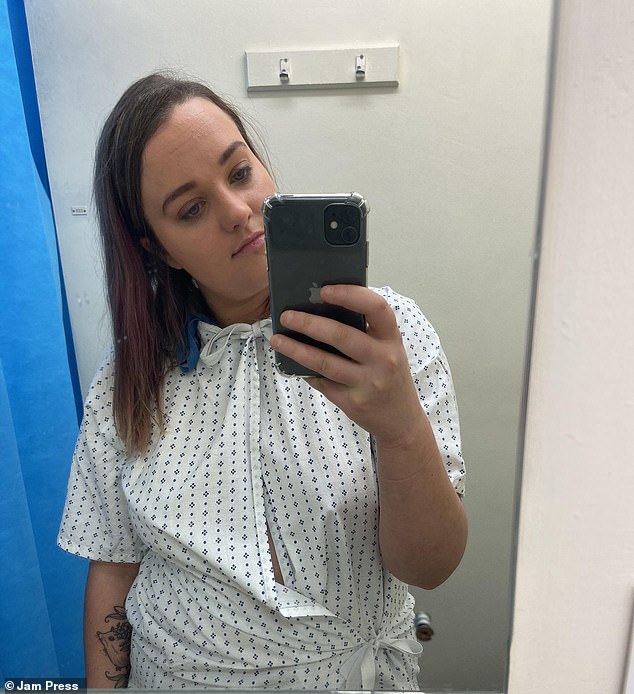 Now, Kim’s options are limited and she may be facing a ‘worst case scenario’ procedure of having a shunt drain the fluid from her brain to her stomach. Pictured: Kim Slater on the day of her MRI

Liam became her carer when she had to put her career goals on hold and take time out to focus on her health after graduating from university. Pictured: Kim Slater and her boyfriend Liam at her 30th birthday party

‘I would rather end up blind than be pushed into suicide by my eating disorder.’

Since then, Kim has largely been left to fend for herself, with family members and her partner stepping in to help look after her.

Liam became her carer when she had to put her career goals on hold and take time out to focus on her health after graduating from university – with Kim even remaining bed-bound for four months.

Luckily, Kim has now found a neuro ophthalmologist and GP who are more considerate of her history, and who treat her without mentioning her weight. 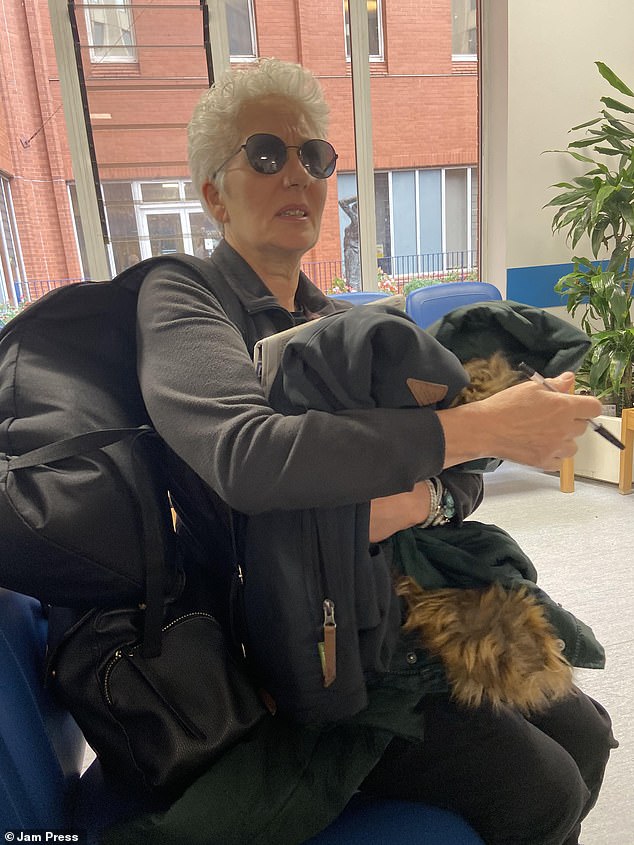 Although she has been prescribed pain medication, in the last month it has stopped working. Pictured: Kim Slater’s mum Liz on the day of her diagnosis 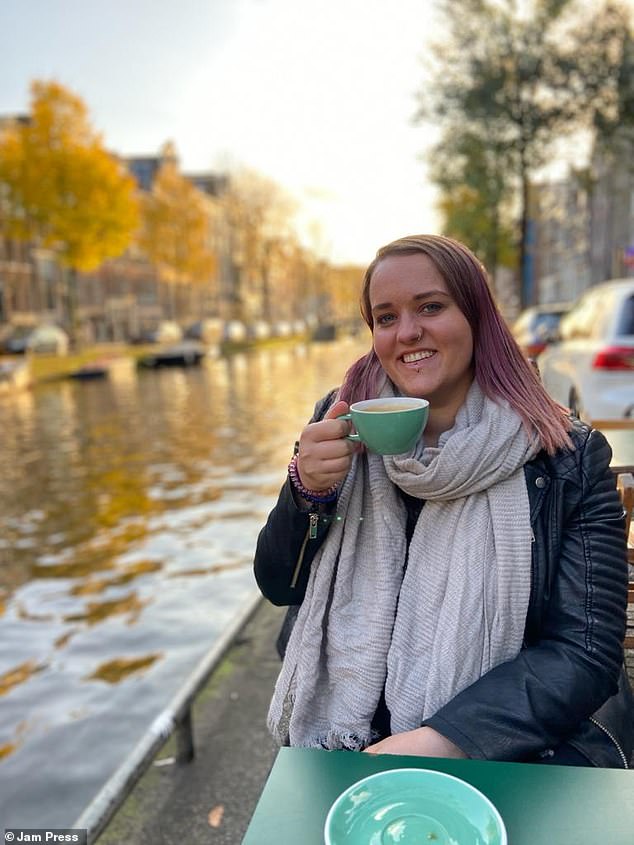 Along with the risk of blindness, Kim’s chances of a stroke, brain aneurysm, or cardiac event are also increased. Kim Slater in Amsterdam in 2019, just weeks before her diagnosis 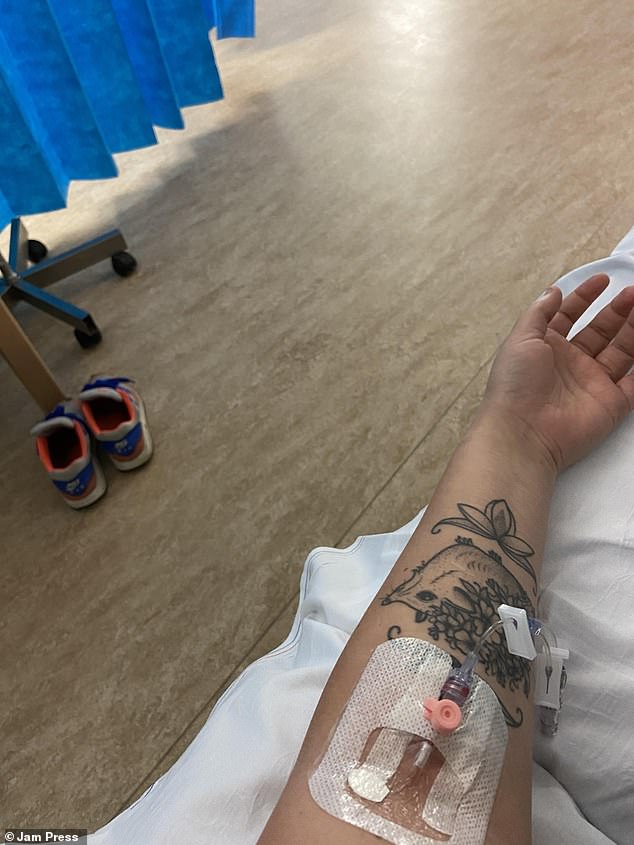 Kim is learning to live with it and get support from the IIH community online. Pictured: Kim Slater in hospital in January 2021 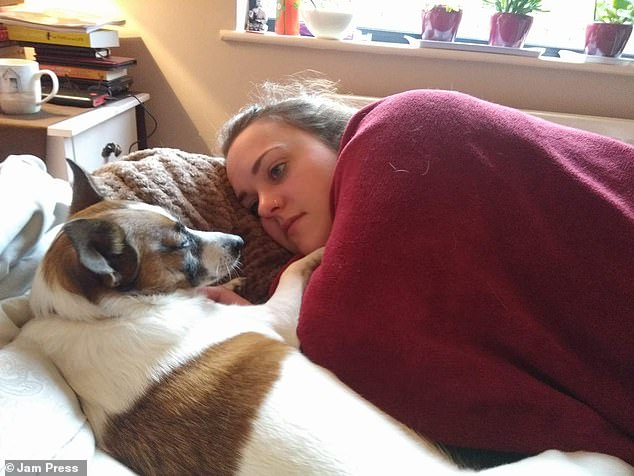 Kim is not confident in her doctors – and wonders if they will they refuse to give her treatment because she hasn’t lost weight. Pictured: Kim Slater with her dog Poppy

Although she has been prescribed pain medication, in the last month it has stopped working.

WHAT IS IDIOPATHIC INTRACRANIAL HYPERTENSION?

Acute. Symptoms happen suddenly, often because of a head injury or stroke.

Chronic. Symptoms develop over time. They may be caused by an underlying health problem.

Idiopathic. The cause isn’t known.

Who is at risk for IIH?

People who have a thyroid condition or chronic kidney failure

How is idiopathic intracranial hypertension treated?

Limiting fluids or salt in the diet

Having a spinal tap done to remove fluid and reduce pressure

Taking medicines, such as water pills (diuretics). These help the body to get rid of extra fluid.

She said: ‘The whole experience has left me incredibly cynical about the medical industry and the weight stigma that I’ve had to go through.’

‘I’m scared of going blind but mostly because I don’t know how I will function.’

‘The actual experience of going blind doesn’t scare me as much as you might think – I’ve always handled whatever is thrown at me.’

‘Through years of therapy I have realised that, while some things you can change, you might as well get on board with the things you can’t and learnt to accept things the way they are.’

‘But [I wonder] how will I relate to the world if I do lose my eyesight? Will I lose my independence? Will I feel even more isolated?’

‘The scariest part for me is feeling out of control.’

Now, Kim’s options are limited and she may be facing a ‘worst case scenario’ procedure of having a shunt drain the fluid from her brain to her stomach.

She added: ‘I’m not confident in my doctors – will they refuse to give me treatment because I haven’t lost weight?

‘Day to day I struggle and am in pain every day.

‘I still have to fight that voice telling me it’s my own fault and if I was skinny I’d be OK.’

Kim rarely sees her friends and spends most weekends in bed, with Liam around to support her, something she’s ‘eternally grateful’ for.

She added: ‘I have no idea what my future looks like and I’m very conscious that I may have to give my career up at any point.

‘Along with the risk of blindness, my chances of a stroke, brain aneurysm, or cardiac event are also increased.’

‘I’m learning to live with it and get support from the IIH community online.’

‘It’s not easy at all, but all I can do is make the most of today and live in the present without being too hard on myself.’

09/08/2021 Lifestyle Comments Off on Woman, 30, is left blind and bed-bound by a fake brain tumour
Recent Posts