No drinking, no play-wrestling, and a midnight CURFEW: Wife gives her husband and his friends a VERY strict list of rules for bachelor party – but comes to surprising decision after being told she ‘can’t control him’

An insecure and controlling wife is being called out for the extremely strict list of rules she gave her husband ahead of a friend’s bachelor party — rules she expected all of his friends to follow as well.

The woman, who is unidentified, wrote on Facebook that she was banning the men from drinking, smoking, doing drugs, driving fast cars, gambling, hiring strippers, and play-wrestling, among other things.

But after commenters called her and said she couldn’t control what her husband does when leaves the house, she had a change of heart — and decided not to let him go the party at all. 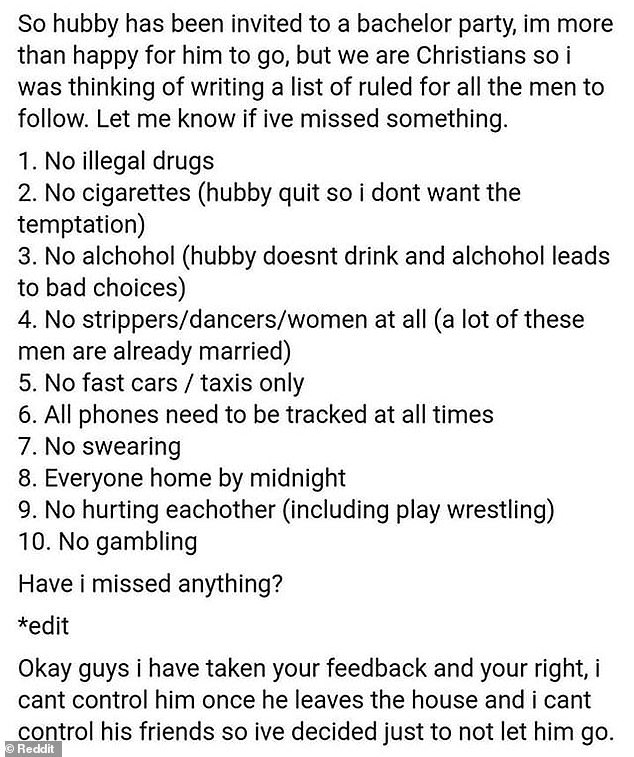 Yikes! A woman drew up this very strict list of rules for her husband ahead of his friend’s bachelor party

‘So hubby has been invited to a bachelor party, I’m more than happy for him to go, but we are Christians so I was thinking of writing a list of ruled [sic] for all the men to follow,’ she wrote on Facebook.

‘Let me know if I missed something,’ she added before listing ten different rules.

Her rules included ‘no illegal drugs’ and no cigarettes — the latter because her ‘hubby quit’ and she doesn’t want him to have temptation.

She also banned alcohol (‘hubby doesn’t drink and alcohol leads to bad choices’), strippers and dancers, and driving fast cars, advising them to only use taxis as a means of transport.

She prohibited swearing, gambling, and ‘hurting each other (including play-wrestling)’.

She also that each of their mobile phone’s had to be tracked for the duration of the party, and that everyone had to be home my midnight.

While she seemed to think that she’d get support from her friends on Facebook, she instead got a lot of criticism.

But it can’t be said she’s not open to feedback, as she soon updated the post saying she changed her mind.

Since she shared the post on Facebook, a screenshot was posted on Reddit, where it has gathered quite a bit of attention from people who can’t believe the woman set out such a strict set of rules for her husband.

More than 2,000 people commented on the post on the social forum, revealing that they were shocked at the strict rules.

Many branded the relationship ‘abusive’ and said the woman’s controlling behavior was a cause for concern.

Shocked: More than 2,000 people have commented on the post on Reddit, with many revealing they were shocked at the woman’s efforts to control her husband

One Reddit user said: ‘Abusive relationships will often have the abusive partner attempt to control access to friends and family to keep them from seeking help or support outside the home.

‘While it is less common for a man to be abused by his wife, it does happen. This post is an example of such an abusive relationship,’ they added.

One user, who was shocked at the woman’s post, said: ‘On a serious note, if your best friend is ever in a relationship like this, rescue him, because that’s coersive control and it’s a form of abuse, no-one deserves to live like that.’

‘For anyone who doesn’t see this for what it is, here is what she means by what she said…,’ another user said.

The user continued: ‘This is an unhealthy and probably emotionally abusive relationship. It is never the job of one spouse to “control” the other (with the possible exception of them not being in their right mind, e.g. blackout drunk and/or trying to hurt someone or themselves).

Odd: Others, who were also shocked by the list of rules, mocked the guide by jokingly creating other rules to add to the list, including that guests can only use ‘one lump’ of sugar in tea

‘If they really are Christians they should know this is not a healthy relationship, and that it is not your job to control your spouse.’

Another said the man in question should ‘divorce’ his wife for creating the set of rules, while one more joked that the woman who made the rules would be at the party ‘enforcing’ a three-inch distance between guests.

Another commented on the post, saying they wished they ‘never discovered reddit’ because they wouldn’t have known about the woman.

Another said: ‘LMFAO I’m trying to imagine one of my friends pulling this list out at a bachelor party and telling us that these are the rules his wife set out for us. My God the verbal obliteration they would get would be legendary.’

Another said they would use the list of rules as a ‘bucket list’ for the bachelor party.

Others mocked the woman by jokingly creating other rules to add to the list, including ‘teacups must be used with saucers’ and ‘veggies and ranch dressing can not be on the same table’.

‘And no one is allowed to use excessive sugar in their tea,’ another said. ‘One lump only, we are Christians not monsters!’