Mother who says her friend is ‘odd’ for using ‘extreme’ measures to follow the COVID-19 guidelines during a picnic with their young babies, divides opinion – as critics argue maybe she’s the one who is too relaxed

A mother who felt on edge while at a socially distanced picnic with a friend has sparked a heated debate about how closely the government’s covid-19 guidelines should be followed.

Posting on Mumsnet, the anonymous woman who lives in the UK, explained that she’s considering confronting her friend about the way she behaved during a picnic and walk they had with each of their six-month-old babies.

She said the afternoon was quite stressful because her friend kept reminding her to stay at least 2 metres apart and scolded her for touching her son’s blanket when it fell from the pram.

Responses to the post were divided as many people agreed her friend was being too strict about following the guidelines, while others argued the friend has done nothing wrong and it’s important to do what has been recommended. 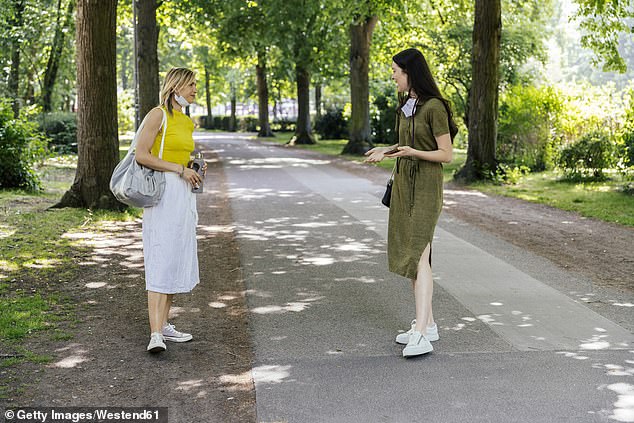 Describing her friend as ‘odd’, the woman wrote: ‘I met a friend for a walk / picnic yesterday. We’ve both got small babies (6 months)/ It’s the first chance we’ve had to meet and I was really looking forward to it.

‘Turns out I found the afternoon quite stressful and didn’t enjoy it. We started off having a walk but every few minutes she was reminding me to stay away from her and the baby and pointing out that I had broken the 2m “barrier”.

‘I hadn’t done this on purpose and I’m well aware of how to distance, but some paths were smaller than others so it wasn’t possible to be exactly two meters apart, although we weren’t far off!! Yet she kept pointing out that I was less than 2m.

‘I’d taken a lunch bag with me and the basket in my pram was already quite full, she didn’t have anything in hers so I asked if I could put my lunch bag under her pram.

‘She told me it wasn’t safe for me to do that because it’s risking spreading Covid. I didn’t say anything about this, I just carried my own bag.

‘We sat down and ate our picnic and I suggested we let the babies play together but she was really against this idea and said the babies should distance. 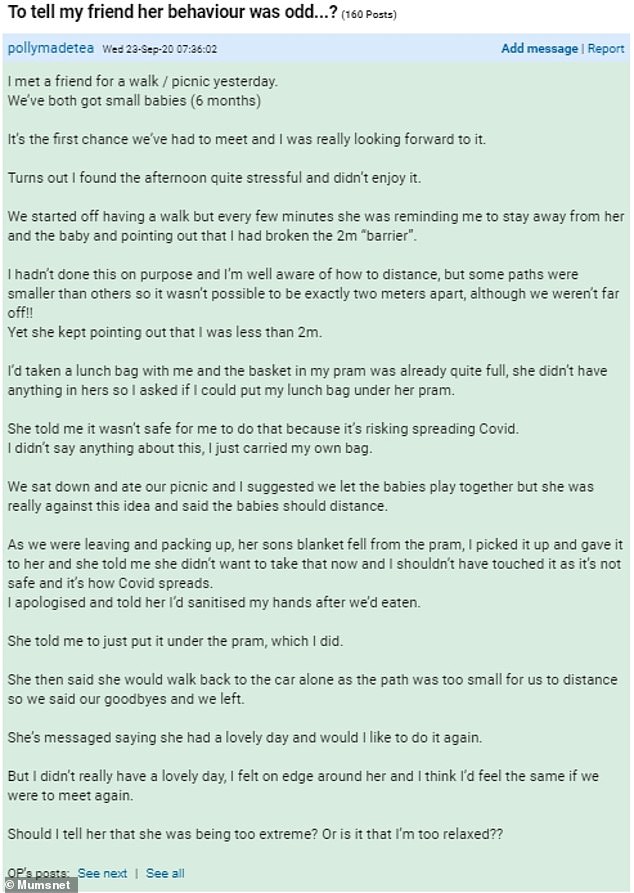 ‘As we were leaving and packing up, her sons blanket fell from the pram, I picked it up and gave it to her and she told me she didn’t want to take that now and I shouldn’t have touched it as it’s not safe and it’s how Covid spreads.

‘I apologised and told her I’d sanitised my hands after we’d eaten. She told me to just put it under the pram, which I did. She then said she would walk back to the car alone as the path was too small for us to distance so we said our goodbyes and we left.’

Revealing that she’s considering confronting her friend, the woman added that her friend sent her a nice message saying that she enjoyed their time together.

Initial responses urged the woman to consider how she can help to ease her friend’s anxiety and admitted they were unsure if she should tell her about feeling uncomfortable during the picnic.

One person wrote: ‘She sounds very anxious. Maybe try asking her if she’s okay, rather than accusing her of being too extreme?’

Another said: ‘…I worry about people’s level of anxiety and she might be struggling, or she might just be highly adherent to the guidelines. She sent you a polite message, I would do the same.’

Others argued with the rising number of transmissions, the friend didn’t do anything wrong by wanting to follow the current government guidelines.

‘This issue is, nothing she did is actually wrong. Picking stuff up and passing it to people is increasing your risk. Getting closer than 2m is going to increase risk. So I wouldn’t say odd as such, but very strictly adhering to the rules,’ one wrote.

Another said: ‘A lot of the comments on here show exactly why the transmission rates have gone up. We need people like OP’s friend who are strictly following the rules. Otherwise the rules will become more and more strict. The amount of people assessing the risk as low because they see no evidence of symptoms is exactly why the virus is spreading.’