Energy giant Woodside has criticised a levy slapped on all offshore oil and gas producers to recoup costs of cleaning up a rig formerly owned by the company, widening the rift between the federal government and industry over the decommissioning process.

Ownership of the now defunct Northern Endeavour production vessel, permanently moored 550 kilometres offshore from Darwin in the Timor Sea, fell to the Commonwealth in 2019. 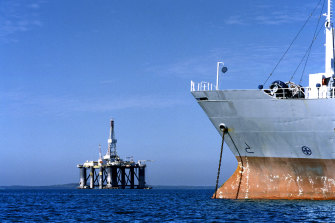 A levy has been imposed across the offshore oil and gas industry after a minor production company entered liquidation, creating a risk that taxpayers would foot the clean-up bill.Credit:Rob Homer

Federal Resources Minister Keith Pitt has said taxpayers would not foot the clean-up bill, and he imposed a levy on the entire industry of 48¢ a barrel, payable from July 1.

It is expected to cost industry about $367 million a year and the Northern Endeavour clean-up, which is out for tender, has been estimated to cost up to $1 billion.

Without a levy, taxpayers would have to pay for the removal of the large metal structure to prevent oil spills polluting the ocean, creating safety hazards for shipping and plugging surrounding wells in the ocean floor.

Woodside Petroleum acting chief executive Meg O’Neill said: “The levy is a very blunt tool. We remain committed to working with our colleagues in industry and the government to find an effective long-term decommissioning framework for Australia.”

NOGA was new to offshore petroleum production when it bought the Northern Endeavour from Woodside in 2016. Woodside had operated the vessel for 15 years and had previously slated the facility for decommissioning.

Ms O’Neill said it was “very unfortunate” that NOGA entered bankruptcy, but such sales were commonplace in more mature petroleum markets such as the North Sea and Gulf of Mexico.

“The sale to NOGA was done with full expectation that that player will be able to generate enough revenue to cover the decommissioning obligations,” Ms O’Neill said. “Those obligations were very clearly communicated at the time of the sale.

“It’s a very common practice for the major players to sell assets as they approach end of life to companies that are smaller and can manage to extract additional value from those assets.”

Sources in the energy industry not authorised to speak to the media said rival producers were furious at Woodside’s sell-off of the Northern Endeavour and blamed it for the levy and potentially onerous financial regulations.

The petroleum industry has described Mr Pitt’s levy as “over the top and extreme”.

In June, Australian Petroleum Production and Exploration Association (APPEA) chief executive Andrew McConville said: “Any levy is unreasonable in any form, but one being so extreme will be a major disincentive for investment at a time when policy stability and certainty is critical.”

Mr Pitt is pursuing reforms to prevent a repeat of the Northern Endeavour situation.

A bill going through Parliament would create a “trailing liability” law to give government call-back powers to force previous owners of an asset to pay for decommissioning if the current owner cannot – as in the case of NOGA with Northern Endeavour.

It looms as a financial cliff for the offshore petroleum companies, with the government estimating the industry’s total clean-up bill at $52 billion.

APPEA is opposed to the call-back law, arguing it would “potentially encourage the final titleholder … to walk away from the property and reallocate decommissioning costs to former titleholders”.

The Business Briefing newsletter delivers major stories, exclusive coverage and expert opinion. Sign up to get it every weekday morning.