Peter Drew often makes art about identity but COVID-19 inspired him to create a very different piece – one he decided to share with people around the country.

A simple drawing of a figure hugging another figure, the image resonates, especially for those in Victoria as they process news of an extended stage four lockdown. 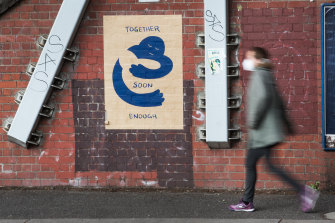 Called the Hugs poster, it's a message of hope and an expression of solidarity. Drew says it's about missing our loved ones and affection, and comments on the irony of having to stay apart from our loved ones in order to protect them.

Based in Adelaide, where life has returned largely to normal, Drew decided months ago to make the poster available to anyone who made contact. Between mid-April and mid-August, he sent almost 400 copies all over Australia, as well as a few dozen overseas; about 100 went to Victoria. Interested parties make contact and he sends them the screenprinted poster, complete with instructions for how to make glue.

"It's fun, they get a chance to claim ownership of a public space at a time when they're sort of being pushed out of public space," Drew says.

The 37-year-old artist wanted to make a statement about the pandemic. "Stay home, wash your hands, all these authoritative messages… as an artist you don't want to be saying the same thing that the authorities are saying, it's kind of redundant," he says. "This is something we are all going through, this missing of affection."

You may have seen Drew's work around town: The word 'Forgive' and its definition, a poster declaring 'Real Australians Say Welcome' or the AUSSIE series, made with photographs of Australians who had sought exemption from the White Australia Policy.

The image of Monga Khan is the best known, often plastered over walls in metropolitan cities across the country – sometimes by Drew himself. "When I saw his photo in the archive in Victoria, I thought, 'That's the guy'. Because he looks like a hero, he looks like somebody you want to be. As soon as I saw him, I thought that's the whole project in a way."

Drew continues to paste up the AUSSIE posters; the project is something of a life's work: "I want to keep doing this until I drop dead." 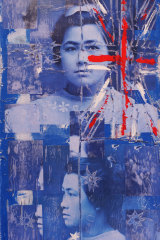 Dorothy Sym Choong, circa 1920, from the show Flags, by artist Peter Drew.Credit:Peter Drew

Flags 1, an exhibition of Drew's latest work at Peter Walker Fine Art in Adelaide, extends the ideas raised in the AUSSIE series and incorporates the Australian flag.

The works were created by "attacking the flag with power tools", an idea that might seem sacrilegious. For Drew, it's almost the opposite. "What I am doing is a sign of respect for the flag because I think the flag is durable and can withstand criticism. To treat it as if it were sacred and therefore vulnerable misunderstands what a secular symbol is," he says. "The nation state can withstand criticism from its people."

Drew hopes the works will contribute to a larger conversation. "Obviously Australia is a big, complicated place, the flag gives us an overly simplistic idea of that. I'm sort of pushing the details back in, the details are there, you just need to scrape away the surface and you can see them."

All of Drews works sold on the first day of the show, the National Gallery of Victoria being one of the buyers. The NGV and the Art Gallery of NSW already own posters from the AUSSIE series.

For Drew, political discussion these days is polarised – and "usually just 140 characters and people blasting each other". Art plays a very different role: you sit with it and contemplate it.

"National identity is always unresolved and changing, that's the job of culture and art is to keep … it fluid," he says. "It's the question of change, whether reform or revolution – you need to keep the door of reform open, otherwise you build up this reservoir of discontent."

09/09/2020 Lifestyle Comments Off on Yearning for affection? A simple hug? You’re not alone
Recent Posts
We and our partners use cookies on this site to improve our service, perform analytics, personalize advertising, measure advertising performance, and remember website preferences.Ok