It is thought to be romantic – even old fashioned – to desire a "soulmate", but psychotherapist Esther Perel says expecting your partner to fulfil all of your emotional needs is a very contemporary concept.

"This notion that the couple becomes the unit for affection, for trust, for intimacy, the sharing of your internal life is a complete revolution," says Perel, the Belgian-born, New York-based psychotherapist who is rethinking modern romance. 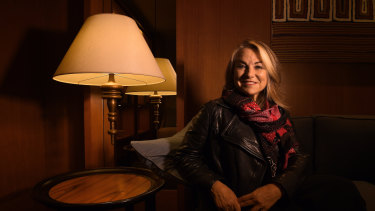 Psychotherapist and bestselling author Esther Perel thinks we expect too much from our partners.Credit:Kate Geraghty

"The line I always use is: 'You're asking one person to give you what an entire village used to provide.'"

Perel is something of a celebrity therapist. With two bestselling books – her first, Mating in Captivity, has been translated into 24 languages (she speaks nine) – and a popular podcast recorded within her clinic, Perel draws on 35 years of counselling couples to present unique views on modern relationships, including that individuals should not expect fulfilment from one person.

The obvious question is: where else should they look?

In the past, Perel says platonic and gendered groupings provided much of the support people now expect from "the one", although her second book, The State of Affairs: Rethinking Infidelity, presented what some viewed as a more compassionate view of a different route: adultery.

Perel says the idea that she endorses cheating is a "complete bastardisation" of her work ("I've said good can come out of a crisis; that doesn't mean I think the crisis is a great thing"), but also believes "the victim of the affair is not always the victim of the relationship".

Does she endorse polyamorous relationships? Yes, but "it's not for everybody".

"It is a model that presupposes massive egalitarianism and free choice," Perel says.

In her podcast, Where Should We Begin?, Perel talks anonymous couples of all ages and sexualities through their problems. She is currently working on the third season, which will focus on workplace relationships. Unlike many relationship advice programs, Perel says 40 per cent of her listeners are men.

"I don't necessarily embrace a view of intimacy that has undergone a feminisation… so men feel less judged, as do the women."

In Sydney to deliver a talk on "modern love and the digital age" on Sunday as part of the Vivid festival, Perel's opinions on how technology is affecting our relationships are mixed.

She is neither here nor there on dating apps ("it's fine to have an algorithm replace a grandmother… but we have done away with the ambiguities of seduction") and thinks the way couples "curate" their social media presence has warped our perception of what the average relationship looks like.

"In the village, you could hear every fight with your neighbour," Perel says. "Today, your best friend can tell you she's having a break-up and you didn't even know it was coming."

She wonders if that is why so many like listening to her podcasts: they are an insight into the relationships of others we no longer receive.

What are the issues Perel predicts will be brought up in couples' therapy 35 years from now? She is doubtful relationships will even exist.

"The future is Japan: sexlessness, cyborg life, childlessness… I don't know if it will be healthier or not. Although, if we don't have a planet it doesn't really matter."