There was a time when Tom Brady did not play in and win Super Bowls. Sure, it was when Copernicus was trying to figure out which direction the Earth moved, but the time did exist.

Sunday was not one of those times. The Tampa Bay Buccaneers soundly defeated the Kansas City Chiefs, 31-9, in a game that lacked any and all drama, much like an episode of “Frasier.” His victory means that Brady and the writer of this piece have now combined for seven championship rings. Congratulations to all.

The game itself wasn’t competitive, but there were plenty of interesting things that happened off the field — and, for some brief moments, on it. How could there not be? Super Bowl Sunday is a longstanding American tradition featuring hours of a corporate advertising bonanza disguised as a football game, with celebrities giddily taking part. We’re going to have some stuff to chat about.

This is the dynamic that creates glowing pregame tributes to frontline workers who are fighting the coronavirus, while at the same time showing shots of crowded stands. There were glossy segments highlighting the N.F.L.’s commitment to equality, with nary a mention of Colin Kaepernick. That fell to Mariah Carey, who posted on Twitter, “Happy Colin Kaepernick Appreciation Day!”

If you were focused on the game — and managed to stay focused even as the game got out of hand — we salute you. But maybe you stepped away for a drink refill. Maybe you fell asleep. Maybe you were The Weeknd and had to prep for a halftime performance. Here are some things you might have missed.

I’m sorry, let’s try that again. THE PUPPY BOWL!!!!!!!!!! The true Big Game took place with canines, as it does every year thanks to Animal Planet. (It’s pretaped, but still.) This year’s sweetheart was a puppy named Chunky Monkey, who ran onto the field and promptly fell asleep, much like most of the Chiefs defense would appear to do hours later.

This game actually had drama too, because Team Ruff scored a last-second touchdown to defeat Team Fluff, 73-69.

That was the entire commercial and that’s the exact quote. I have it memorized. Oatly’s Instagram account later posted an image of Petersson wearing a shirt with his image on it that reads, “I Totally Hated That Oatly Commercial.”

The most famous coach in N.F.L. history gave an inspirational speech before kickoff — well, a hologram that looked like him did. It was a bit odd — given that Vince Lombardi looked like a video game character — but we’ll give the N.F.L. credit for thinking outside the box, and then coding those thoughts.

Miley Cyrus’s pregame concert — remember concerts? — was outstanding, featuring her collaborating with Billy Idol and Joan Jett. She performed a handful of covers, but the best performances were with Idol (“Night Crawling,” “White Wedding”) and Jett (“Bad Karma, “Bad Reputation”).

Bruce Springsteen — which translates in New Jerseyese to “Deity” — appeared in a spot for Jeep, his first commercial ever. The commercial — titled “The Middle” — had plenty of political overtones and showed shots of Kansas and of Springsteen briefly driving around in a Jeep, somberly staring and urging a return to — ahem — The Middle.

“The middle has been a hard place to get to lately,” Springsteen said in a voice-over. “Between red and blue, between servant and citizen, between our freedom and our fear. Now, fear has never been the best of who we are. And as for freedom, it’s not the property of just the fortunate few. It belongs to us all. Whoever you are. Wherever you’re from. It’s what connects us. And we need that connection. We need the middle.”

After decades of refusing to do commercials, Springsteen finally took the plunge with a message of platitude-filled centrism while trying to sell a car. It was all a bit jarring.

The most excitement from the game came late in the contest, when a fan ran onto the field, eluding security guards. He pulled his pants down and made his way into the end zone, which is one more successful end zone trip than the Chiefs had all night.

Unfortunately, this did not appear to be a spontaneous act. It was apparently a stunt by a pornography website. Commercials aren’t the only way the Super Bowl is about marketing!

At least there was this radio call of the interruption by the broadcaster Kevin Harlan.

The Weeknd performed a delightfully weird — but innovative — halftime show, featuring backup dancers wearing bandage masks, a gospel choir and a dancing stroll through a bright gold hall of mirrors. This spawned several memes and at least some bouts of dizziness.

Amanda Gorman, the 22-year-old poet, has become nearly ubiquitous in American culture after her recitation at President Biden’s inauguration last month. In her latest high-profile appearance, she delivered a new poem, “Chorus of the Captains,” in a taped pregame segment. It honored a nurse, a teacher and a U.S. Marine Corps veteran who had been selected as honorary captains to participate in the coin toss. It was the first time the Super Bowl had featured a poet.

9. Lots of Maskless Partying in Tampa

Inside Raymond James Stadium in Tampa, Fla., the signs reminding attendees to wear masks were everywhere, and fans milling around were holding placards with the same information. But mask compliance was spotty at best once the game began.

In an awkward moment, the actress Rebel Wilson was shown on the stadium’s video screens in a luxury suite, and neither she nor the bulk of her group were wearing masks. Perhaps prompted by her handlers, she laughed and put a mask on, but the people around her didn’t. The same was true for many fans, who were gently reminded that the stadium’s rules required the masks, but who didn’t appear to be getting punished if they chose not to comply.

The raucous crowds just outside the stadium after the game were far more intense, with fans celebrating Tampa Bay’s win in huge gatherings without a mask in sight. 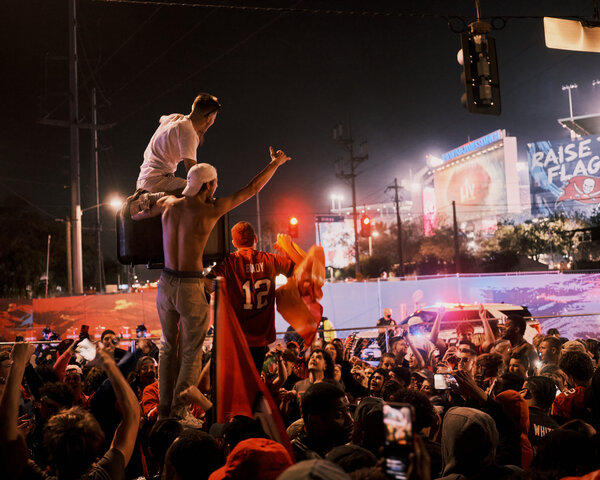 Let’s be honest: Unless you are a Buccaneers fan, you probably didn’t watch the whole thing. But you’re in luck, because we condensed the game into 49 seconds. Enjoy! 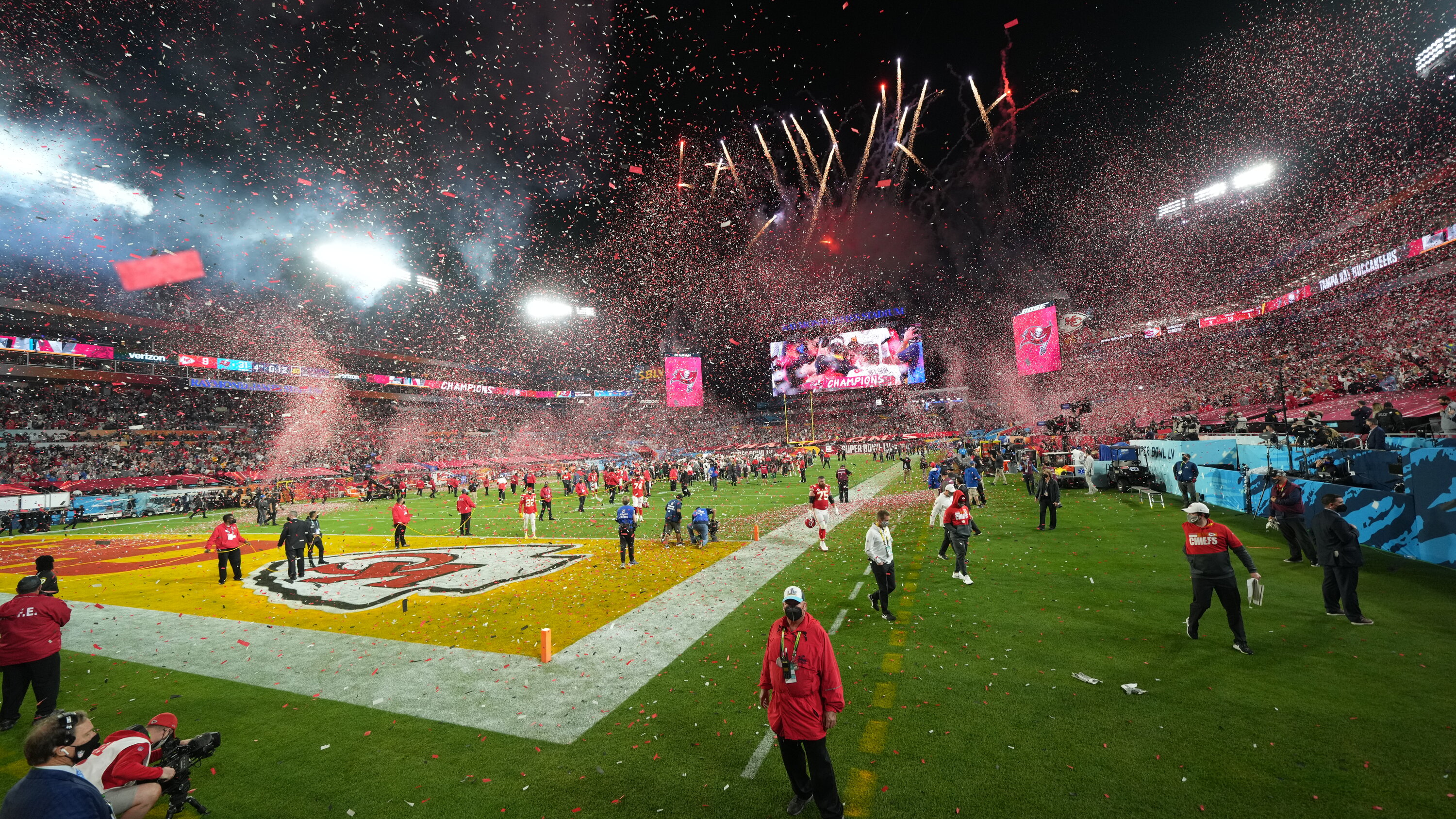