“I’ve been working so hard, but I didn’t think it would pay off like this,” Anisimova said in her postmatch remarks on court. “This is honestly more than I could ask for.”

Anisimova, born in the United States to Russian immigrant parents, will face Ashleigh Barty, the No. 8 seed, on Friday for a place in what would be either player’s first Grand Slam singles final.

Barty, a versatile Australian who once quit elite tennis to focus on cricket, defeated Madison Keys of the United States, 6-3, 7-5, on Thursday.

The other semifinal will match the British veteran Johanna Konta against Marketa Vondrousova, an unseeded 19-year-old left-hander from the Czech Republic. Konta, 28, had never won a singles match at the French Open until this year.

“Well, nothing surprises me anymore in tennis,” said Halep, referring to the wide-open nature of the women’s game.

Thursday’s matches were played simultaneously: Barty and Keys on the Suzanne Lenglen Court and Halep and Anisimova on the main Philippe Chatrier Court, where Halep finally broke through last year to win her first major title.

But she was unable to summon the same consistency and clutch shotmaking against Anisimova, missing several big opportunities to take control of the second set.

Instead, Anisimova closed out the match with a backhand down-the-line winner and then dropped her racket on the red clay, covered her face with both hands and said, “What?” in the direction of her coach, Jaime Cortes. 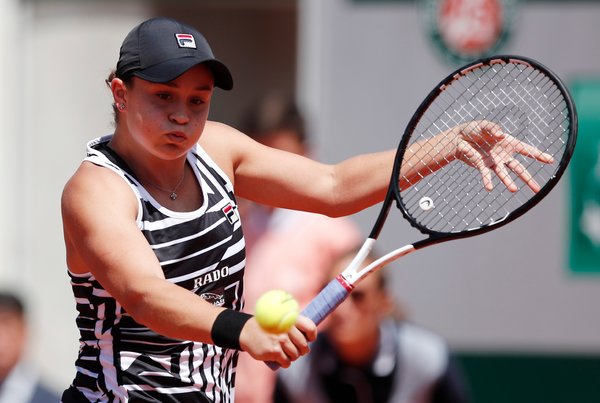 Others in the stadium also were surprised at how Anisimova managed her first major quarterfinal.

Evert was a teen phenom herself, reaching her first Grand Slam semifinal at age 16 at the United States Open with her avant-garde two-handed backhand. That shot has become the standard in women’s tennis since then, and few have hit it as well as the young Anisimova.

That stroke is also Halep’s signature, but Anisimova repeatedly held her own or better in the backhand exchanges and was also able to generate rally-controlling pace with her forehand. She showed tactical variety too, hitting drop-shot winners after pinning Halep deep in the court with her baseline power.

“I knew if I wanted to win today I had to do something different, because it’s not an easy match to win,” Anisimova said. “I’m really happy with my performance because this is one of the best matches I’ve ever played.”

Anisimova is no bolt from the blue. She was the United States Open junior champion and a finalist at the French Open junior event. Signed by management agency IMG at an early age, she, her family and her advisers have carefully plotted out her path to the top.

She might have broken through earlier if not for a foot injury last year at the Miami Open, which forced her to miss the clay-court season. But she reminded the tennis world of her potential at this year’s Australian Open, becoming the youngest woman to reach the fourth round in 13 years.

After winning her first career title, in Bogotá, Colombia, in April, also on clay, she has swept through the draw at Roland Garros without losing a set so far.

Anisimova took command of the match against Halep early in their first meeting, generating superior depth and force from the baseline. She finished with 25 winners and 24 unforced errors and, critically, managed to win 65 percent of her second-serve points against Halep, one of the better returners in the women’s game.

This was not Halep’s finest hour (and eight minutes).

“Nerves a little bit,” said Halep, who will drop to No. 8 in the rankings on Monday. “Stressed because I felt that I’m playing well and maybe my expectations for myself were big today. Maybe I couldn’t handle the tension in my body, so I couldn’t play my best, and I couldn’t move at my best level.”

But Halep made it clear that Thursday’s surprisingly one-sided result was not all about her own failings.

Asked if Anisimova could win the French Open, Halep did not hesitate.

“I think she has a big chance if she’s playing like today without emotions and without thinking, like, about the result,” Halep said. “She was pretty calm. She showed that she’s able to do good things and big things, so I think she has a chance.”