As far as Elin Rubensson knew, the call was about plans for the coming year, nothing more. Between Christmas and New Year’s Day, she and her colleagues at Kopparbergs/Gothenburg F.C. were summoned for a remote team meeting. They dialed in expecting to hear details of the club’s ambitions for the new season.

Things, after all, were looking good. A month earlier, Kopparbergs had been crowned Sweden’s women’s soccer champion for the first time; it had been only a couple of weeks since the team had played Manchester City, the English powerhouse, in the knockout rounds of the Women’s Champions League.

Though Rubensson had not played at all in the 2020 league campaign — she opted out while expecting her first child — and had missed the celebrations of the title victory after testing positive for the coronavirus, she was excited. She had given birth to a son, Frans, just before the holidays. She was thinking about when she might start playing again.

And then “a bolt from a clear blue sky.” It was over.

On the call, the club’s executives told the players that Kopparbergs — on the back of the greatest season in its history — was being closed down, effective immediately. It would not defend its league title. It would forfeit its place in next season’s competitions. The Manchester City defeat would be its last game as a club.

“It was a shock for all of us,” Rubensson said. “We did not expect it. Our son was only a week old, and suddenly I had no club to play for. We didn’t know what was going to happen or what to do.” 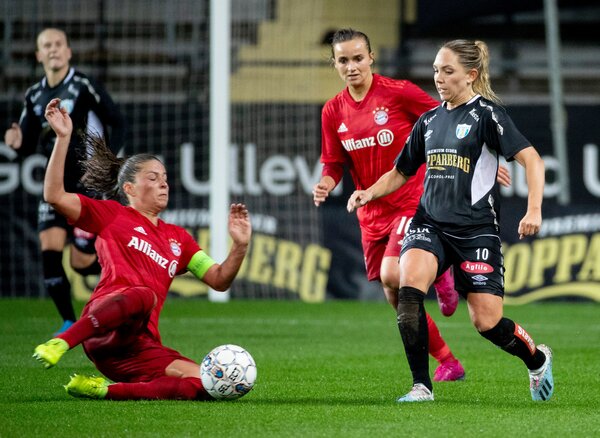 Over the last decade or so, the landscape of women’s soccer in Europe has shifted so fundamentally as to be unrecognizable. As the game’s popularity has grown, as the broadcast deals and sponsorship money have poured in and more and more fans have come through the gates, it has attracted the attention of the continent’s history-laden — and cash-soaked — men’s teams.

The Champions League has been dominated by the game’s hegemon, Olympique Lyonnais, with only the superheated rise of its national rival, Paris St.-Germain, providing any threat to Lyon’s primacy.

The lavish spending of the clubs of the Women’s Super League in England has attracted players such as Tobin Heath, Rose Lavelle, Pernille Harder and Sam Kerr, turning it into what many regard as the strongest domestic women’s competition on the planet. Barcelona, Atlético Madrid, Juventus and Bayern Munich have all dedicated a portion of their considerable resources to trying to keep pace. Manchester United fielded its first women’s team in 2018; Real Madrid bought an existing one and rebranded it in its name last year.

While that investment is welcome and overdue, it is not without cost. Across the continent, the teams that did so much to sustain and grow women’s soccer before the money arrived, the clubs that constitute so much of its history, have found it all but impossible to compete: England’s Doncaster Belles, Spain’s Rayo Vallecano, Italy’s A.S.D. Torres, even Turbine Potsdam of Germany, a two-time Champions League winner. Glasgow City, champion of Scotland for 13 years in a row, knows it can hold out for only so long now that Rangers and Celtic are showing an interest in the women’s game.

It was that same current that forced Kopparbergs’s hand. The club had moved to Gothenburg a couple of decades before — it had previously played “on a bad pitch, close to the airport” in the satellite town of Landvetter, according to its official history — at the invitation of the local authorities, hoping to give the city’s women and girls a place to play and a chance to dream.

But though it was backed by one of Sweden’s largest breweries — Kopparberg is one of the world’s largest producers of cider, and it shared a chairman, Peter Bronsman, with the soccer team — the women’s side was always a small-scale enterprise. “It was four friends doing this as a hobby, almost,” said Carl Fhager, a lawyer engaged to oversee the winding down of the club. “It was not a big organization. It did not have many members. In Swedish terms, it was a very small club.”

That did not prevent it from enjoying remarkable success. It was able to sign Hope Solo, Christen Press and Yael Averbuch, all United States internationals. Though it had to wait until 2020 for its first championship, it had won the Swedish Cup three times and was a regular participant in the Champions League.

It was those forays into Europe — those encounters with the new powers of the women’s game — that convinced Bronsman and his board that their club’s time was passing. A couple of years ago, they had opened discussions with I.F.K. Gothenburg, one of the city’s men’s teams, about folding the club into its operations.

The idea was eventually vetoed by I.F.K.’s members — Swedish clubs are member-owned nonprofits, and the idea of one’s taking over another was too alien to be tolerable — but the more it ran into the likes of Manchester City, with its squad packed with international stars and its training facilities shared with the club’s men, the more Kopparbergs felt the writing was on the wall.

“It became even clearer in the Champions League,” Fhager said. “The club knew it was not competitive anymore, and the difference in facilities was not fair on the players.” It was the same reasoning that would appear on the statement released by the club on Dec. 29, confirming its closure.

By that time, Kopparbergs had contacted Fhager, tasking him with finding a new home for the players: either by identifying a larger club to assume the team wholesale — ideally one in Gothenburg — or finding new homes for as many members of the squad as possible.

He contacted not only Gothenburg’s four men’s soccer teams, but its ice hockey clubs, too, anyone who he thought might have an interest in assuming the Kopparbergs players and the team’s place in Sweden’s top tier, the Damallsvenskan.

One was particularly responsive. Marcus Jodin, the chief executive of BK Hacken, one of Gothenburg’s biggest men’s teams, had seen the news that Kopparbergs would be shuttered, but had not thought too much of it. “We were really busy,” he said. “We were trying to close a big transfer for the men’s team.”

His phone, though, soon started pinging with messages from colleagues and friends. “They said this might be a chance for us,” he said. Hacken had a strategic plan to increase its investment in the women’s game — its women’s team was at the time playing in Sweden’s third tier — as part of an attempt to become a “fully balanced club between men’s and women’s sports.”

When Fhager called Hacken on the afternoon of Dec. 29, Jodin was ready to listen. The next day, at a meeting of Hacken’s board, team officials discussed the idea. Though taking over another team was anathema, the appeal was clear.

Part of Jodin’s argument was financial. “The economics of women’s soccer are moving really fast,” he said. “If it takes us five to seven years to make it to the top level in the normal way, then where are the economics then? Do we have the time and money to wait that long.”

But part of it was moral, too. Without Kopparbergs, Gothenburg would not have an elite women’s team. “The club was founded to give girls in the city a chance to dream,” Jodin said. “And that dream can’t move to Malmo.”

With the backing of the board, he set about not just putting the idea to the club’s members, addressing all of their “questions and fears,” but making Hacken ready if they agreed. “We wanted the players to notice a change from Day 1,” Jodin said. “They had been through a nightmare, losing their jobs and income. If we had not been ready for them, we would have failed.”

In late January, the merger went to a vote, as all decisions at all Swedish clubs must. Ninety-two percent of Hacken’s fans agreed to it: The club would take on Kopparbergs’s players, its commitments and its place in the league. The team would change its name and its jersey. All that would be left of a quarter-century of history was the nonprofit association number under which Kopparbergs was registered.

For those involved, it is a happy ending. “There were only two alternatives,” Jodin said. “Either the club closed, and the players left, or they became part of Hacken.”

Fhager said most of the fans he had spoken to were enthusiastic: “The idea of Kopparbergs was to give Gothenburg an elite team that girls can aim for. It still has that.”

For Rubensson, “everything feels great.”

“The size of the organization and the facilities are the main difference,” she added. “We’ve been very well welcomed. We feel like this will be a very good step for us, at a time when Swedish teams need to improve to be successful in Europe.”

For her, as it is for everyone else, this is the future. Kopparbergs, and the teams like it, are the past.