Melbourne Cricket Club boss Stuart Fox is hopeful that more than 25 thousand fans will be allowed into the MCG for the Boxing Day test.

Victoria recorded its 18th straight day without any more new cases of COVID-19 and no further deaths.

A 'test' crowd was allowed back into the 'G on Tuesday for the first time in months to make sure the stadium is COVID-safe before the summer. 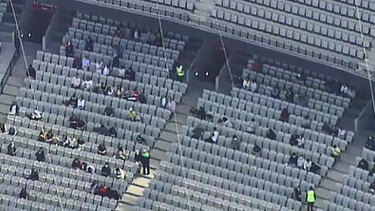 Spectators at the MCG.Credit:Nine News

"At the moment I think there's going to be further easing of restrictions if Victoria continues to progress well," Fox said on Tuesday.

"We've been given a guidelines of 25 thousand, but we're still hopeful that may change a bit. It might go to 30 thousand or it might go to 40 thousand."

Three hundred people put the stadium's plan to the test, including entering and exiting, buying food and drinks and practising social distancing.

"It's really been about practising some new systems and procedures for fans," Fox said. 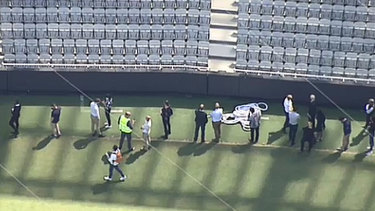 The MCG seen from above.Credit:Nine News

"We've just trialled things like ticketing, how you enter the building, how you socially distance going to food and beverage outlets, exiting the building and using the amenities.

"The seating plans are part of the COVID-safe plans, what we're looking to do is probably allocate the seats in rows and probably half the row and with every second row not available. Today was about watching how customers behave."

Fox said the MCC had been in contact with sporting organisations "around the globe" to work out the most efficient ways of welcoming a socially distancing crowd.

"Part of it is about learning from other venues, so we've been working really hard with Melbourne Olympic Park Trust, Tennis Australia, VRC, so today is a gathering of a lot of different sporting organisation and venues.

"I think we're all looking at each other and learning, we haven't had a lot to do over the last six or eight months so what we have been doing is preparing for a major event under not a normal scenario, under a different scenario."

Around 20,000 tickets will be open to the public, while a portion will still be set aside for Melbourne Cricket Club members.

"It will be a pretty hot ticket, I would've thought, this year," Fox said.

"We've got some preliminary plans in place, MCC we're looking at about 25 per cent of the capacity of the stadium, so roughly 5700 seats for MCC members. Around 20,000 for public, corporate, Cricket Australia guests.

"We are trying to be fair and reasonable for everyone."

11/17/2020 Sport Comments Off on A testing environment: MCC puts social distancing plans in play
Recent Posts
We and our partners use cookies on this site to improve our service, perform analytics, personalize advertising, measure advertising performance, and remember website preferences.Ok