For more than two weeks of the strangest season in major league history, the St. Louis Cardinals disappeared. The birds on the bat flew away for the pandemic, it seemed, and while the rest of the league carried on, the Cardinals wondered if their coronavirus outbreak would cancel their season.

“When you spend 17 days without playing, sometimes you think that way,” said Yadier Molina, the longtime St. Louis catcher. “Yeah, it was in my mind. I’m thankful that we got back to normal.”

Normal is relative these days, of course, but on Sunday the Cardinals wound up where they usually do: in the postseason for the 14th time in the 2000s. They beat the Milwaukee Brewers at Busch Stadium, 5-2, to finish at 30-28. They lost two games from their schedule because of their layoff, the longest any team endured this summer.

The Cardinals had 18 positive Covid-19 cases in their traveling party during the outbreak, which started in late July. They did not play again until Aug. 15, cramming 53 games into the last 44 days with help from 11 doubleheaders. They would have played another in Detroit on Monday if it had bearing on the playoffs.

“Fans don’t really understand what we went through; they just see the score at the end of the game, and that’s fine — we don’t expect them to understand it,” center fielder Harrison Bader said. “But we just accomplished a lot. It’s like: The last thing we’re doing is exhaling. It’s the total opposite. We want it all. We’re coming for it all.”

Even in losing, the Brewers earned a spot because of losses by the San Francisco Giants and the Philadelphia Phillies. Milwaukee will visit the top-seeded Los Angeles Dodgers in the new best-of-three first round, part of a 16-team playoff field that is the largest in league history.

Other first-round National League matchups include the Cardinals at San Diego; Cincinnati at Atlanta; and Miami at the Chicago Cubs. The American League matchups are Toronto at Tampa Bay; the Yankees at Cleveland; the White Sox at Oakland; and Houston at Minnesota.

The A.L. series start on Tuesday and the N.L. on Wednesday — when the league will hold eight playoff games in one day.

“The most remarkable thing is we actually have two days off now,” said John Mozeliak, the Cardinals’ president of baseball operations. “We haven’t had that since we were sick.”

The rest of the postseason — the usual division series, league championship series and World Series — will be held at neutral sites, with A.L. teams playing in Los Angeles and San Diego, and N.L. teams in Houston and Arlington, Tex., where the entire World Series will be played starting Oct. 20.

Officially, the format is in place for this year only. It is a direct result of the pandemic, which forced teams to hold games without fans in the stands. With no ticket revenue in the regular season, the league wanted a cash infusion and created a new round of playoffs to sell the networks.

Commissioner Rob Manfred hopes to keep the rough outline in future seasons, but with 14 teams instead of 16, subject to agreement with the players’ union. The format gives six more teams a chance at the World Series title, but also rewards mediocrity. Every winning team made the playoffs, and so did two with losing records — the Astros and the Brewers, both 29-31.

“There’s no reason to apologize for getting into the playoffs,” said Brewers Manager Craig Counsell, whose team was never over .500 all season. “We’ve got a chance to win the World Series.” 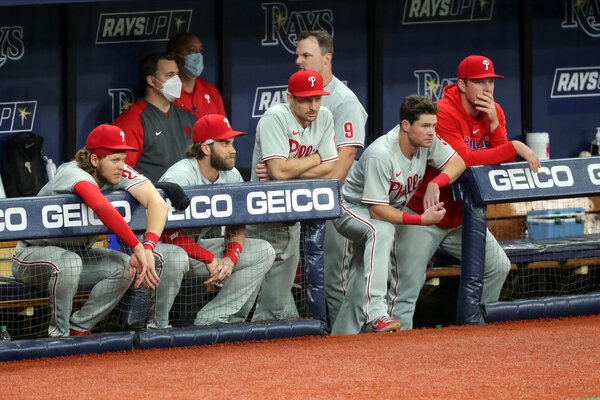 The most disappointed team on Sunday was probably the Phillies, who needed losses from the Brewers and the Giants to have a chance. They got those, but fumbled the part they controlled, falling by 5-0 to the Rays to complete a sweep.

“Came up one game short — and there were a lot of chances to win that one game, and we weren’t able to do it,” said Manager Joe Girardi, whose team may soon lose catcher J.T. Realmuto in free agency. “And it’s extremely frustrating.”

With the Padres and the Marlins in the field this year, the Phillies took over as the N.L. team with the longest active playoff drought. They have not qualified since 2011, their last season with a winning record, and this time the bullpen was largely to blame. The Phillies lost eight games in which they led by at least three runs — the Braves and the Marlins lost one such game each — and their relievers combined for a 7.00 earned run average.

“We made some changes, and we thought that was going to be big for us,” Girardi said. “It started going pretty well, and it kind of faded the last couple of weeks. Still, through all that, we had a chance. I put it on me. I didn’t get the most out of our bullpen.”

Girardi is in his first year with the Phillies and will surely be back for 2021, but the Boston Red Sox, who were 24-36, announced Sunday that they would not retain Ron Roenicke as manager. Roenicke took over for Alex Cora, who was fired for his role in the Astros’ sign-stealing scandal but whose suspension ends after the World Series.

The Los Angeles Angels also fired Billy Eppler as their general manager on Sunday after finishing 26-34 for their fifth losing record in a row. They still have not won a playoff game during Mike Trout’s dazzling career, and have one year to go on their 10-year, $240 million contract with Albert Pujols.

Pujols passed Willie Mays for fifth on the career home run list this season (he now has 662), but finished with six home runs and a career-low .224 average. His former team, the Cardinals, continues to thrive, and has now earned the right to keep going.

“I’ve been a part of amazing clubs in my career — this was my 25th year with the Cardinals — but I couldn’t be more proud of a group of people than this,” Mozeliak said. “Because this was by far the most daunting and difficult year any of us have ever been through.”

09/28/2020 Sport Comments Off on After a Halt, Then a Sprint, the Cardinals Land in the Playoffs Again
Recent Posts