The Miami Marlins arrived at their New York hotel around 5:30 a.m. on Friday, after a rain-delayed victory in Atlanta that had ended after midnight. There was no time for reflection on the poignancy of the setting for their final playoff push, even if they were inclined.

“More concerned with us getting where we want to be,” said Don Mattingly, their manager, before batting practice Friday afternoon. “Anywhere would be special, honestly, with this group — and if it happens here, it would be great, because it’s the last trip.”

“Here,” in his case, was Yankee Stadium, across East 161st Street from the site of the old ballpark where Mattingly starred as a player. The Marlins had history there, too — they won the World Series in the Bronx in 2003, and have not reached the postseason since.

On Friday against the Yankees, they had a chance to end baseball’s second-longest active playoff drought, after the Seattle Mariners, who have not made it since 2001. A Marlins victory over the Yankees and a Philadelphia Phillies loss to the Tampa Bay Rays would give Miami a guaranteed spot in the eight-team National League field.

That outcome, even considering the randomness of a 60-game schedule, would be something close to a miracle. The Marlins had 105 losses last season, 12 more than any other N.L. team. They were also the league’s worst team in 2018.

The Marlins, in fact, had no winning seasons in the last decade — and the 2020s started ominously. Major League Baseball halted their schedule after three games in July because of an outbreak of the coronavirus. The Marlins had 20 positive cases in their traveling party and spent a week marooned in their Philadelphia hotel rooms. They needed 17 new players when they were finally cleared to return.

In such an unusual season, perhaps what followed made as much sense as anything: a five-game winning streak, a cushion that has kept them from falling beyond a game below .500. When they lost by 29-9 in Atlanta on Sept. 9 — setting a N.L. record for runs allowed in a game — the Marlins recovered to win five games in a rare seven-game series with the Phillies.

“We’re resilient,” outfielder Corey Dickerson said. “We always come back after a hard loss or after being locked up in a hotel for a week straight or being without 20 of our guys. Going through all that brought us a lot closer. Being a good team, you have to depend on the guy next to you. When you play with so many different guys and you’re still able to pull these close wins out, your buy-in grows.”

Buy-in has long been a challenge for the Marlins, who won championships in 1997 and 2003 but quickly tore down both rosters to slash their payroll. Their fans have learned not to trust ownership, no matter who has been in charge, and their attendance has ranked last in the N.L. in each of the last seven years. 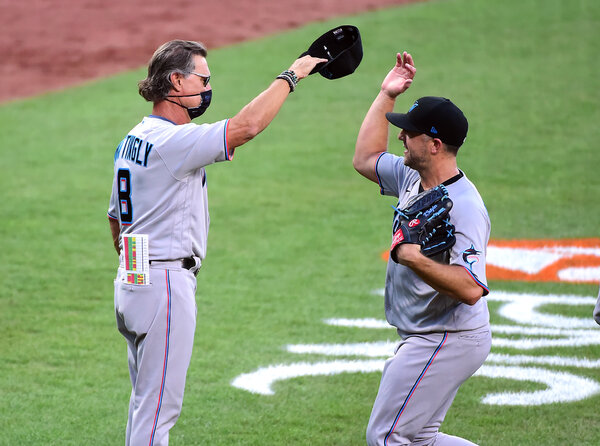 Derek Jeter, the Hall of Fame Yankees shortstop, took over as chief executive two years ago after investing in a group led by Bruce Sherman that bought the franchise for $1.2 billion. Jeter made sweeping changes but retained Mattingly, his predecessor as Yankees captain, who could be the N.L. Manager of the Year.

“If he doesn’t win that award, I will be absolutely floored,” said the Marlins television analyst Todd Hollandsworth. “I cannot imagine a manager that’s done a better job than Don Mattingly has. Every moment they’ve had the opportunity to pack it in and say, ‘We’ll be like every other Marlins team for the last 17 years,’ he just would not allow them to do it. He continues to motivate them and bring out the best in everybody.”

Hollandsworth, a reserve outfielder for the 2003 champions, said he could not think of a Marlins player who had regressed this season. Starting infielders Jon Berti, Miguel Rojas and Brian Anderson have continued to establish themselves, and the young starters Jorge Lopez, Sandy Alcantara and Sixto Sanchez had combined for 24 starts with a 3.44 E.R.A. entering Friday.

Yet the Marlins are not really a young team. They have gotten little from the prospects they acquired from trading the outfielders Giancarlo Stanton (Yankees) and Christian Yelich (Brewers). The trades of J.T. Realmuto (to Philadelphia) and Marcell Ozuna (to St. Louis) have worked better so far, but mainly the Marlins have chosen wisely among low-priced veterans in free agency.

Dickerson, first baseman Jesus Aguilar and outfielder Matt Joyce have all helped, and the rebuilt bullpen has been the biggest separator between Miami and the Phillies, whose relief corps has been one of the worst in major league history. The Marlins’ Brandon Kintzler has 11 saves in 13 chances, and three relievers acquired to fill out the roster during the team’s coronavirus outbreak — Richard Bleier, James Hoyt and Nick Vincent — have thrived.

“We really had talked about, ‘Hey, the team that can get over all the testing and the masks and protocols and no fans and all that stuff — and could get down to business on the field — is the team that’s going to have a better chance to move forward,” Mattingly said. “They were able to keep the focus, and the front office did a nice job bringing in some pieces to hold down the fort with guys that are still a part of the equation.”

At 29-28 before Friday, the Marlins have hardly been a powerhouse. But their resilience has helped them stand out in a crowded field of contenders, and made a best-of-three first-round series — with no off days — seem easy by comparison.

“We’ve played 15 games in 10 days — you’re telling me we play three and then we get a day off?” Mattingly said, laughing. “That sounds like a vacation.”

09/25/2020 Sport Comments Off on After Season of Challenges, Marlins Are on the Verge of a Breakthrough
Recent Posts
We and our partners use cookies on this site to improve our service, perform analytics, personalize advertising, measure advertising performance, and remember website preferences.Ok