PARIS — Where would American tennis be without immigrant families?

Just for a start, consider the Samprases, the Agassis and the Changs, whose sons — Pete, Andre and Michael — became Grand Slam champions. But the list is so much longer, the ripple effect so much bigger and the story, which would make a fine book, is adding a new chapter at this French Open.

Of the four American women still in contention in Paris, two of them are young and prodigious talents whose parents came to the United States from present-day Russia. Sofia Kenin and Amanda Anisimova grew up being coached primarily by their self-taught fathers in the professional tennis incubator that is South Florida. Both won their first WTA Tour titles this season, and neither should be unseeded at Grand Slam tournaments much longer.

Kenin, a scrappy 20-year-old ranked 35th, upset Serena Williams in straight sets in the third round on Roland Garros’s center court with much of the crowd against her.

Anisimova, an imposing 17-year-old ranked 51st, is into the round of 16 of a second straight major, and along the way once again eliminated Aryna Sabalenka, the No. 11 seed.

“I really believe that Kenin and Anisimova are going to be fixtures in the top 10 for a long, long time,” said Rick Macci, a veteran American coach. “Anisimova is a little different than Kenin because she’s had some quicker success because she’s bigger and stronger, but now you’re seeing Kenin maturing and coming on at age 20.”

Macci, a born raconteur, has helped develop some of tennis’s great talents in their formative years, including the Williams sisters. He began coaching Kenin when she was 5 and said he worked with her until she was 12, although her primary coach has always been her father, Alexander.

“Back then, I came right out and said Sofia was the scariest little creature I’d ever seen,” Macci said in a telephone interview from Boca Raton, Fla. “It was unique: the hand-eye coordination and her ability to take the ball immediately right after the bounce. I have a lot of kids do that, but it was almost like it was baked in already, even though she was little and the racket was actually bigger than her. The only player I’ve seen like that is Martina Hingis.”

Kenin, nicknamed Sonya, was soon on magazine covers and getting the chance to encounter some of the sport’s prominent figures at exhibitions and other events as she showed off her precocious strokes.

“I think she was more famous when she was 5,” Alexander Kenin joked in an interview after his daughter’s victory over Williams on Saturday.

There is a photograph of Kenin at age 6 hugging Anna Kournikova, the Russian star whose high-profile career ended early because of injury. But it was all quite a challenge, financially and technically, to Alexander Kenin, who had played tennis only recreationally.

“If I had known what I had to go through,” he said, shaking his head. “Thank God I didn’t in the beginning.”

Kenin said he and his wife, Svetlana, a qualified nurse in the former Soviet Union, had applied for exit visas for years before arriving in New York City in 1987 with “$286” after stops in Austria and Italy. “We lived in Brooklyn and Queens,” said Kenin, who said he initially studied computer programming during the day and drove for a car service at night.

Sofia was born on Nov. 14, 1998 in Moscow, where Alex Kenin said the family returned for her birth and for a several-month visit so they could receive support from their extended family. 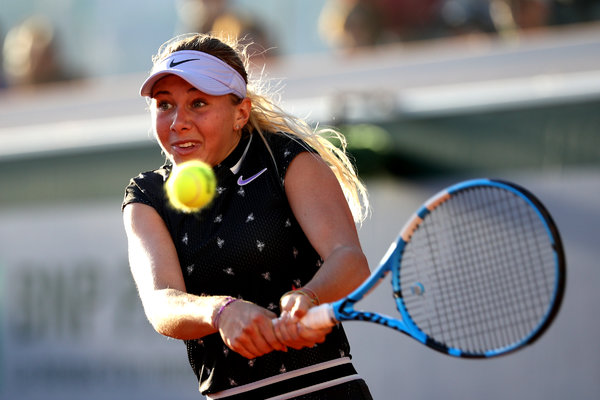 The Kenins now live in Pembroke Pines, Fla. Sofia Kenin said she had only a United States passport. She also speaks rapid-fire English, which is quite a contrast with Anisimova’s measured diction.

“My friends always make fun of me for it,” Anisimova said. “They say I have a monotone voice. I don’t like it.”

Kenin and Anisimova have one sister each. Both have pet Chihuahuas, and both have been inspired in part by Maria Sharapova, who left Russia for South Florida with her father as a young child and beat overwhelming odds and economic challenges to rise to No. 1.

Sharapova, despite her American accent, has proudly continued to represent Russia, but Kenin and Anisimova, who speak Russian with their parents, said they had not considered that option.

Anisimova’s father, Konstanin, has said that he and his wife, Olga, moved to the United States in 1998 in the hope of providing more opportunity to their older daughter Maria, who was 10. The family eventually moved to Florida, and Maria went on to play tennis collegiately at Pennsylvania.

Amanda, born in Freehold Township, N.J. on Aug. 31, 2001, would become the tennis prodigy: learning her early technique from her mother and then receiving direction from her father and elite coaches like Nick Saviano, who long worked with Sloane Stephens, now the top-ranked American singles player.

Anisimova’s family has generally taken a conservative, long-range approach to her development by limiting her physical training and tournament play. But there has been no holding back talent. At 15, she earned the United States’ reciprocal wild card into the 2017 French Open, losing in the first round. Two years later, she is into the second week at Roland Garros with her complete game and improved movement.

No longer coached by her father, she is working with Jaime Cortes, a former touring pro from Colombia, and with the fitness trainer Yutaka Nakamura, who was a key factor in helping the far-from-fleet Sharapova improve her court coverage.

“I think and hope that she will continue to develop and will be, rather than the second Sharapova, the first Amanda Anisimova,” Saviano said by telephone on Sunday. “She’s really got a very complete game. She can come forward and volley. She can drop shot, has a great return and a good serve. And Amanda, even when she was little in practice, she couldn’t wait to play points and get competitive.”

She and Kenin share that trait, although they express it differently. Kenin is fiery and highly demonstrative as she showed in her remarkable victory over Williams, who can intimidate veteran and newcomer alike thanks to her combination of power, grunts and 23 Grand Slam singles titles. Though Williams was far from her best, Kenin still had to manage her emotions, channel her ambition and hit plenty of lines with her serves and compact groundstrokes to complete the upset.

“Sonya’s not afraid to play Rafa,” said Macci, referring to the 11-time French Open men’s champion Rafael Nadal. “She’s always been like that. When she was little, she’d always play boys and get drilled, and she always acted like she never lost but just ran out of time. And then the next day, she would say, ‘Can I play them again?’ A lot of parents and kids they run and hide. Not Sonya and not her dad, and I think that came right through the television screen against Serena.”

It is difficult to disagree and also hard not to peer into the near future and see Kenin and Anisimova sharing the stage in Fed Cup matches and on Grand Slam show courts. For now, they have yet to play each other on the WTA Tour and have trained together only on rare occasions.

But both are well aware of the other’s progress, a comparison that may provide motivation in the years to come. Both are also well aware of their similar life paths, which tie them to a rich tennis legacy.

“Immigrant stories,” Kenin said, “are good stories for everyone to know.”