Clifton Duck may watch a bit of the N.F.L. draft this weekend, as he has in previous years. But he may not. “It’s everyone’s dream to go to the draft on TV,” he said. “But it’s a long, uncontrolled process, and you can’t determine what happens.”

For Duck, the dream of playing in the N.F.L. has so far eluded him. Despite his size at 5-foot-10 and 170 pounds, Duck had been named an all-conference defensive back at Appalachian State each of his three seasons. But when the team’s coach left to take over the Louisville program, taking a number of the staff with him, Duck figured he’d enter the 2019 draft.

Duck didn’t seek a lot of advice about his pro potential, essentially betting on himself to impress N.F.L. personnel. “Whatever team or camp I went to, I knew I was going to produce,” he said.

Duck, like an increasing number of underclassmen who leave college early, wasn’t drafted. He signed a free-agent contract with the Chicago Bears in May 2019 and had a solid camp, including an interception and 62-yard runback in a preseason game against the Giants. Still, he was cut.

He returned home to his parents’ house in Charlotte, N.C., and since then, Duck has been taking online classes at Appalachian State to complete his communications degree (he’s one semester short), working out, coaching at his old high school and working the night shift at CarMax. The 2020 Canadian Football League season was canceled, but he was contacted by a local scout for the Winnipeg Blue Bombers, so he is now preparing for their July training camp. If that goes well, who knows? For Duck, the N.F.L. dream still lives. 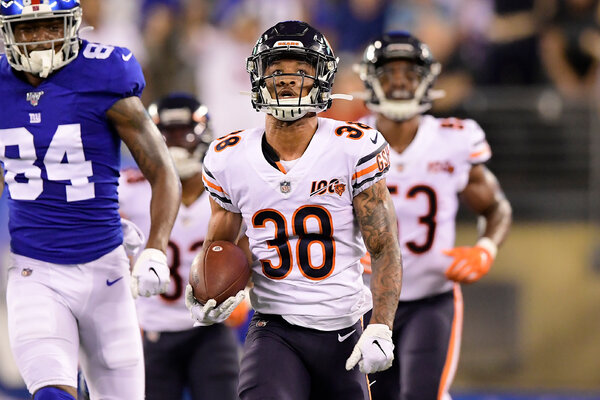 “You just go back to square one and keep putting in the work.”

In the 31 years since the N.F.L. began allowing underclassmen to declare for the draft, the number who do so every year has ballooned more than threefold, while the available jobs have not.

In 1990, 28 underclassmen declared for the draft, and some cashed in: Five were among the first 10 picks. Ten, however, were not drafted.

The number of underclassmen declaring for the N.F.L. draft has roughly doubled over the past decade. At least 20 of them have gone undrafted in all but one of the past nine years.

Note: Ninety-eight underclassmen have declared for the 2021 N.F.L. draft.

While the N.C.A.A. addressed the swell of early entrants for the N.B.A. draft with a 2018 rule change that allows players to return to college before a deadline if they haven’t signed with an agent, college football is considering no such change.

Unlike in basketball, where undrafted players can hope to catch on with the G-League or pro teams in Europe and China, or baseball, which boasts 120 minor league clubs, in football the options are slim.

“There’s no alternative. There’s no option where I can go play in Lithuania,” Alabama Coach Nick Saban told The Athletic in 2018.

There are only 53 active players per N.F.L. team. There will be 259 slots in this year’s draft, including compensatory picks, and 98 underclassmen have been added to the pool by declaring early. An N.C.A.A. study of the 2019 draft showed that just 6.8 percent of eligible Football Bowl Subdivision players were taken.

“The N.F.L. is a private entity with a business model that’s been successful,” said UConn Coach Randy Edsall, who has also worked for N.F.L. teams. “If a young man is going to come out early, he better make sure he’s done his due diligence. If you declare, then understand what the ramifications are. You have to live with that decision.”

The N.F.L. declined to comment for this article but referred to the “College Player Development” section of its website, where the mission of the league’s College Advisory Committee is outlined. “The board evaluates up to five underclassmen from each school, though evaluations for additional players are considered on a case-by-case basis,” the website said. “Limiting the number of players the committee evaluates allows the scouts to focus on those players with a realistic chance and provide more accurate projections.”

Many players don’t seek the committee’s advice, or ignore it. Axios reported that during the 2016 and 2017 drafts, 80 underclassmen who were advised by the committee to stay in school declared early anyway.

As the number of early entrants has grown, so has discussion of changes — but there’s been little sign of consensus. The N.C.A.A. did not respond to requests for comment.

Saban and the former Ohio State coach Urban Meyer, who now coaches the Jacksonville Jaguars, have discussed some of these proposals with N.F.L. representatives, but brokering a solution between two bureaucracies like the N.C.A.A. and the N.F.L. will likely be a glacial process.

One popular proposal is for the N.F.L. to adopt a system similar to the N.B.A.’s model. Underclassmen who don’t sign with an agent can attend a pre-draft combine — this year in June — and receive feedback, maintaining college eligibility if they withdraw from the N.B.A. draft by July. But in football underclassmen must declare for the N.F.L. draft in January, before the scouting combine, which is traditionally held in the spring.

Rick Neuheisel, a CBS Sports commentator and former college coach, argued that even after the draft any player who isn’t chosen should be able to return to school.

“Why do we make them walk the plank?” he asked.

But the solutions are complicated too. Colleges would have prepared in spring practice for a roster that doesn’t include the early entrants, and a new recruiting class addressing the anticipated roster gaps would have been signed in February; college roster management would be scrambled.

It’s too late for any of those proposals to be of use to James Williams. He gained 3,090 all-purpose yards in three years as a running back at Washington State, and declared following his junior year in 2018. Williams’s position coach had departed before that season, and Williams didn’t connect as well with the replacement; a freshman back began eating into Williams’s playing time. He and his girlfriend had a baby that December.

The College Advisory Committee counseled him to stay in school, telling him that he lacked the size and speed for the pros, but he figured Washington State's pass-oriented scheme and competition at his position would be obstacles.

“If I went back, how much better would I have been?” he asked. “I felt I’d just leave and take my chances.”

On the draft’s third day, when the final three rounds were being selected, there was a party for him at a Los Angeles-area restaurant.

“But as they got to the last 20 picks, I started panicking,” he said.

Williams wasn’t drafted. What followed was a free-agent contract with Kansas City and tryouts with Washington, Green Bay, Indianapolis, New England and Detroit, where he played in one exhibition game.

But he didn’t stick. So Williams signed a contract with the C.F.L.’s Blue Bombers. Meantime, he’s living with his fiancée’s parents’ in Lewiston, Idaho, training high schoolers and working as a personal trainer; he is a semester short of a degree in humanities.

“My life’s been dedicated to football for 21 years, but I don’t want to just rely on football,” Williams said. “If it doesn’t work out, that’s a message to find something else I’m passionate about.”

04/30/2021 Sport Comments Off on As Underclassmen Flood the N.F.L. Draft, Landing Places Dry Up
Recent Posts