BOSTON — When their proximity to the inconceivable can be measured in months or years instead of mere days or weeks, the members of the St. Louis Blues will reflect upon one of the most extraordinary moments of not only their lives, or the team’s 52 years in the N.H.L., but also the two and a half centuries since a pair of fur traders settled the city along the western banks of the Mississippi River.

Yet even with proper detachment, they still might wonder whether this all wasn’t some icy mirage: Did the Blues, after ranking last in the 31-team league in early January, actually win the Stanley Cup?

Never before Wednesday night could that sentence be written, and so again: The Blues won the Stanley Cup.

After failing to clinch at home on Sunday, the Blues blasted the Boston Bruins, 4-1, in Game 7 at TD Garden, muzzling a crowd raring to see yet another coronation in a city spoiled by championships.

On the same stretch of Causeway Street where their last appearance in the Cup finals cratered 49 years ago, the Blues — who had missed the playoffs only nine times since the team’s inaugural 1967-68 season but had never savored their ecstatic conclusion — completed the most improbable in-season turnabout in N.H.L. history.

To punctuate it, the Blues won a third straight game in Boston. Now 6-0 on the road after a loss this postseason, the Blues dazed the Bruins with two goals late in the first period by Ryan O’Reilly and the captain Alex Pietrangelo, and two more in the third, by Brayden Schenn and Zach Sanford. 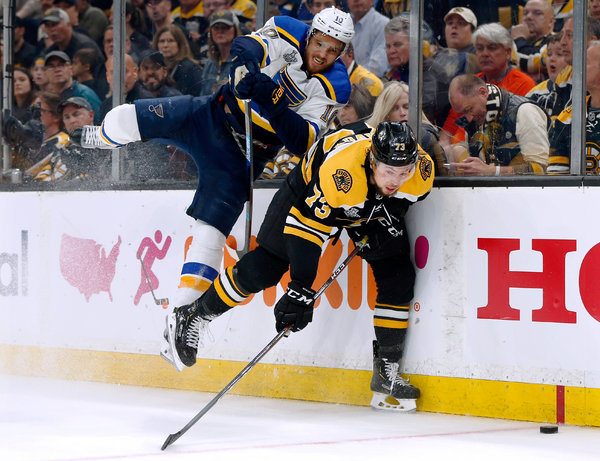 All the while, the rookie goalie Jordan Binnington unleashed his full fury on the Bruins. He capped a season that began with him ranked fourth among the organization’s goalies and ended with his stopping 32 of 33 shots, holding on to a shutout until Matt Grzelcyk scored with 2 minutes 10 seconds remaining.

Had anyone outside the Blues’ locker room scanned the standings on Jan. 3 — four days before Binnington made his first N.H.L. start — and predicted that the team would be hoisting the Cup five months later, that person would have been greeted with uproarious laughter.

No team before these Blues had gone from last place in the N.H.L. after its 20th game to winning the Cup in the same season, and St. Louis — after 37 games, or 45 percent of its regular-season schedule — was the worst of the worst. But the Blues cultivated a resilience that propelled them to an 11-game winning streak, to the most points in the league after Jan. 1 and through four grueling playoff series, each tied after four games. In the games that followed, the Blues went 8-2, winning by a combined score of 30-16.

With 25 seconds remaining in Game 7, the Blues started jumping on their bench, and when the final second ticked off, they leapt over the boards, flung their sticks and gloves in the air and mobbed their goalie.

Binnington had rebounded from a porous Game 6 to set the record for most victories (16) by a rookie goalie in a single postseason. One of the goalies he surpassed was Ron Hextall, who played in Philadelphia with Craig Berube, the Blues’ replacement coach after Mike Yeo was fired on Nov. 19.

Seven teams changed coaches during the season, but of those only St. Louis reached the playoffs. Not long after taking over, Berube removed the standings board in the Blues’ dressing room. Too negative. More lasting changes needed incubation. He wanted opponents to hate playing against the Blues.

“Grinding teams down — that’s kind of how we’re built,” Berube said Sunday morning. “We really grasped playing that way and became really good at it.”

So good at it that in a league trending smaller, faster, shiftier, that style became the Blues’ pathway to glory — or rather, “Gloria,” the 1982 hit that became the team’s singalong victory anthem. The Blues deploy an unremitting forecheck that vaporizes bodies and spirits, slamming players into boards and out of games. It helped them oust Winnipeg, Dallas, San Jose and, finally, Boston, the team that swept the Blues in the 1970 finals.

These Bruins were big and heavy, but the Blues were bigger and heavier, and meaner, too. Their nastiness — two players missed games this series because of suspensions — smothered Boston’s top two lines for the first five games, limiting those six players to two total points at even strength, one an empty-net goal in Game 1. The Bruins doubled that total in Game 6, but the Blues stifled them — David Krejci’s lonely assist on Wednesday notwithstanding — in the final game of the year.

The Greater Boston area must now summon the fortitude to face its failure to hold three major titles at once. Oh, well, the World Series and the Super Bowl will have to do.

Let us consider instead the franchise that waited more than five decades for its coronation.

In each of the Blues’ first three seasons, after expansion placed six new teams in the same division, the team made the finals. The Blues went 0-12.

The one time they finished with the league’s best record, in 1999-2000, they lost in the first round. They endured Erik Johnson’s golf cart mishap, Grant Fuhr’s collision with Nick Kypreos, Steve Yzerman’s double-overtime winner and, most devastating of all, the motorcycle crash that took Bob Gassoff’s life.

So many revered players never got to parade down Market Street: Barclay and Bobby Plager, Gassoff and Bernie Federko, Al MacInnis and Brett Hull, who is honored outside Enterprise Center with a street and a statue named after him.

So many legendary coaches, too. Scotty Bowman and Al Arbour, Joel Quenneville and Jacques Demers — they tried liberating the Blues before thriving elsewhere.

To do what all of them could not, it took a team with an interim coach and a rookie goalie who scoffs when asked if he looks nervous. It took Vladimir Tarasenko’s sniping and Colton Parayko’s stifling and O’Reilly’s scoring.

No N.H.L. team has waited longer for its first title than the Blues, who now have incontrovertible evidence that this all really did happen: a 34½-pound silver chalice, soon to be etched with their names, preserved for ever and ever.