By the skin of their teeth, the Giants (4-7) share the top spot in the N.F.C. East, riding a three-game winning streak that they hope to extend in a plea for a postseason berth.

To get there, they just need to be the best of the worst. It’s not going to be easy.

They are side-by-side with the Washington Football Team (4-7), with the Philadelphia Eagles and Dallas Cowboys on their heels each with three wins, in what might be a divisional sprint to six victories. The N.F.C. East’s teams have a tough slate of games left against N.F.C. West challengers, and it is entirely possible that the division’s winner could make the postseason with fewer than seven wins, the first time that’s happened in a 16-game N.F.L. regular season (the 2010 Seahawks and the 2014 Carolina Panthers each won their divisions with seven wins).

Giants Coach Joe Judge had been confident that the team was rounding into form entering Sunday’s 19-17 win over the Cincinnati Bengals, rebounding from a rocky start in which they had lost their first five games.

“This is really the starting point for the division,” Judge said in a call with reporters last week. “The only thing that matters is what we do from this point forward.”

That optimism was tempered when starting quarterback Daniel Jones went down in the third quarter of Sunday’s game with a hamstring injury that could potentially keep him out for the Giants’ upcoming game against Seattle.

“There are more question marks than answers right now,” Judge said of Jones’s status in a call with reporters Monday. “We’ve got to wait to see how he responds in a couple days.” 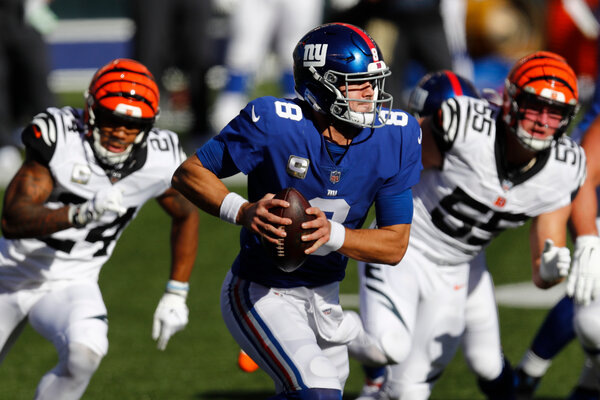 Jones had a magnetic resonance imaging test that indicated a strain, however Judge declined to comment on how long Jones could be out, saying that two factors would determine whether Jones returns this weekend: If playing would make the injury worse and if Jones is able to defend himself on the field.

“This is a tough guy and a very competitive guy,” Judge said. “If we asked him today I’m sure he’d put duct tape on it and try to go at it.”

Jones was relieved in Sunday’s game by Colt McCoy, a likely replacement under center. But Judge said he’s considering several options — from bringing in a free agent to preparing another player on the roster to take over as an emergency quarterback — all of which are harder now that the team has to conduct virtual meetings Monday and Tuesday to comply with more stringent N.F.L. guidelines amid the coronavirus pandemic.

The potential quarterback change comes just as the Giants seemed to have pieced an offense together by emphasizing ball safety. The Giants had lost running back Saquon Barkley to a season-ending injury in their second game of the season, but Wayne Gallman has rushed for a touchdown in five consecutive games, becoming a reliable red zone option for a team that has struggled to identify reliable targets. The Giants have rushed for more than 100 yards in each of their past six games.

Jones, too, had seemed to learn from his past turnover woes, going without an interception in the Giants’ three wins and not fumbling in their last two. The Giants accumulated 386 yards of total offense against the Bengals, their highest total of the year and a positive sign for a team that had ranked 30th in the N.F.L. in yardage per game entering Sunday.

It was also a mark of progress for an offensive line that has struggled since Eli Manning was still the franchise’s starter and that is now under new tutelage, since Judge fired Marc Colombo on Nov. 18 amid a reported practice dispute. Dave DeGuglielmo, the new offensive line coach, held the same position with New England Patriots in 2014 and 2015, when Judge was also an assistant there and had been brought to the Giants as a consultant.

“Anybody who’s watched us play has seen the progression with those guys up front blocking much better in the running game, the protection has improved as the year has gone on, and we’ve played better as an offense as a result,” Jason Garrett, the offensive coordinator, said on Friday.

The successful pivot also points to Judge’s hold on the Giants’ helm. In his first year as an N.F.L. head coach, he has made a name for himself as enthusiastic, quirky and quick-witted; someone who is not afraid to pull a viral stunt to keep his team engaged, as he drew clicks for when he was videotaped sliding in the mud for a fumble recovery drill. He also drew laughs by making members of his coaching staff run laps in training camp.

That Joe Judge juice seems to go a long way for the Giants, who have not had a postseason appearance since 2016. In the face of a slow start, narrow wins and losses and coronavirus cases, he has kept Giants players positive by never giving a negative quote to the press, cracking jokes and making sure all players keep their cameras on during the team’s videoconference calls.

“We’re a Joe Judge team,” defensive back Logan Ryan said in a call with reporters Friday. “We’re going to keep working every day, he’s not going to let your head get too big.”

12/01/2020 Sport Comments Off on Can the Giants’ Tenuous Grasp of the N.F.C. East Hold?
Recent Posts
We and our partners use cookies on this site to improve our service, perform analytics, personalize advertising, measure advertising performance, and remember website preferences.Ok