Las Vegas Raiders defensive lineman Carl Nassib walked outside his home in West Chester, Pa., looked directly into his phone and did something that he said he hoped would one day no longer be necessary.

In a few brief sentences, the 28-year-old Nassib came out as gay. The video clip he recorded and then posted to his Instagram account made him the first active N.F.L. player to do so.

“I’ve been meaning to do this for a while now,” Nassib said. “But I finally feel comfortable enough to get it off my chest.”

In the one-minute video and a statement that accompanied it, Nassib said he had agonized over the moment for 15 years, and that he had been meaning to make his announcement for a while. Conversations with friends and family made it possible, he said, for him to publicly say that he is gay.

The Raiders defensive lineman came out in a video posted on social media and said he would donate $100,000 to the Trevor Project, a nonprofit dedicated to suicide prevention efforts for L.G.B.T.Q. youth.

What’s up, people. I’m Carl Nassib. I’m at my house here in West Chester, Pa. I just want to take a quick moment to say that I’m gay. I’ve been meaning to do this for a while now, but I finally feel comfortable enough to get it off my chest. I really have the best life. I’ve got the best family, friends and job a guy could ask for. I’m a pretty private person, so I hope you guys know that I’m really not doing this for attention. I just think that representation and visibility are so important. I actually hope that one day videos like this and the whole coming out process are just not necessary. But until then, you know, I’m going to do my best and do my part to cultivate a culture that’s accepting, that’s compassionate. And I’m going to start by donating $100,000 to the Trevor Project. They’re an incredible organization. They’re the No. 1 suicide prevention service for L.G.B.T.Q. youth in America, and they’re truly doing incredible things. And I’m very excited to be a part of it to help in any way that I can. And I’m really pumped to see what the future holds.

“I actually hope that like one day videos like this and the whole coming-out process are just not necessary,” Nassib said, “but until then I’m going to do my best and my part to cultivate a culture that’s accepting, that’s compassionate.”

Nassib added that he was donating $100,000 to a nonprofit suicide prevention organization that focuses on L.G.B.T.Q. people under 25 years old.

Who Is Carl Nassib?

Nassib, a 6-foot-7, 275-pound end, was drafted by the Cleveland Browns in the third round of the 2016 draft. He played in 14 games during his rookie season, and established himself as a starter in 2017. 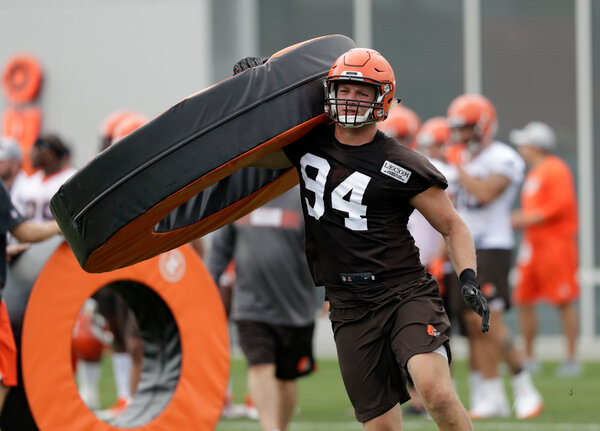 When the Browns released Nassib near the end of training camp in 2018, the Tampa Bay Buccaneers claimed him on waivers. He started 17 games in two years in Tampa Bay, totaling 63 tackles, 20 tackles for loss and 12½ sacks.

In March 2020, he signed a three-year, $25 million deal with the Raiders. He is coming off a season in which he had 27 total tackles and his first career interception, a play on which he wasn’t taken down until he had returned the ball 23 yards.

His older brother, Ryan, played quarterback at Syracuse and was drafted in 2013 by the Giants. Ryan spent two seasons as a backup quarterback in New York, then had brief and unremarkable stints with the Saints and the Jaguars before Jacksonville released him in 2017.

Nassib was a walk-on at Penn State who did not play at all at first, then only sparingly. He didn’t really break out on the field, in fact, until his senior season in 2015, when he led the nation with 15½ sacks.

A unanimous all-American and the Big Ten defensive player of the year that season, Nassib won the Lombardi Award (given to college football’s best lineman or linebacker) and the Ted Hendricks Award (as the country’s best defensive end).

His college coach, James Franklin, was among the first to release a statement of support for Nassib on Monday.

“I was proud of Carl when he led the nation in sacks,” Franklin said, “but I’m even more proud of him now.”

Some people may remember Nassib from an episode of the HBO football reality show “Hard Knocks.”

In the clip, Nassib uses a whiteboard and some quick math to teach other members of the Browns’ defensive line about compound interest and financial literacy.

Support From the N.F.L.

In his Instagram post, Nassib thanked the N.F.L., his coaches and his peers in the league for their respect and acceptance, and acknowledged that many gay people before him did not receive that same support.

“I stand on the shoulders of giants, incredible people who paved the way for me to have this opportunity,” Nassib said. “I do not know all the history behind our courageous L.G.B.T.Q. community, but I am eager to learn and to help continue the fight for equality and acceptance.”

“Very proud of Carl Nassib! Incredibly happy for him and can’t wait to watch him play this upcoming season!” wrote the former N.B.A. player Jason Collins, who became the first openly gay male athlete in 2013.

N.F.L. Commissioner Roger Goodell expressed the league’s support for Nassib in a statement.

“The N.F.L. family is proud of Carl for courageously sharing his truth today,” Goodell wrote. “Representation matters. We share his hope that someday soon statements like his will no longer be newsworthy as we march toward full equality for the LGBTQ+ community.”

Nassib also received public support from the Raiders, Penn State and current and past athletes.