Brad Marchand has been called many things in response to his nagging, often-aggressive style of play on the ice — pest, annoyance, agitator.

Now, the Boston Bruins left winger, who’s scored eight goals during the Stanley Cup Playoffs along with delivering a fair amount of hits — some fair, some not — can add one more descriptor to a growing list: Draymond Green.

Charles Barkley, NBA Hall of Famer, TNT analyst and NHL fan, first made the comparison in an interview with Sportsnet in Canada and elaborated Tuesday during a teleconference for the American Century Championship celebrity golf tournament, played at Nevada's Edgewood Tahoe Golf Course on July 12-14.

MOUNT RUSHMORE: Who's the all-time greats for Bruins and Blues? 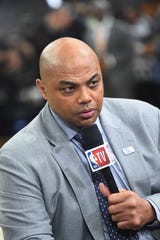 Marchand is putting together the most prolific year of his 10-season career. The 5-foot-9 winger notched 36 goals and 100 points during the regular season, helping Boston reach the Stanley Cup Final for the first time since 2013. Their series with the St. Louis Blues is tied 2-2.

But Marchand also carries a certain reputation. This season, he compiled 96 penalty minutes in 79 regular-season games.

In the playoffs last year, Marchand licked two players and was warned by the NHL that he’d be disciplined if he licked a third.

Marchand also punched defenseman Scott Harrington in the back of the helmet while Harrington was on his April 30 during their playoff series with the Colombus Blue Jackets. Mrachand also stepped on an opponent's stick, breaking it, before a faceooff.

Green, like Marchand, has a knack of playing physically. Plus, Barkley decreed in 2018 he’d like to punch Green in the face, too.

During the interview with Sportsnet, Barkley said, “That little Marchand dude, man, he makes me want to punch him in the face sometimes.”

Later in the video, Marchand said he felt Barkley just “wants to be my friend,” and said he might reach out to the former 11-time NBA All-Star.

Brad Marchand on Charles Barkley: "I think he just wants to be my friend" pic.twitter.com/8dIdxyJ88u

He might get his wish. On Tuesday, Barkley said “it would be an honor” to meet Marchand after the series ends.

Barkley will be glued to the action.

“People know how much hockey I watch,” Barkley said. “I had a couple nice parties up in Toronto — well, Game 3 really sucked, it was over after the first period — and I had a nice get-together with my friends last night, and that was a heck of a game. People know what I feel about hockey.”

Barkley is scheduled to play in the American Century Championship along with Tony Romo, Aaron Rodgers, Larry Fitzgerald and many other athletes and celebs from the entertainment world.

06/05/2019 Sport Comments Off on Charles Barkley doubles down on Marchand-Draymond Green comparison: You want to punch them in face
Recent Posts