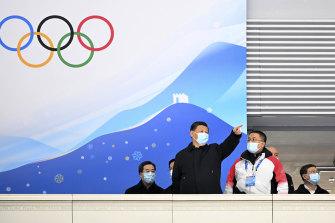 Chinese President Xi Jinping at the National Speed Skating Oval in Beijing a month before the start of the Winter Olympics.Credit:AP

The International Olympics Committee also promised officials worldwide on Wednesday the Winter Games will go ahead as planned, a day after Switzerland’s team leader asked for talks about possibly postponing the event because of the pandemic.

Swiss team leader Ralph Stockli raised concerns about going ahead with the Beijing Olympics, amid a rising number of athletes being infected by COVID-19, when speaking on Tuesday on Swiss television.

“We must really discuss the possibility of a postponement of the Games,” Stockli told French-language state broadcaster RTS. “If we don’t have the best athletes there, that’s going to be very, very difficult.”

After listening to the IOC on Wednesday, the Swiss Olympic team said it was “happy to now have some certainty on this subject”.

During his tour of Games venues, Xi told event organisers the Olympics would be considered a success if they were “green, safe and simple”, according to a video posted online by China Central Television.

The 68-year-old and everyone else in photographs of his visit wore face masks, an unusual move for the Chinese leader who often appears in public without one – a sign of heightened caution as the country grapples with its most serious outbreak since the pandemic started. One video showed Xi without a mask when addressing a crowd at a distance.

China has pledged to host a “simple, safe and splendid” games from February 4-20, in contrast to the spectacle of the Beijing Summer Olympics in 2008. The attempt to lower expectations is largely due to China’s inability to eliminate COVID-19 from its borders despite strict quarantine rules for inbound travellers, and a policy of mass tracing, testing and lockdowns to stem flare-ups.

Xi’an, a central city of 13 million people, is dealing with shortages of food and medical care as its lockdown nears two weeks. The health code system that strictly governs people’s movements has crashed, prompting the suspension of Liu Jun, head of the local big-data bureau, according to a local Communist Party body.

Yuzhou, with a population of about 1.2 million in the central province of Henan, went into lockdown on Monday, the Global Times reported. Zhengzhou, the capital of Henan, said it shut off some neighbourhoods on Tuesday.

At a press briefing in Beijing on Wednesday, Han Zirong, secretary general of the Games’ organising committee, declared that China is ready to host the event.

“After more than six years of meticulous preparation, the Beijing Winter Olympics are ready,” she said.

The Winter games are also the target of a diplomatic boycott led by the US. Australia, Canada and the UK announced similar measures, and Japan said it won’t send any government representatives, though it avoided the words “diplomatic boycott”. Beijing has vociferously denied the genocide accusation levelled at its handling of the far western region of Xinjiang, which has a large Muslim Uighur population. China insists it is providing job training and educational opportunities while quelling terrorism.