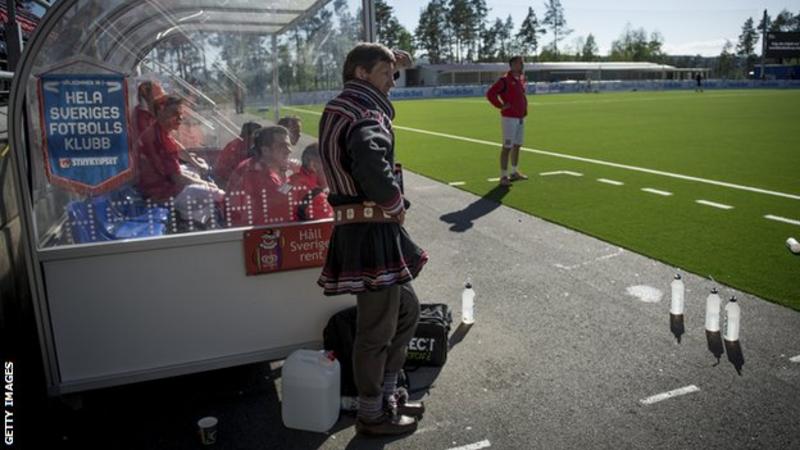 However in June their attention will switch to football as Sapmi, the north European region they inhabit – often referred to as Lapland – returns to the closest they can get to the international stage for the first time in three years.

Sapmi, which stretches over parts of Norway, Sweden, Finland and Russia, are one of 11 teams competing in the Conifa (Confederation of Independent Football Associations) Men’s European Football Cup.

It is the equivalent of the European Championship for teams that do not meet the criteria for fully fledged Fifa international status.

It is a welcome restoration for one of Conifa’s founding members, who won the inaugural Viva World Cup in 2006 and hosted the 2014 tournament following its renaming to the World Football Cup.

And while football is not yet Sapmi’s most popular activity, the Sami are rapidly rallying around their side.

“Ice hockey is probably the most popular sport but the football is uniting,” explains centre-half Jarkko Lahdenmaki.

“I think the team represents the northern people and their way of living… sometimes before games we listen to Sapmi music (joik) to relax.”

Joik is a traditional form of song often used as a form of expression to reflect a person, animal or place. It is a symbol of the culture that has been incorporated into the Sami way of living, much like the ethereal summertime midnight sun.

“The good side of the midnight sun is that you can train or play anytime but you have to have darkening curtains in the room where you sleep,” says Lahdenmaki. “Otherwise you will sleep very badly and that affects your recovery.”

For the defender, who has spent much of his career at Finnish top-tier side Rovaniemen Palloseura (RoPS), this tournament will not be his first taste of the limelight.

Previous European experience includes scoring in the Europa League for RoPS against Shamrock Rovers in 2016, as well as turning out for the festively named FC Santa Claus.

“A lot of people talk about this club, which is a bit weird for me,” continues Lahdenmaki. “But my motivation for playing in Sapmi is high. My first games in the World Football Cup in 2016 were great with high-level support – we have a great team and I know we can win.”

Conifa encompasses teams from all over the world who wish to represent their own people, spread as far and wide as Kiribati in Micronesia to Yorkshire and Cornwall in the UK.

“Everybody works as a volunteer, and nobody receives an income or salary,” says Sophie Royle, press officer for the organisation, which was founded in 2013.

“This includes the executive committee. We believe in full financial transparency and this is why our annual statements are published on our website.”

This summer’s European tournament in the Republic of Artsakh, which is internationally recognised as part of Azerbaijan, is looking to build on the success of the Men’s World Football Cup held in June last year when, at the Queen Elizabeth II Stadium in Enfield, north London, supporters witnessed a historic victory for Karpatalya in the final.

The Hungarian minority from south-western Ukraine triumphed in a competition featuring 16 international teams competing across 10 stadiums and representing over 300 million people.

The final itself was hosted by a Somali diaspora, refereed by former Premier League official Mark Clattenburg and all to the soundtrack of an official anthem by Right Said Fred.

You may have missed it though – this was Enfield not Anfield after all. 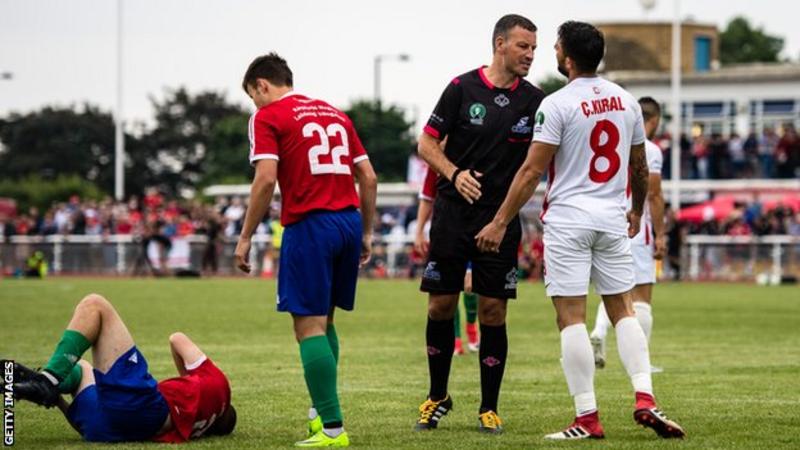 Everyone wants to be ‘the one who defeated Padania’

While Sapmi are making their return, one team are preparing to continue their proud record of competing in every European or World Football Cup organized by Conifa.

Padania, from northern Italy, came third in the 2018 World Football Cup, having won the Viva World Cup three years running from 2008 to 2010. They are also the reigning European Football Cup Champions.

“We aim at the cup, obviously, but our first goal is to reach the semi-finals,” says Padania manager Marco Gotta. “From then on, it’s a question of luck and not just strength.

“Every single team is getting stronger year after year and every single match will be a battle because everyone wants to be ‘the one who defeated Padania’.”

Padania begin the tournament as favourites but are currently ranked only fourth by Conifa.

The number one ranked team in the world are Occitania, a historical region covering mainly the south of France who have found their participation in recent tournaments limited by financial constraints.

A bona fide involvement with Conifa up until 2016 allows Occitania to currently maintain their elevated position.

“It is difficult to find people able to invest time without any payment in return,” explains Boris Massaré, Occitania’s most capped player.

“Due to financial reasons we have missed a lot of opportunities to play or attend events, which is a shame because we would have liked to go.”

Lack of finance is a common challenge for Conifa volunteers, but the esprit de corps of teams like Occitania, Padania and Sápmi remains a constant.

Real camaraderie exists within all the participating associations, many of whom have endured a troubled past. The Sami are no exception.

Rovaniemi, the capital of Finnish Lapland and a short sleigh ride away from the Arctic Circle, was almost completely destroyed during World War Two.

The Nazi German army was stationed there as part of Operation Barbarossa, which began in 1941 but due to a separate peace agreement made with the Soviet Union, a demand was made to expel the German army from the area in 1944.

This resulted in the Lapland War between Finland and Nazi Germany and left 90% of Rovaniemi burned to the ground.

Border restrictions, separated communities and the prohibition of the language in schools are just some of the notable obstacles the Sami have fought to overcome.

However, modern times have seen something of a renaissance on and off the pitch.

Last year saw the Sapmi team triumph in the first Conifa women’s international match – a 4-0 victory over Northern Cyprus – and plans are afoot for FA Sapmi to arrange the first Conifa Women’s World Football Cup in Norway later this year.

At its annual meeting in Krakow earlier this year, Conifa reaffirmed its commitment to gender equality as a new policy was announced, emphasising distribution of equal resources equally between men’s and women’s football and supporting equal representation with Football Association roles.

So as kick-off approaches the objectives are clear. Inclusion and representation is key for every association under the Conifa umbrella and for Hakan Kuorak, president of FA Sapmi, this is essentially what the tournament is all about.

“FA Sapmi have been a member of Conifa since 2013, the Sami people are the most recognised in the Conifa World and we see many things that are the same in Sapmi,” he said.

“It’s only a positive thing – all the Conifa members want to play football and be proud to represent their own people.”