Hansi Flick did not see the parallel. This spring, like millions of others, he found himself absorbed by “The Last Dance,” the story of how, seven years after its first triumph, that great generation of the Chicago Bulls — Jordan, Pippen and a fluid supporting cast — found the drive, hunger and inspiration to conquer the world one last time.

The lesson Flick drew from the series was that there is something integral to the nature of exceptional athletes, something that separates them not only from the ordinary but from the merely great. The mark of real champions, true champions, said Flick, the Bayern Munich manager, is that they never let up. “They continue, from one year to the next,” he said.

This summer, though his perspective was different, Flick experienced a story with the same moral at its heart. Seven years after Bayern completed the club’s first treble — Bundesliga title, German cup, Champions League trophy — it repeated the trick.

From the outside, the victories offered a neat narrative conclusion: a closing of the circle. Just as they had in 2013, Manuel Neuer, Jérôme Boateng and Thomas Müller all played central roles. But now Neuer is 34. Boateng is 32. Müller turned 31 in September.

They are the threads that tie Flick’s team back to the one that won under Jupp Heynckes. They have won eight straight league titles. They have worked with Heynckes, twice, and Pep Guardiola and Carlo Ancelotti and Niko Kovac. They have, as Flick said, helped to redefine what counts as success at Bayern, a club where “winning the double is now almost a duty.” But the clock is ticking on them all. 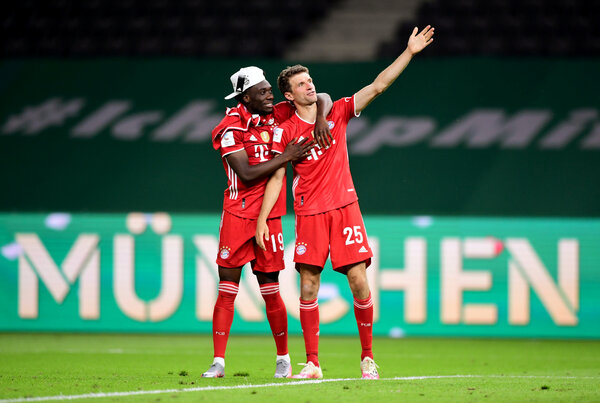 That is not how Flick sees it. He has known Neuer, Boateng and Müller for more than a decade, dating to the years he spent as assistant manager for Germany’s national team. He has no doubt at all that they all “have very much left to give.”

“This is not a last dance for them,” he said.

His faith is rooted not just in his belief that the players themselves want to make what they achieved last season a beginning, rather than an end, but in the fact that Bayern has managed to learn the other lesson that “The Last Dance” might offer: the one that is not about the triumph of a team, but the failure of a club.

Success, in sports, can be a soporific. A glorious today has a tendency to make tomorrow seem too distant, too theoretical to worry about. In the narcotic haze, it can seem as if the present will last forever.

The Bulls provide a perfect case study. Jordan and Pippen were the sorts of players who bent destiny to their will. They had ultimate agency, and so the Bulls had agency. They were the protagonists in the story: It was a story about whether they would win or they would lose.

It never seemed to occur to anyone inside the Bulls to think about what might happen when they left, and that agency disappeared. In the seasons that followed, the team became one of the worst in the N.B.A. It was six years before it so much as made the playoffs again.

For a while, it seemed as if a similar fate might await Bayern, maybe not in Germany, where the team’s primacy is so hard-baked that it can spend most of a season in a state of crisis and still win a championship, but certainly in Europe.

As recently as the summer of 2019, the club’s former player Dietmar Hamann was among those calling for a rebuild. The club needed “five or six” players, he wrote, to compete with the continent’s best. The core of the team — a group that included Javi Martínez and Robert Lewandowski, both also entering their 30s — was too old, many felt, and its style of play too ponderous to compete with the dynamism of Jürgen Klopp’s Liverpool and the verve of Pep Guardiola’s Manchester City.

Looking back, it would be easy to say all of that worry was misplaced, that rumors of Bayern’s demise had been greatly exaggerated. It would, though, be wrong. It is not that Bayern did not need to rebuild; it is that the process had already started.

In 2017, Bayern opened its new academy amid a blizzard of promises to unearth a generation of players that would turn Bayern, and Germany, into champions in 2030. The club had been conscious of a need to produce more homegrown talent; at that stage, the well had run a little dry after Müller.

Over the next couple of years, its ethos in the transfer market would change, too, developing into what Hasan Salihamidzic, the sporting director, refers to as a “two pillar” approach: As well as looking for ready-made, plug-and-play stars — like Leroy Sané, signed this summer from Manchester City — Bayern would scour the globe for promising young talent, too.

The club had been stung, just a little, by Jadon Sancho’s decision to sign for Borussia Dortmund, convinced that the road to the first team there was shorter, quicker, more certain. Bayern set out to demonstrate it could offer an effective proving ground, too.

And so over the last couple of years, it has tempted Alphonso Davies from Vancouver and Chris Richards from Dallas, and coaxed Jamal Musiala from Chelsea, Alexander Nubel from Schalke and Tanguy Nianzou from Paris St.-Germain.

The effect is clear. Bayern’s core may boast some reassuringly familiar names, but its squad is dotted with youth: Richards is 20, Davies is 19, Musiala is still only 17. Regulars like Leon Goretzka, Serge Gnabry, Joshua Kimmich and Benjamin Pavard are all 25 or younger. This is a club thinking about starting a dynasty, not commemorating one.

The challenge, of course, is to run those two things at the same time: to ensure that the young players can be blended into the team at the same time as it keeps winning. And it is here that Flick — initially appointed as a stopgap solution after the dismissal of Kovac last fall, but now a German and European champion — comes in.

That Flick did not expect to be in this position goes without saying.

His skill set, though, seems to match perfectly to the task in hand. Flick’s strength has always been his personal touch: Those who have worked alongside him say he has an ability to say the right thing whatever the situation. He is, by his own admission, a listener. “I always feel I have something to learn,” he said. “And to do that I listen.”

That does not just apply to his stars. Flick is adamant that those players not currently in the team require just as much attention, just as much care. He said that he has tried to create an atmosphere in which players are empowered to speak up during meetings, and where academy products feel confident enough to come to his office.

“We have to integrate our young players,” he said. “Your job as a coach is to develop the players. If they have a question, you had better have an answer.”

It is an approach that seems innate, but was likely refined in his days working for the national team, when part of his role was to visit clubs and coaches across Europe, to watch them at work, to piece together what made them excel.

He recalled Arsène Wenger’s stopping training to make sure his players bought into his ideas. He was impressed by the bond José Mourinho was able to fashion with his squad. “Winning is communal,” Flick said.

His players appreciate it. Boateng, who had been expected to depart Bayern in the near future, has instead been floating the idea of extending his contract. He is having fun again, he has said. Davies has praised the amount of time Flick makes available to help younger players.

Oliver Kahn, scheduled to start as Bayern’s chief executive in January, has been impressed by how the team seems to have improved since it won the Champions League. Bayern has not rested on its laurels; it has managed to savor today while thinking about tomorrow. Lisbon does not feel like an end; it looks an awful lot like the start.

Flick, the man who has helped to engineer it, is fond of an aphorism: more than once, he picks out a particularly useful German phrase to sum up his beliefs. One stands out, one that he keeps coming back to, one that encapsulates what has brought Bayern back to the summit of European soccer, and may well keep the club there for some time.

“We have a saying in German: Success is not ownership,” he said. “It is something rented. And that rent is due every day.”

10/20/2020 Sport Comments Off on Did Bayern Complete Its Rebuild While No One Noticed?
Recent Posts