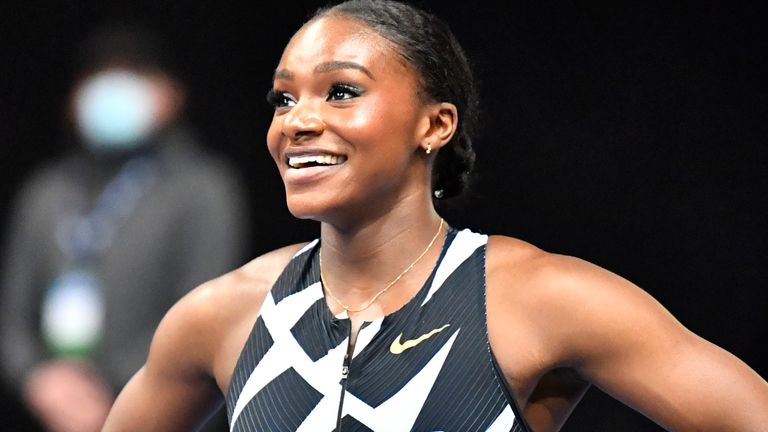 Dina Asher-Smith booked her place at the Tokyo Olympics with victory in the women’s 100 metres at the FBK Games in Hengelo.

The 25-year-old, a silver medallist at the 2019 World Championships, clocked an impressive time of 10.92 seconds in Holland, well inside the Olympic qualification time of 11.15.

There was a slight tailwind, but Asher-Smith looked to have plenty left in the tank, finishing ahead of rivals Dafne Schippers and Blessing Okagbare and setting a new meeting record.

She will be joined on Team GB in Japan by Daryll Neita, who finished third with an outdoor personal best of 11.09.

Jake Wightman also booked his place in Tokyo with a dominant victory in the men’s 1,500m.

The Commonwealth Games bronze medallist finished well ahead of his competitors in a time of 3:34.67 – just inside the qualification time.

There was a British one-two in the women’s 800m, with Jemma Reekie and Laura Muir crossing the line first.

Ethiopia’s Almaz Ayana held the previous record of 29:17.45, set at the 2016 Rio Olympics, but Hassan shaved more than 10 seconds off that mark.

Hassan is the reigning world champion having won gold in Doha in 2019 and the 28-year-old set down a marker before next month’s Tokyo Games, blowing away the competition and sprinting solo across the line with her arms outstretched in celebration.

“Wow, to run this world record here today in Hengelo is something I could only dream of,” the Ethiopian-born Hassan said.

“It’s the perfect confirmation of the hard work we’ve put in getting ready for Tokyo. I am so happy to share this record in front of my Dutch fans.”