Ever since she stepped into the spotlight as a goalkeeper for the U.S. Women's National Team in 2000, Hope Solo's life has seemingly been an endless series of high-profile peaks and valleys.

She won Olympic gold medals in 2008 and 2012 but was benched in the 2007 Women's World Cup semifinals as the U.S. lost. After falling short again in 2011, she helped lead Team USA to the World Cup title in 2015. Her final international appearance ended with a penalty-kick loss to Sweden in the 2016 Olympics.

But Solo's lowest point was one never made public, until she revealed in an interview for the July issue of Elle magazine that she suffered a miscarriage in February 2018.

Solo told the magazine that she and her husband, former NFL player Jerramy Stevens, had been trying for a while to have a baby. Then about a month after the miscarriage, while still experiencing both physical and emotional pain, she learned from a doctor she had been pregnant with twins — one of them ectopic. 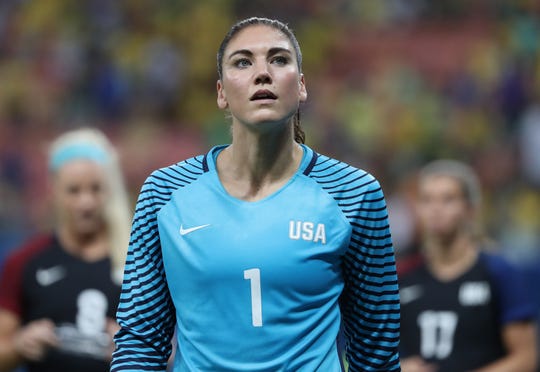 “The doctor said I was hours from dying. They ended up having to remove my fallopian tube,” she told Elle.

At that same time, she was also running for president of the U.S. Soccer Federation. Although she didn't win the election — finishing last — she made equal pay and working conditions for male and female players one of her primary themes at the USSF convention.

"I knew my voice was important,” Solo said. “That speech took a lot. Even before all that, it would have taken courage.”

Since those losses, Solo has continued her fight for women's rights in soccer. With an existing gender discrimination complaint with the Equal Employment Opportunity Commission at a standstill, she filed a federal lawsuit against the USSF last August. In March, all 28 members of the current U.S. Women's National Team joined her.

OPINION: US women did what was necessary in 13-0 blowout of Thailand