Last week, the focus was on running backs with injuries to Nick Chubb and Austin Ekeler. Fantasy teams likely padded their rosters with backups and anyone else with a path to playing time.

In Week 5, the Vikings' Dalvin Cook suffered a groin injury, which will elevate Alexander Mattison (136 total yards vs. Falcons) to starter status.  Mattison and the rest of those fill-in backs are most likely rostered by now, so as we turn to Week 6, the focus shifts to wide receivers.

Recommended bids based on a free agent acquisition budget (FAAB) of $100 for the season.

WR Chase Claypool, Pitsburgh Steelers ($45). With four touchdowns and 116 total yards against the Eagles, Claypool had the best fantasy day of any wide receiver this season. Picking him up now gets you none of those stats. However, Claypool does have several advantages that make him worthy of a significant FAAB bid or using the No. 1 waiver priority. 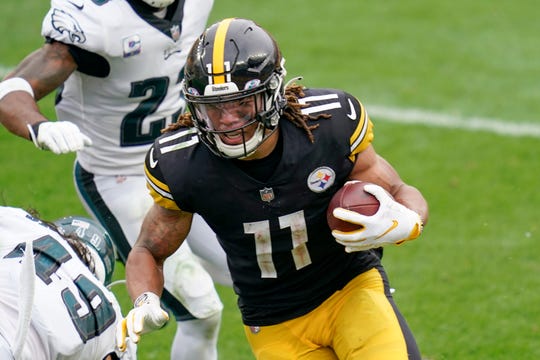 Steelers wide receiver Chase Claypool heads to the end zone for one of his four touchdowns in Week 5 against the Eagles. (Photo: Keith Srakocic, AP)

With a bye week in the rear view and several favorable matchups coming up, he should continue to see plenty of targets in the passing game. He also had three rushing attempts in Week 5 (and scored a TD on one of them), so the Steelers are making a conscious effort to get the ball in his hands. Add in Diontae Johnson's nagging injury issues and you have a player with serious impact potential for the rest of the season.

QB Andy Dalton, Dallas Cowboys ($18). A devastating injury cut short what was shaping up to be a record-setting season for Dak Prescott. Fantasy teams with Prescott as their locked-in starter probably need to pay top dollar to add Dalton. Although he can't possibly live up to the standard Dak set, the Cowboys' receiving corps hasn't changed. It’s not a stretch to see Dalton stepping in and putting up QB1 numbers.

WR Travis Fulgham, Philadelphia Eagles ($13). Until two weeks ago, Fulgham hadn’t played a single snap in 2020. However, he found the end zone in Week 4 and on Sunday, caught 10 passes for 152 yards and another touchdown. Perhaps Carson Wentz has finally found a go-to wide receiver.

WR Brandin Cooks, Houston Texans ($15). If Cooks is still available, it's likely because he was dropped last week after being held without a catch. Against the Jaguars, he had eight receptions for 161 yards and a touchdown. The talent is still there.

WR Mike Williams, Los Angeles Chargers ($13). Williams may also have been dropped earlier in the season because of hamstring issues and limited productivity. But he came up big on Monday night with five catches for 109 yards and two scores. If Keenan Allen's back injury is limiting in any way going forward, Williams becomes the second-best pickup of the week.

10/13/2020 Sport Comments Off on Fantasy football waiver wire: Steelers’ Chase Claypool rises to the top of deep wide receiver pool
Recent Posts
We and our partners use cookies on this site to improve our service, perform analytics, personalize advertising, measure advertising performance, and remember website preferences.Ok