AFTER a slow start, Manchester United ended the summer transfer window with a bang. 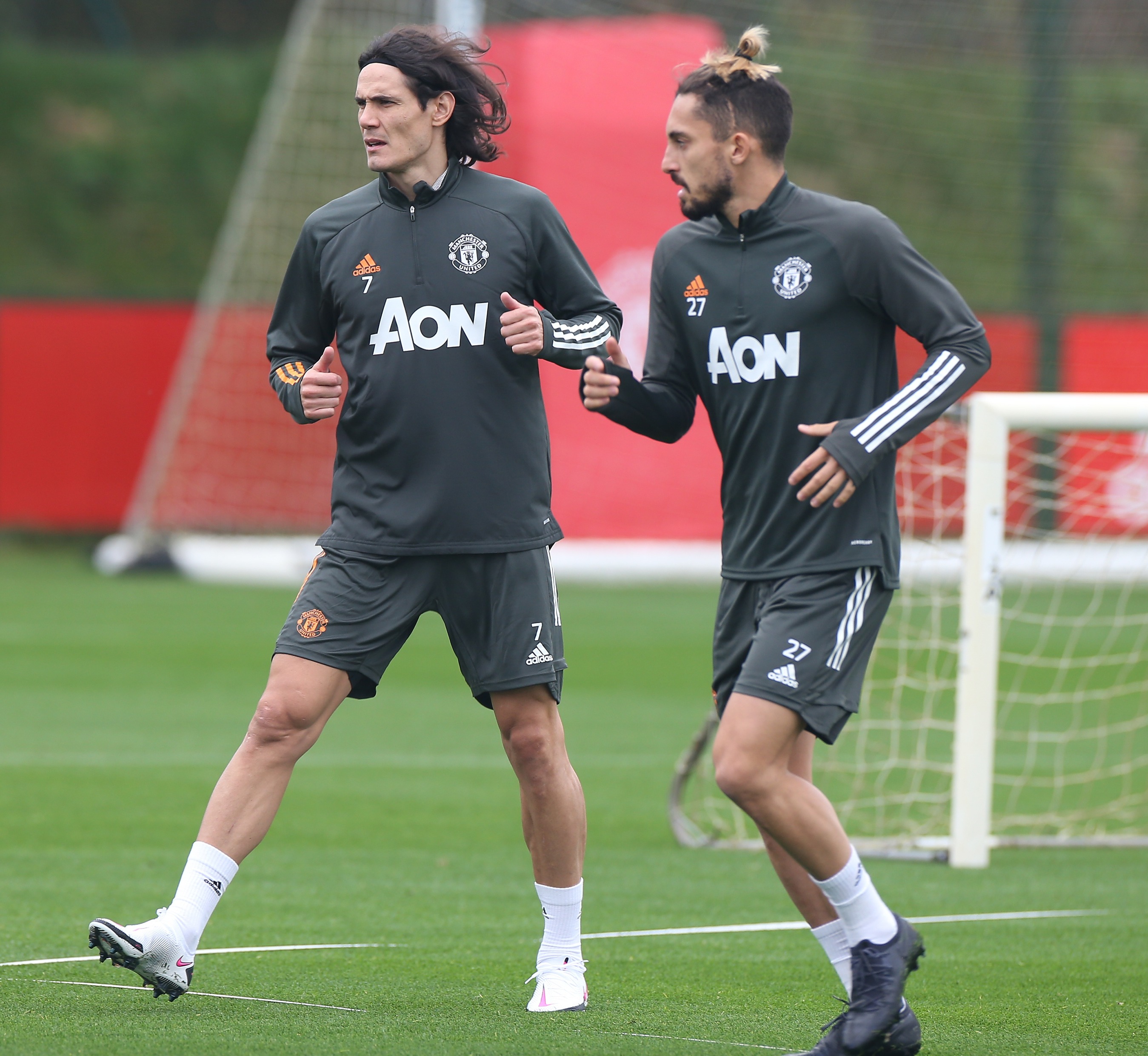 But, in the final hours of the window, United landed both Edinson Cavani and Alex Telles – as well as youngsters Amad Diallo and Facundo Pellistri.

Now, the challenge for Ole Gunnar Solskjaer is how to fit both Cavani and Telles into his team – starting with the Champions League clash at Paris Saint-Germain.

The Man Utd chief already has difficulty getting Bruno Fernandes, Paul Pogba and Donny van de Beek into the team together.

And now he must figure out how to get Telles and Cavani into his XI – which could mean completely tearing up his plans and starting from scratch.

Immediately after lockdown, United went on an incredible run of wins, inspired by Solskjaer's 4-2-3-1 formation, with Fernandes floating behind the striker in the No10 role.

But so far this season, it's been a mixed bag for Solskjaer – with a formation change possibly on the horizon.

We take a look at FIVE ways United could line-up in 2020-21 in order to get the best out of Cavani and Telles. 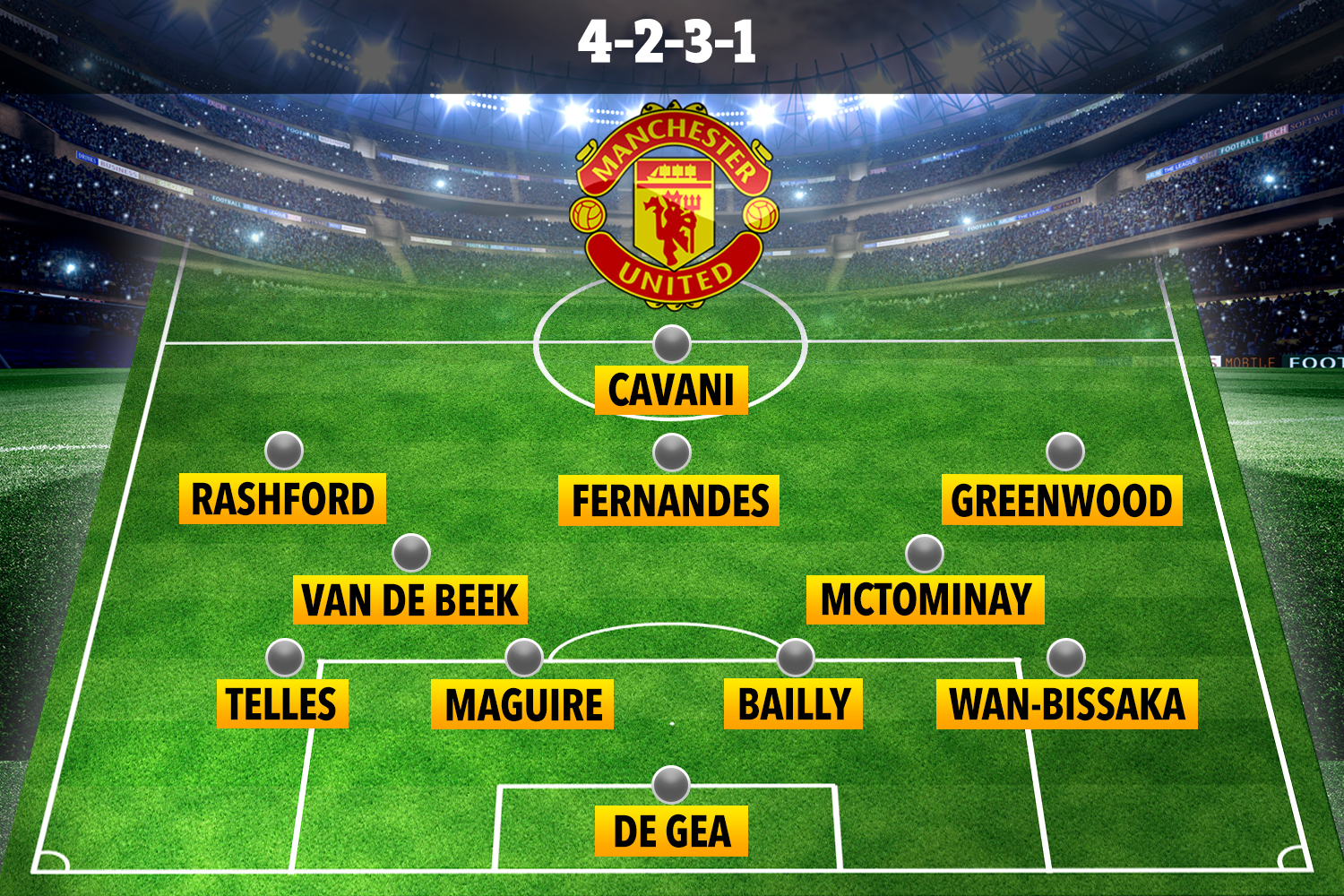 IT could be Solskjaer believes the two new-boys could fit into his current system.

In the 4-2-3-1, Telles would come in for Luke Shaw and Cavani would replace Anthony Martial as the sole striker.

Martial could be shunted out left – where he has spent much of his United career – but that would force Marcus Rashford either onto the right wing or the bench.

Fernandes would play just off Cavani in the No10 role, with Mason Greenwood likely to start on the right-wing.

In midfield, Van de Beek would likely keep Pogba out of the team, with the more defensive-minded Scott McTominay holding down the fort.

David De Gea appears to be Solskjaer's No1 – at least for Premier League games. 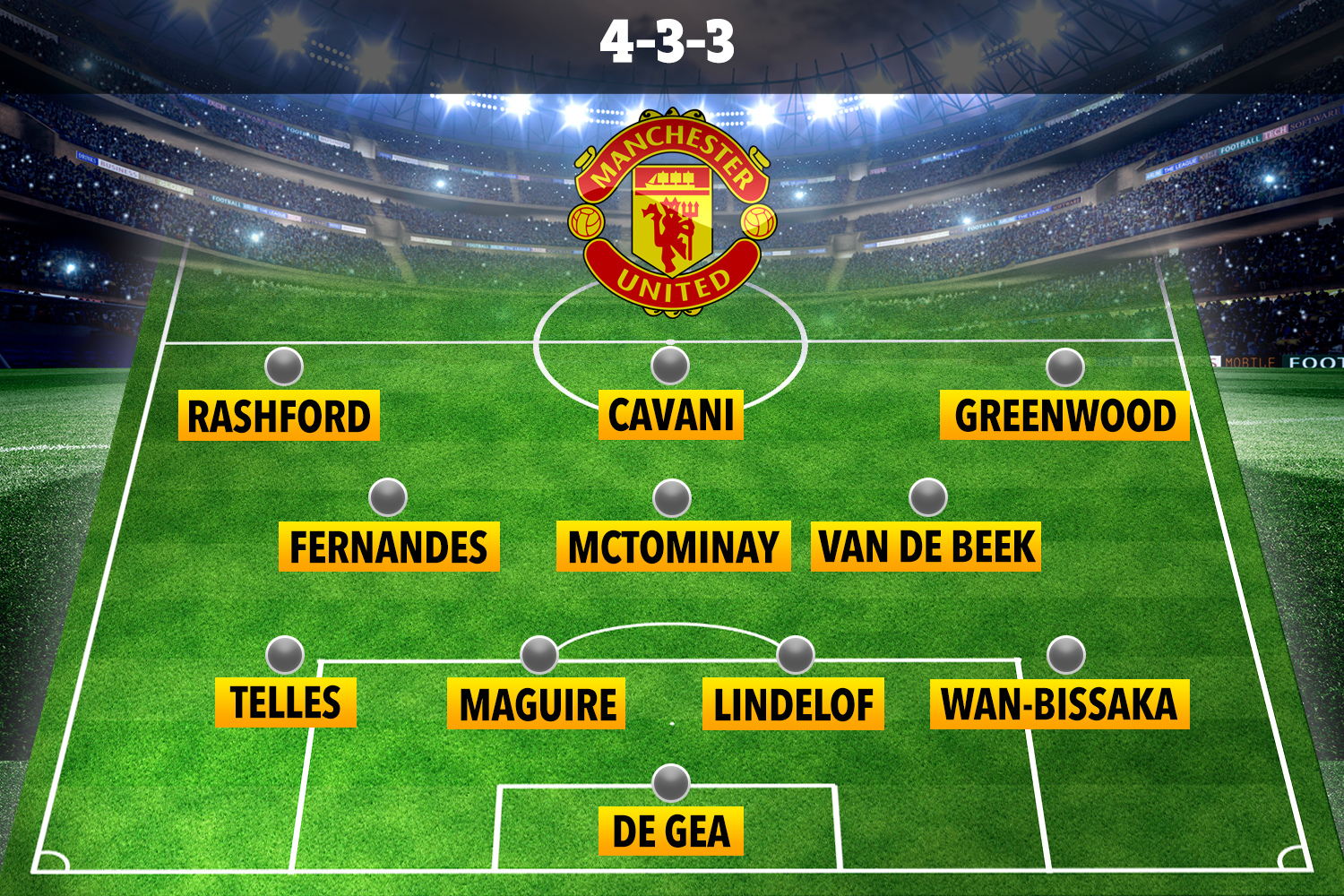 IN this formation, arguably the most-popular in world football at present, the defence would look the same.

Telles would again start as a traditional left-back.

And Cavani would instead have three central midfielders feeding him the ball with no No10.

Fernandes would instead start deeper alongside Van de Beek – both of whom would roam more freely than McTominay.

Rashford and Greenwood are the most-likely starts on the wing, with Martial demoted to the bench. 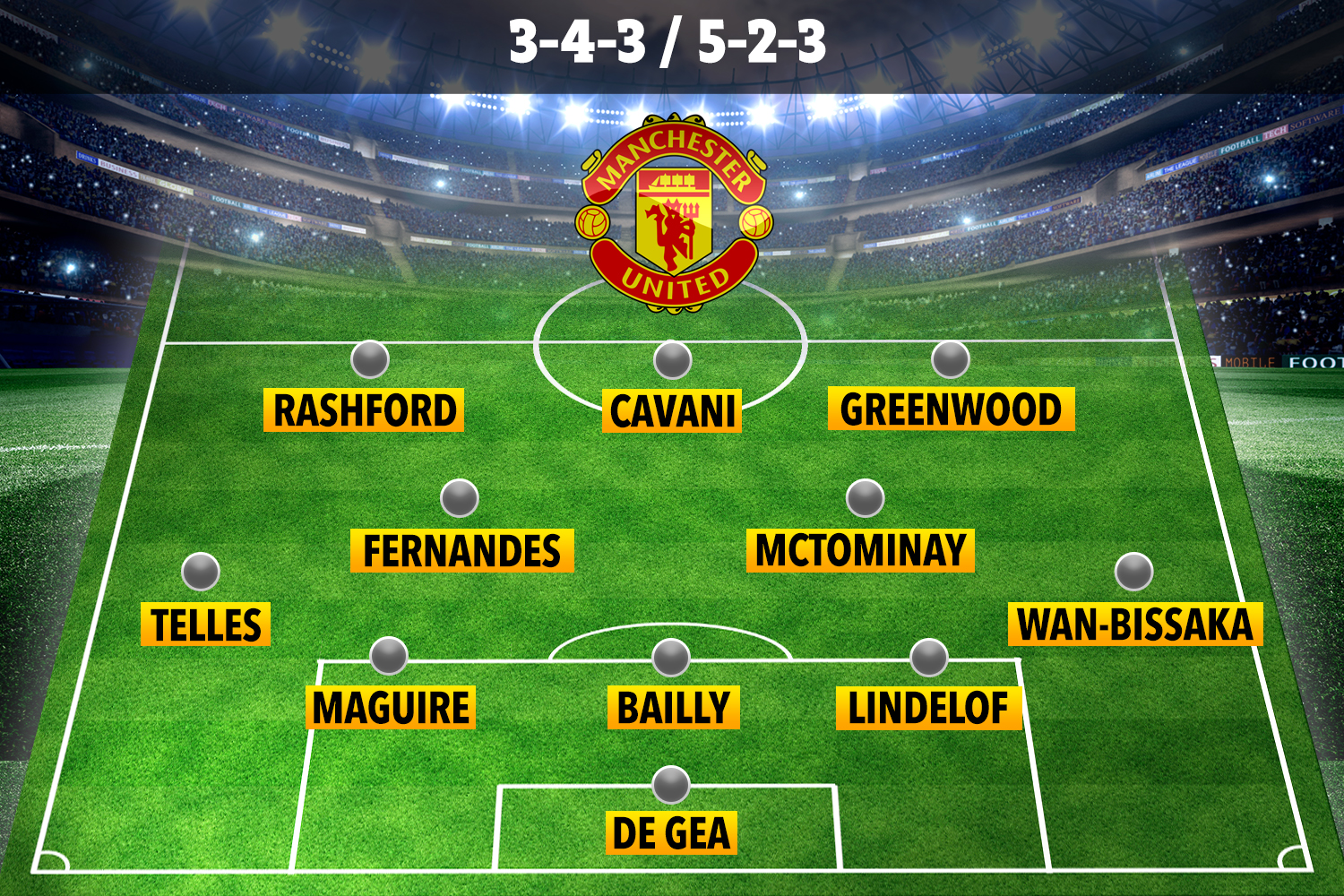 THIS formation is increasing in popularity in recent seasons, since Antonio Conte enjoyed so much success with it during his time at Chelsea.

And it could work for Man Utd in 2020-21 – with Telles' best position arguably in a left-wing-back role.

Wan-Bissaka would start on the right, with Maguire and Lindelof joined by Eric Bailly in the heart of defence.

United's defence is their Achilles heel this season – and Maguire has proven in the past he is best-suited to playing on the left of a back-three.

Adding more bodies to the defence could allow the midfielders and forwards to attack with more freedom, rather than worrying about their defensive duties.

This formation still alows for three forwards – and plenty of width.

But the wingers – likely Rashford and Greenwood – would be able to slot in more narrowly, with Wan-Bissaka and Telles given licence to overlap on the wings.

That essentially allows for three centre-forwards, including Cavani, while in possession – but still with three central defenders providing cover.

McTominay would likely sit in front of the back-three, with Fernandes pushing forward – with Van de Beek and Pogba threats off the bench. 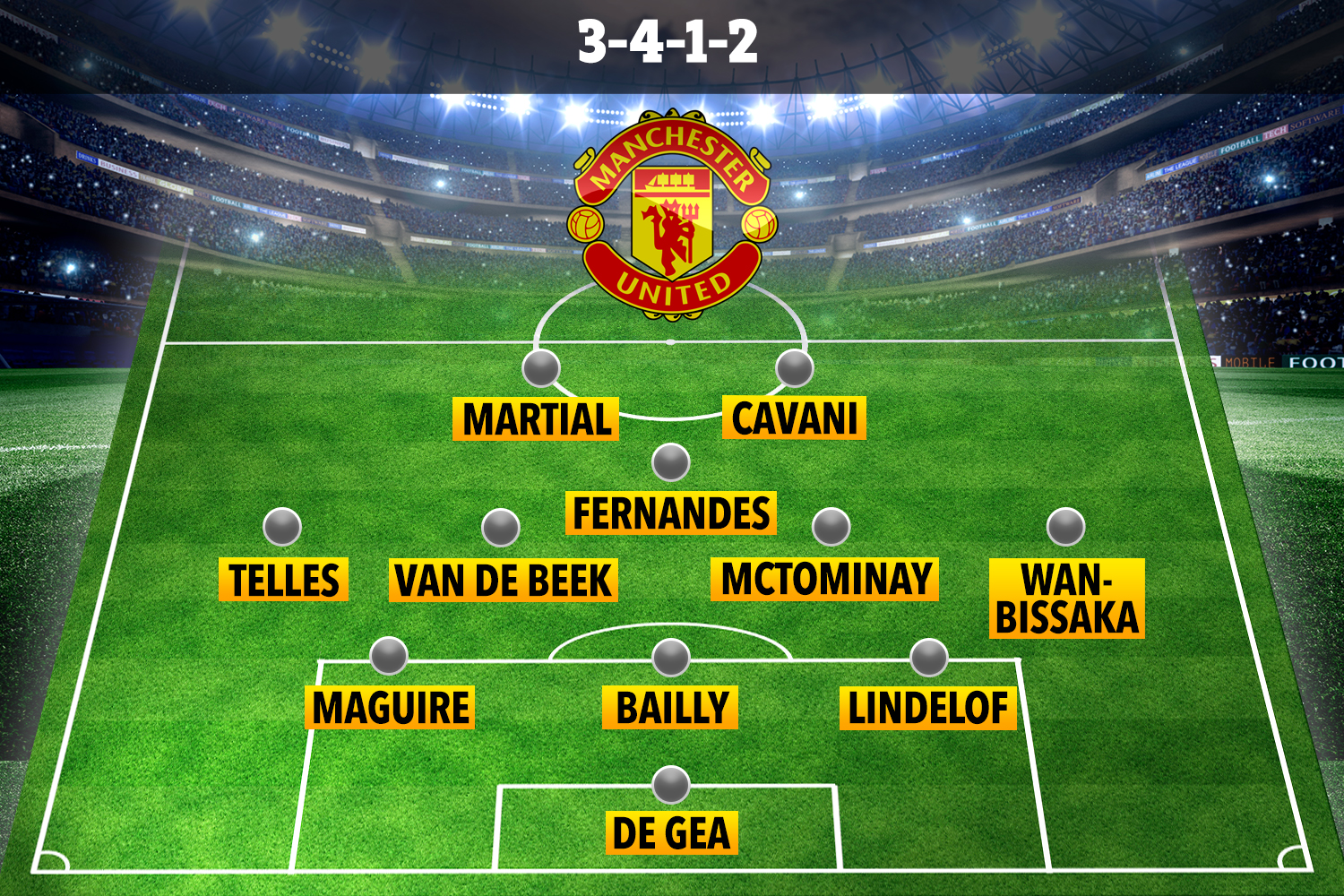 Solskjaer could line-up with the same back-three / back-five.

But ahead of them, would be THREE central midfielders rather than two.

With United's strongest area arguably being the centre of midfield, that play right into Solskjaer's hands.

In this scenario, McTominay could start alongside one of Van de Beek orPogba – with Fernandes just ahead of them.

The Portuguese star would also provide support for a traditional front-two.

With Cavani starting, United would love an injection of pace alongside – with one of Martial or Rashford proving the perfect foil.

This formation sacrifices a touch of width – relying purely on the wing-backs – but plays to United's strength through the middle. 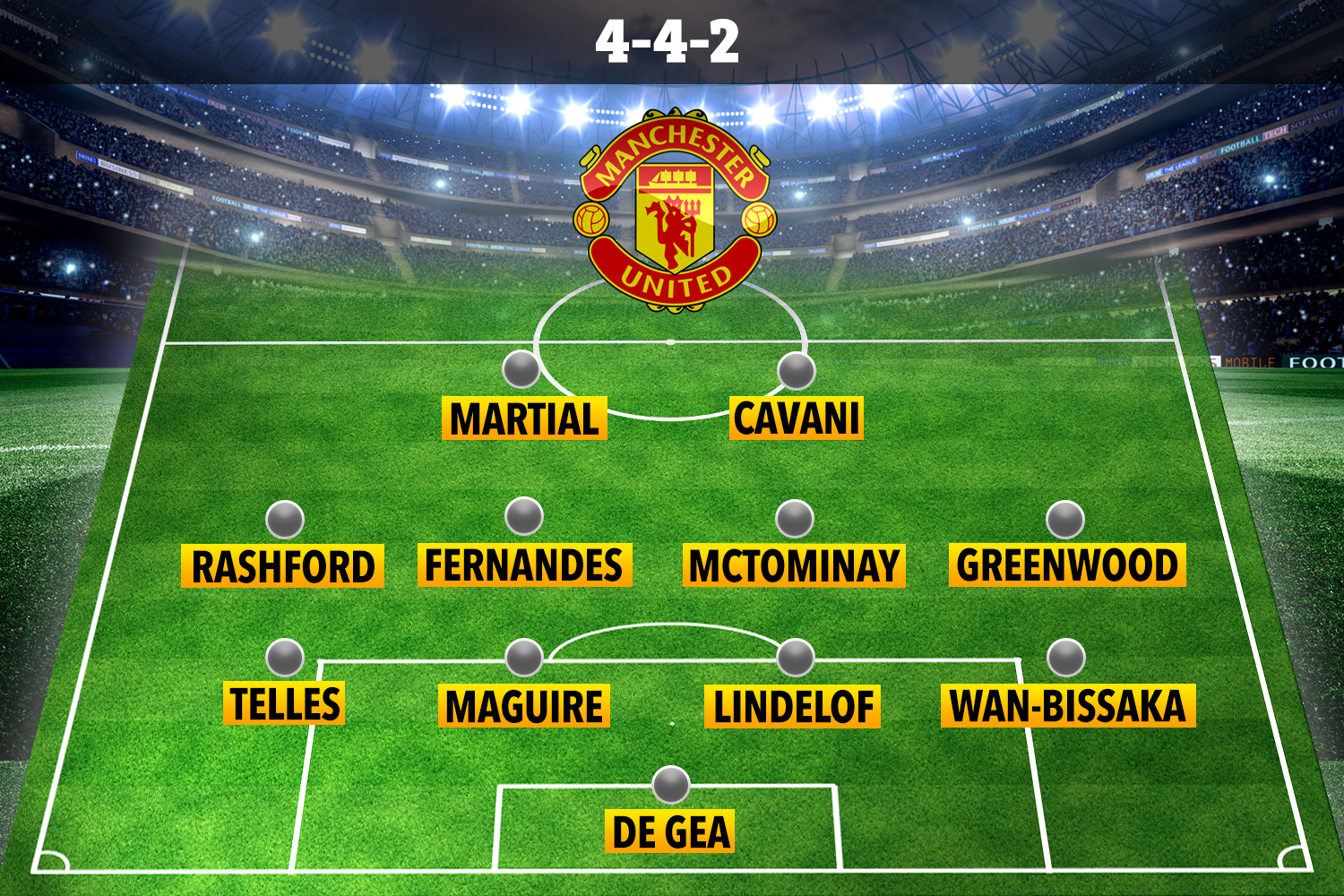 IT may be deemed 'old-fashioned' by some, but 4-4-2 would allow United to field an ultra-attacking team.

In fact, they could squeeze FOUR natural strikers into the team, with Cavani and Martial playing centrally, with Rashford and Greenwood on the wings.

This formation does sacrifice one of the central midfielders, but coul reap the rewards.

With the same back-four as in the 4-2-3-1 AND McTominay in the team, there would be plenty of defensive cover.

Fernandes could then push forward and join the what could be considered a front-four.

In this formation, though, Rashford and Greenwood would be expected to track back and help out on the defensive end.

10/19/2020 Sport Comments Off on Five formations Man Utd could use to fit Edinson Cavani and Alex Telles in with Solskjaer ripping up plans
Recent Posts
We and our partners use cookies on this site to improve our service, perform analytics, personalize advertising, measure advertising performance, and remember website preferences.Ok