RENNES, France — She has not played a second in the Women’s World Cup. In fact, she is not a player at all. But Nualphan Lamsam of Thailand has provided one of the tournament’s most viral, celebrative and heartwarming moments, representing a team that has been widely applauded for responding to overwhelming defeat with dignity and persistence.

Many on social media were struck by the joyfully tearful response of Lamsam on the Thai sideline, when the team finally scored a goal of its own on Sunday after surrendering 13 to the United States and four in an ongoing match to Sweden.

A short thread about the woman who burst into tears on the bench when Thailand scored against Sweden on Sunday. She is NOT just a random Thai staff member. https://t.co/bD9ODAlKLb

Lamsam, 53, is the general manager of the Thai national team, known for her vital financial aid, positive attitude and expressions of emotion during important soccer moments. In her day job, she is the chief executive of one of Thailand’s largest insurance companies, an heiress to a banking fortune and a jet-setter widely referred to by her nickname, Madam Pang.

She is also president of a men’s team in the Thai Premier League. After Sunday’s World Cup match against Sweden, she flew home to Bangkok on business but also found time to watch her club win a domestic cup match. She was scheduled to return to France for Thailand’s final group match on Thursday, against Chile.

She is already a familiar face to many. After Thailand’s captain, Kanjana Sung-Ngoen, scored in the waning minutes against Sweden, Lamsam began crying and hugged her team’s coach. Later, she smiled broadly in a team photo, holding her right hand aloft as many players gave a thumbs up. It was impossible to tell from the jubilant photo that Sweden, not Thailand, had prevailed by 5-1.

“Winning or losing is not as important as having the heart and spirit back from a feisty performance,” Lamsam wrote on her Instagram account.

Thirteen years ago, after working with disabled athletes, she became the team’s general manager at the request of a former president of the Thai soccer federation. Lamsam had never played soccer and had no experience in the sport. But she agreed to take on the role after meeting the players, and has since become one of a very small but powerful group of benefactors of women’s soccer in countries where players have been largely ignored, dismissed and severely underfunded.

“She’s not just a manager to us; she’s like a mother,” Ainon Phancha, a Thai defender, said Wednesday. “She’s the head of the family.”

Julie Foudy, a former captain of the United States national team and a longtime activist for equitable treatment of female players, refers to Lamsam and Cedella Marley of Jamaica, the eldest daughter of the reggae legend Bob Marley, as “angels” for helping to fund their country’s women’s national teams when their own soccer federations have been indifferent.

But, Foudy added, in reference to FIFA, soccer’s world governing body, which has historically lagged in its support of women: “When do we get to a place where we don’t need someone to come in and save these players? This is FIFA’s job. 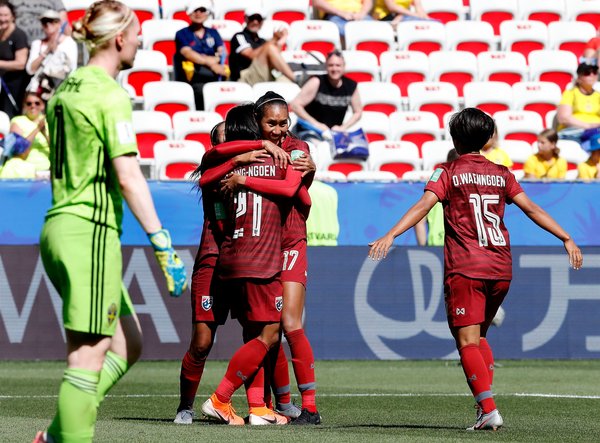 “Why aren’t they saying to these federations: ‘This isn’t good enough. You haven’t funded your program in three years.’ There’s no accountability. There’s no transparency. That’s the problem. Nor do they seem to care.”

Cedella Marley’s support for Jamaica, which lost all funding from its national soccer federation several years ago, resulted in the team’s arriving in France as the first from the Caribbean to qualify for a Women’s World Cup.

In Thailand, the men’s national team has never qualified for the World Cup, and the country’s professional league has been hindered by corruption and match fixing. Women’s soccer has been more successful internationally, but at home it receives scant attention, respect and financial support.

So Lamsam has helped fund the national team’s salaries by hiring them into her insurance company, and she handed out bonuses during World Cup qualifying so that the players could focus on soccer without having to go job hunting. Thailand is now participating in its second world championship.

“She is everything to us,” said Nuengruethai Sathongwien, Thailand’s coach. “She builds a future for all of the players.”

After qualifying for its first Women’s World Cup, in 2015, and defeating the lesser-ranked Ivory Coast, 3-2, in group play, Thailand has been besieged in this year’s tournament. Still, it has maintained its composure and insistence. After the opening 13-0 loss to the United States, Lamsam led the Thai players around the perimeter of the field to thank Thai supporters. While some players cried, she did not, Thai reporters said.

Instead, Lamsam offered encouragement, writing on Facebook: “We will fight to the fullest in the two remaining matches with the spirit of sportsmanship.”

Before Sunday’s match against Sweden, dressed in a jacket and slacks, Lamsam gave a vigorous pep talk on the field, raising an arm above her head in rousing encouragement, telling players to perform “as if it is the last game of your life.”

Afterward, she stood in a line with the team, waving and bowing to a crowd that cheered Thailand’s persistence despite its heavy defeat. She told reporters that while her team had scored only one goal, it had been “one of the most important things ever for Thai women’s football” because it had come against a higher-ranked team.

In her autobiography, published in 2017, Lamsam wrote that Thailand’s early struggles in her tenure as general manager did not discourage her. Instead, the “bitter tears shed” encouraged her to devote herself more fully to her role, she wrote.

“And I firmly believe that we can go further still.”