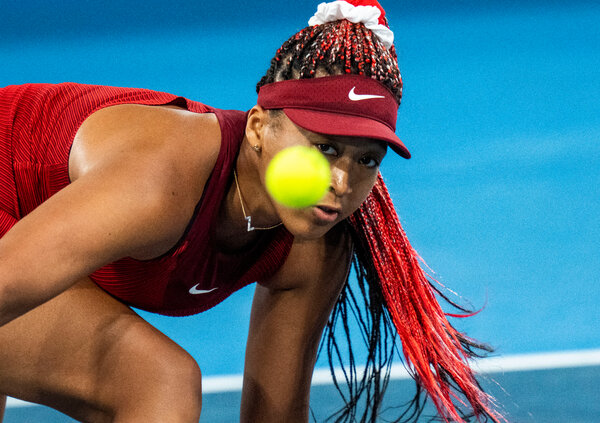 There are favorites, and there are underdogs. And the favorites usually win, of course.

But with more than 300 gold medals to be awarded at these Olympics, the laws of chance say that sometimes the favorites will stumble. It has happened before. The Russian ice hockey team in 1980. The wrestler Aleksandr Karelin in 2000. The American softball team in 2008.

In just the first few days of the Tokyo Olympics, some big names are joining the list.

After Simone Biles abruptly withdrew from the team competition Tuesday night, the U.S. took home the silver medal in an event they had long dominated and were favored to win. Russia won gold, and Britain claimed bronze.

Osaka became the face of the Games when she lit the cauldron at the opening ceremony. A gold medal in tennis would seem to have been the logical end to her story. Yet Osaka lost Tuesday to the 42nd-ranked player in the world, Marketa Vondrousova of the Czech Republic, in a third-round trouncing, 6-1, 6-4. It took less than an hour.

Barty, the Australian tennis player who is the world No. 1, was eliminated in the first round after she fell in straight sets to Sara Sorribes Tormo of Spain, 6-4, 6-3.

The United States men’s basketball team had a couple of stumbles in exhibitions leading to the Games but was still a big favorite going in. It lost its opening game to France.

The World Cup-winning U.S. women’s soccer team showed little of its customary swagger in a 3-0 capitulation to Sweden. It also played Australia to a scoreless draw, although that was good enough for the U.S. to advance to the knockout round. On the men’s side, the pretournament favorite Spain opened with a draw against Egypt.

Japan beat the U.S., 2-0, on Tuesday in a replay of the last time these two rival teams faced off for the gold medal at the 2008 Beijing Games, when Japan won and softball was then dropped from the Olympics. The win marks Japan’s second consecutive Olympic gold in the event.

China rarely loses in diving, and even less often in synchronized diving. Yet the men’s team lost to Britain in the synchronized platform event.

Another bad day for China, as Japan ended China’s dominance in table tennis with a gold medal in mixed doubles.

China won all four gold medals at the 2016 Rio de Janeiro Games and the team of Xu Xin and Liu Shiwen was a heavy favorite this time. But Jun Mizutani and Mima Ito defeated them.

Granted, it was foretold, as her emerging rival, Ariarne Titmus of Australia, had posted better times than her recently in the 400-meter freestyle. But it was still stunning to see Ledecky, one of the most dominant distance swimmers in a generation, out-touched at the wall to be relegated to the silver medal.

Will there be more?

Here’s a not very daring forecast: They might not all win.

07/27/2021 Sport Comments Off on Here’s a look at some of the biggest upsets so far.
Recent Posts