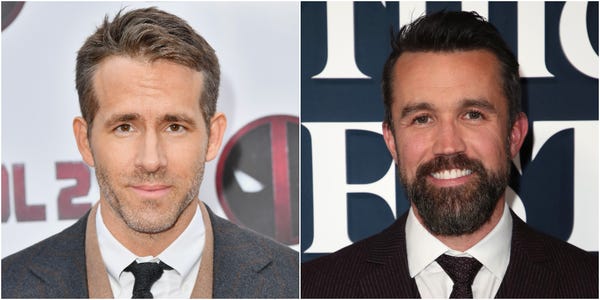 Hollywood stars Ryan Reynolds and Rob McElhenney are in talks to complete a shock takeover of one of the world's oldest soccer teams, Wrexham AFC.

Reynolds, best known for his roles as Deadpool, The Green Lantern, and Detective Pikachu, and McElhenney, the creator of popular sitcom It's Always Sunny in Philadelphia, are set to put forward their vision for the Welsh club in a meeting with its members in the near future.

Wrexham, the third oldest professional soccer team in the world, is currently owned by its fans and plays in the fifth tier of English soccer.

A total of 1,223 Wrexham Supporters Trust members (95%) voted in favour of the proposed takeover, which could see Reynolds and McElhenney immediately invest $2.5 million, reports Sky Sports.

"As confirmed this morning, 97.5% of voters (1,223 members) voted in favour of the resolution," read a statement released on Wednesday by the club.

"As a result, talks with the proposed bidders will now continue and we are in a position to confirm the two people interested in investing in Wrexham AFC.

"In due course, Mr McElhenney and Mr Reynolds will put forward their vision for Wrexham AFC and proposal for members to vote on at a second special general meeting."

Wrexham director Spencer Harris told PA, as per Sky Sports, that while the deal is still in its early stages, he hopes it can cultivate mass in the coming weeks.

"I would like to think that Rob and Ryan think Wrexham is an attractive prospect with fantastic potential" Harris said. "People with the professionalism of Rob and Ryan do not come around very often and news of their interest is quite exciting for the supporters I'm sure.

"They are very driven individuals and very successful people in their industry. But from our discussions I can say they are both down to earth and want what is best for the club."

09/24/2020 Sport Comments Off on Hollywood stars Rob McElhenney and Ryan Reynolds are, for some reason, buying Wrexham AFC, one of the world’s oldest football teams
Recent Posts