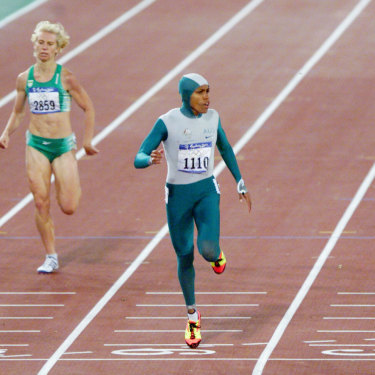 Cathy Freeman crosses the line first in the 400m on September 25, 2000.Credit:Craig Golding

The fourth evening of the athletics program at the Sydney Olympics in 2000 is still considered “the greatest night of track and field in the history of the sport”.

This was the honour accorded “Magic Monday” – September 25, 2000 – by officials of the International Amateur Athletics Federation during the Games.

To Australians, it’s better known as “Cathy’s night” – when Freeman won gold in the 400 metres after a tumultuous lead in where her great rival, the double Olympic champion, Frenchwoman Marie-Jose Perec, withdrew from the race and fled to Paris.

Carrying the cargo of the nation’s hopes, Freeman delivered gold and glory in spectacular fashion in her Spiderwoman suit, being the first Indigenous Australian to win an individual Olympic event.

Athletics is the biggest sport on the Olympic program and her gold medal gave us instant respectability, not just as an Olympic City host.

After all, it was 32 years since Australia’s last gold medal in track and field (Ralph Doubell equalled the world record in the 800 metres in Mexico City) and 36 years since a woman had won (Betty Cuthbert, also in the 400 metres in Tokyo).

But the officials of the anachronistically named IAAF, now known as World Athletics, were thinking internationally, factoring in other events that evening.

To these long-term officials, Freeman’s 400 metres was merely the entree to the greatest evening feast of track and field ever seen, despite not a single world record falling during the entire program.

The extraordinary athletes. The attractive events. The huge crowd. The close finishes. 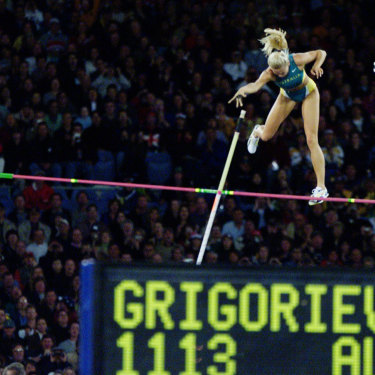 Even the bronze medallist – Vala Flogadottir – was one for the history books, being the first woman from Iceland to win an Olympic medal.

Australia’s Emma George, the pioneer of women’s pole vault in Australia and a former world record holder of 4.60 metres, failed to qualify.

The crowd euphoria over Freeman’s win was so great, the final of the men’s 400 metres was held up several minutes to allow her to run a victory lap.

Running in lane 6 – the same lane as Freeman- was the USA’s Michael Johnson, the Olympic and world record-holder.

It was his final individual Olympic race and he won, of course, in 43.84 seconds collecting his fourth gold medal, equalling Jesse Owens's haul.

When the masterful Johnson is the fourth or fifth best serving at the feast, it demonstrates what was on the menu.

Nor did the USA dominate the night, with Cuba seeing off American might in the 110m hurdles, when Anier Garcia finished ahead of three Americans in another powerful moment.

Britain's Jonathan Edwards was the world record holder in the triple jump, competing in his fourth Olympics, but had won only silver in Atlanta and Athens and had been relegated to bronze at the most recent world championships in Seville.

The son of a clergyman, Edwards had wanted to return home for his mother-in-law's funeral on opening ceremony day. His wife insisted he stay in Sydney and he leapt to a season's best distance to win the gold medal.

Only nine-hundredths of a second separated the first and second placegetters in the men's 10,000m. If one-hundredth of a second is a blink, Ethiopia's Haile Gebrselassie won by nine of them in defeating Kenya's Paul Tergat, keeping intact his seven-year unbeaten record over this distance. The pair sprinted side by side for the final 100 metres of the 25 lap race.

Tall, thin Irishwoman Sonia O'Sullivan was beaten by a quarter of a second in the 5000m, after trying four times over the final 200m to overtake the winner, waif-like Romanian Gabriela Szabo, in Olympic-record time.

Earlier in the day, Australian long jumper Jai Taurima qualified fourth for the final which was held three nights later.

A self-confessed party animal who smoked a packet of cigarettes a day and never went to bed before midnight, he played to the crowd like Grigorieva. But the Cuban world champion, Ivan Pedroso, spoiled his party, relegating Taurima to a silver medal. 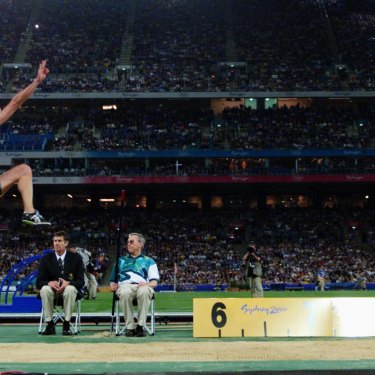 Only “Super Saturday” – August 4, 2012, at the London Olympics – betters Magic Monday, but that’s in the eyes of Lord Sebastian Coe, dual gold medallist in the 1500 metres at the Moscow and Los Angeles Olympics and chairman of World Athletics.

But Lord Coe was also president of the London Organising Committee of the Olympic Games and, as one of his compatriots, Mandy Rice Davies once remarked, “He would say that, wouldn’t he?”

“Up until last night, I would never have queried that the greatest night was Magic Monday in Sydney, the Cathy Freeman night … That was an extraordinary night and this did edge ahead of it.”

However, of Great Britain’s six gold, only three were in track and field.

Those three – Jessica Ennis in heptathlon, Mo Farah in the 10,000 metres and Greg Rutherford in the long jump – were won in less than an hour.

But in terms of the international spread of results, the diversity of events, the great athletes on display and the close finishes, other champions, such as Australia’s Herb Elliott give Magic Monday the nod.

The day following Magic Monday was rest day for track and field and the rain poured down. Magically, it was the only wet day of the program.

I was a guest of Athletics Australia on a rain swept cruise of Sydney Harbour and this was when the IAAF officials gave Magic Monday the best ever tag.

But the atmospheric conditions the previous evening also set me thinking of Tokyo, seven years earlier when I covered the World Track and Field championship. 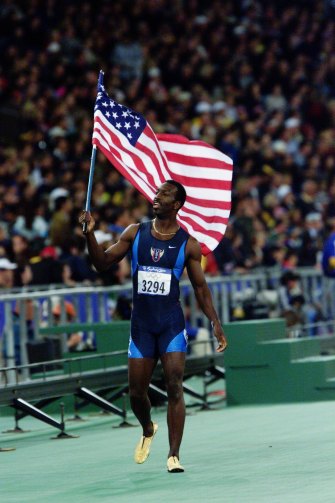 A typhoon had formed in the Sea of Japan and, like Magic Monday, it was if the air itself was full of expectation and excitement.

Thirty-year-old Carl Lewis set a world record of 9.86 in the greatest 100m in history, at Tokyo's Olympic Stadium in 1991, pulling fellow Americans Leroy Burrell and Dennis Mitchell through under the old mark, meaning the first three placegetters all broke the world record.

This was also the meeting where Mike Powell broke Bob Beamon's 23-year-old record for the long jump, but the events were on different nights.

Nothing has ever equalled Magic Monday as the great crowd stood and roared as one, willing Cathy home.

At the end, as the people called her name and the cameras flashed, the noise would not die for the throwers and jumpers and the men’s 400 metres final. Even the French were celebrating, not for their churlish teammate who had abandoned their Narrabeen training camp and was absent, but for all of us who were there.