Kings Cross: “They call him ‘The Anaconda’ and you can see why,” said commentator Don Parker of China’s Xu Xin, who’d just ripped out a miraculous save in the gold medal match in the mixed doubles.

It was in that very moment, with that enlightening remark from Parker in his calming northern English brogue, that I fell in love with table tennis. 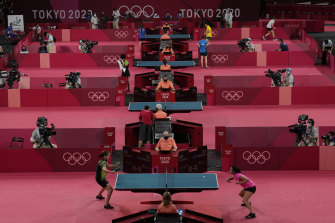 A field of dreams … and tables.Credit:AP

While the rest of you were glued to Kaylee McKeown claiming gold in the pool, and Sally Fitzgibbons struggling to find the knockout wave in the surfing quarter-finals, I was dialled into the gripping third-round showdown between South Korea’s Jeoung Youngsik and Greece’s Gioinis Panagiotis, otherwise known as “The Defentist” because he’s a defensive player who had the day-time job as a dentist.

Why doesn’t this country have the same unhealthy infatuation with table tennis at the Olympics as it does with swimming?

I haven’t busted the numbers, but I’ll bet you London to a brick more Australian households have ping pong tables with a wonky leg and sagging net that needs tightening every five minutes than they do swimming pools in the backyard.

How many of us spent our younger days locked in mortal combat with family members and best mates, in dusty carports and garages, battling away for hours on end with broken bats and dented ping pong balls.

I recall one such match in my teenage years against my father when I overcooked a running top-spin forehand, stumbled and put my shoulder through the fibro wall. He was furious because he’s a bricklayer, not a carpenter.

Australia has a six-member team in Tokyo. Jian Fang Lay, a 48-year-old mother of two from Victoria who is competing in her sixth straight Olympic Games — sixth! — was on Tuesday afternoon our last remaining player in the singles draw.

The outrage police took exception to a Herald story the day before pointing out she is, indeed, a 48-year-old mother of two who has been home schooling her children through COVID-19 lockdowns while training and qualifying just so she can be here.

Really? Really? We celebrate Serena Williams having a child and returning to the court to chase grand slam titles, but we can’t celebrate Lay and what she’s achieved to just be here in Tokyo? Should we just forget about age, and where people are from, and what they’ve done? Just all context altogether?

Lay, a person, lost in straight sets to German Ying Han but has the team’s event, along with the men, starting Sunday.

Much like swimming, the key to a good game of table tennis is a good caller.

For whatever reason, Lay was not afforded any commentary for her match on the live feed. For those of us newly enslaved to table tennis, we need all the help we can get in understanding what’s going on.

To that end, Don Parker calls it a treat. His accent lends itself to cuddling a pint while watching the darts, but in the heady world of table tennis a voice not dissimilar to the Fat Controller from Thomas the Tank Engine is comforting.

In the mixed doubles final between China and Japan, he made this very valid observation: “Can you imagine 6000 Japanese screaming fans being here? What a difference it would make? We will never know …”

In the end, the Japanese pair of Miztani Jun and Ito Mima didn’t need the home crowd to get them home, causing a major upset in beating the heavily favoured pairing of Xin and Liu Shiwen in the seventh and deciding set.

(Just to clarify, Xin is called ‘The Anaconda’ because of his enormous reach. According to the Olympics.com website, he also responds to “Big Boa” and, no, I am not making any of this up).

From what I can gather, the Anaconda is an attacking player while the Defentist prefers to stand several metres behind the table, chopping under the ball with mind-bending backspin.

He’s been nicknamed the Defentist by American commentator Adam Bobrow, who is the extroverted voice of the sport internationally.

I must say Bobrow is also a little punishing. A lot punishing.

“Can have some more side-spin with that dish please?” Bobrow boomed after the Defentist won an absorbing rally against Youngsik. “That just bent my mind!”

Whatever the Defentist was doing was working, holding seven match points in the fifth. He just couldn’t land the killer chop. Like a fat kid crashing through a fibro wall, he completely blew it, losing 14-12 in the seventh.

And, with those remarks, my brief affair with table tennis was over, switching over to my true love of beach volleyball.

“F… yeah! I mean ‘woooo!’” — Kaylee McKeown when asked by Seven’s Nathan Templeton what she wanted to say to her family at home in Australia after winning the 100m backstroke. Now that’s gold.

Australian surfer Owen Wright shrugged off the disappointment of watching teammate Sally Fitzgibbons failing to win a medal in the women’s — and fears a few years ago he’d never surf again after a heavy wipeout at Pipeline — to claim bronze against world champion Gabriel Medina. #shakaemoji

The banks of empty seats at state-of-the-art facilities are quite sad. May we suggest the Tokyo Organising Committee take the lead of those who really know how to handle this depressing sight — NRL clubs — and fill them with massive banners. Perhaps Canterbury could loan them the huge “BULLDOGS” sign on display at ANZ Stadium.

It’s a big day five for … the Boomers, who meet Italy at the Saitama Super Arena on Wednesday night. We’re loving the commentary of Andrew Bogut and Andrew Gaze.

It’s an even bigger day five for … Dean Boxall as Ariarne Titmus once again eyeballs American great Katie Ledecky, this time in the final of the women’s 200m freestyle. Glass balconies, beware.

Never miss a medal or great sporting moment with our Olympic update emailed daily. Sign up for our Sport newsletter here.