ST. PETERSBURG, Fla. — The breakout came in the year he turned 30, but his talent was clear long before. A power left-hander with a knockout fastball and slider, he had made an All-Star team but regressed, struggling for the right way to harness his strength. He piled up strikeouts — but also walks — like few others in baseball.

Also, he once killed a bird with a ball in flight.

All of that, of course, describes Randy Johnson, who became the most decorated left-hander in baseball history. It also describes Robbie Ray, the surprise ace of the Toronto Blue Jays. Ray claimed his bird a couple of years ago — not with a pitch at spring training, as Johnson famously did, but on a drive at the Camelback Golf Club in Scottsdale, Ariz.

Now, Ray may soon claim the American League Cy Young Award. As the Blue Jays fight for a wild-card spot, Ray has been the most durable and dominant pitcher in the league, leading the A.L. in earned run average (2.72), strikeouts (238) and innings (182). Johnson led his league in those categories in two of his five Cy Young seasons, enthralling a young fan in Brentwood, Tenn.

“He didn’t back down from anybody,” Ray said of Johnson. “He was going to go out there and cram it down your throat — and I really, really liked that mentality.”

Ray, who turns 30 on Oct. 1, joined the Blue Jays in a trade with the Arizona Diamondbacks last summer. He returned in November for one year and $8 million, a bargain for Toronto that sets up Ray as a premier free agent this off-season. His work with Johnson in the Diamondbacks organization, he said, helped give him the foundation to trust his extraordinary ability. 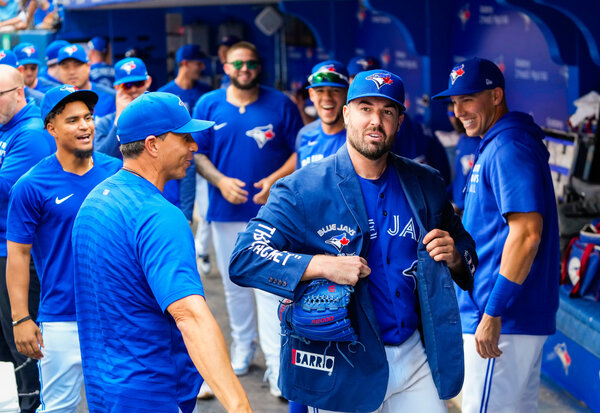 “I enjoy talking to people that are receptive, and Robbie Ray, I could relate to,” said Johnson, now a special assistant to the Diamondbacks’ president, in a telephone interview. “I saw firsthand what other people saw in me when I was in the minor leagues or in Montreal. You’re just trying to get the most out of him, trying to let him know that you’re really good and you’ve got to dig down deep and keep pushing. And it’s easy for me to say that now, because I was a late bloomer.”

Johnson, who won his first Cy Young with Seattle in 1995 after a trade from the Expos, first met Ray in 2015, the year of his Hall of Fame induction. Ray was pitching for Class AAA Reno then, and Johnson took a natural interest because of their similar pitching profiles. In time, Ray said, Johnson became a mentor with the clout to give him tough love.

In 2017, his second full season in the majors, Ray was merely ordinary: through eight starts, he had a 4.57 E.R.A. Johnson, who would watch Ray’s starts with keen interest from the general manager’s box at Chase Field, confronted him in the clubhouse.

“He sat down in my locker and it was basically like a big brother who gets you in a headlock, like: ‘You better figure this out, because you never know when your last pitch is going to be,’” Ray said. “And I took that to heart. I ended up rattling off a 26 and two thirds inning scoreless streak, went to a sub-three E.R.A. and kind of ran with it.”

He ran all the way to an All-Star appearance and finished the season with a 15-5 record, a 2.89 E.R.A. and a N.L.-best 12.1 strikeouts per nine innings. But like Johnson — who led the majors in walks in the two years following his first All-Star selection — Ray could not sustain stardom.

From 2018 through 2020 he led the majors in walks, with 199. But among pitchers with at least 300 innings in that span, Ray also ranked fifth in strikeouts per nine, at 12.05. Those ahead of him were Chris Sale, Gerrit Cole, Max Scherzer and Justin Verlander, reflecting the kind of company Ray was poised to join.

To do it, though, he needed a combination of reinvention and rediscovery. Ray planned to add bulk by lifting twice a day throughout the winter, and wanted a delivery to maximize his gains in the weight room. The first pitcher he studied, he said, was the Yankees’ closer, Aroldis Chapman.

“I started to do his motion, and doing that coil-up, something felt familiar to me,” Ray said. “And slowly it started to come back to me, like, ‘I think I’ve done this before.’”

Ray had tried different arm angles with the Diamondbacks, gradually losing his feel for the style that had gotten him to the majors. Mimicking Chapman reminded him of the day he began to use it, at the end of an otherwise woeful 2012 season for Class A Potomac in the Washington Nationals’ chain.

A coach, Chris Michalak, suggested that Ray turn his back in his delivery, enough to show his number to the hitter. It worked for Gio Gonzalez, then an All-Star lefty in the majors for Washington, and Ray felt an instant fit.

The new body and the old delivery have been a perfect match this season, and Pete Walker, the Blue Jays’ pitching coach, could sense immediately that Ray was pitching with renewed focus and purpose.

“We felt like he had his delivery, and we spent a lot of time in spring training and early in the season fine-tuning some things,” Walker said. “But I would say for the last two months, we haven’t had one discussion about mechanics or anything. I just pretty much sit back in the bullpen and watch him throw.”

With his added bulk, Ray’s uniform now fits snugly on his listed 6-foot-2, 215-pound frame. Teammates wear T-shirts poking fun at his lower half — the “A” in “RAY” is a pair of absurdly tight baseball pants — and his jersey looks like it came from a youth rack.

Adding to the look is a sound — Ray grunts on every pitch, a tactic he learned from an Arizona coach, Mike Butcher, after a lackluster bullpen session in 2016. Walking back to the dugout, Ray said, Butcher told him to try throwing every pitch as hard as he possibly could. The grunting, Ray said, helped him do that.

With maximum effort, a Chapman-style delivery, an intimidating presence and a two-pitch mix (he throws a fastball or slider 90 percent of the time), Ray is essentially a closer disguised as a starter — an unusual formula for durability. Yet by finally unlocking his control, Ray forces hitters to swing, which limits his pitches and lets him work deeper in games.

“Opposing hitters know exactly what he wants to do, but he sticks to it,” said Toronto infielder Jake Lamb, a former teammate in Arizona. “When you have an elite fastball and the hitters have to worry about it, it makes his slider that much better.”

Ray has a strong competitor for the Cy Young Award in Cole, the Yankees’ ace, who ranks second to Ray in E.R.A. and strikeouts and has 15 wins to Ray’s 12. But however the voting ends up, Ray has won the bet he made on himself.

“I didn’t want to look back and wish I had done something different,” he said. “I felt like I was being true to myself to just be that guy.”

By that, he means a guy like Johnson, the pitcher he most admired, who has delighted from afar at his former pupil’s progress. Johnson never tried to fix Ray’s mechanics, the essential elements of his transformation. But in helping sharpen the mental edge of another young, wild lefty, Johnson made an impact.

“He inevitably could be the ace of the staff, a guy you could build the rotation around — I think he’s that kind of pitcher, and it looks like things have clicked,” Johnson said. “Left-handers, maybe we’re a little bit slower developers. I know I was. But he’s really come into his own, and I couldn’t be more happy for him.”

09/23/2021 Sport Comments Off on In a Wild Lefty With Huge Potential, a Hall of Famer Saw Himself
Recent Posts