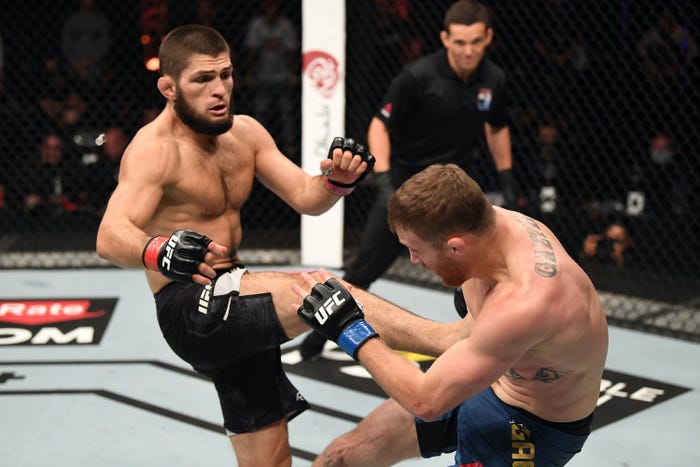 It's becoming increasingly apparent that Khabib Nurmagomedov will un-retire and return to the UFC for one more fight.

The Russian wrestler announced an abrupt retirement after submitting Justin Gaethje with a triangle choke at UFC 254 on Fight Island, Abu Dhabi, in October.

With the American striking maestro regaining consciousness by the Octagon fence, Nurmagomedov dropped to his knees in the middle of the arena and wept, mourning the loss of his father Abdulmanap Nurmagomedov who died aged 57 after coronavirus complications.

Khabib Nurmagomedov then gave an emotional retirement speech at the behind-closed-doors Flash Forum venue, saying he couldn't bear to continue fighting without his dad. It was even a promise he had made to his mother.

Victory over Gaethje was the 29th win of Nurmagomedov's career, an awe-inspiring unbeaten run that has seen him become the world's No.1-ranked mixed martial artist.

And his long-time manager Ali Abdelaziz posted a tweet Tuesday to say there will be a 30th bout.

Abdelaziz's tease is the latest in a long line of comments from Nurmagomedov's inner-circle suggesting the UFC lightweight champion will make at least one more title defense.

Nurmagomedov in late October said the UFC wanted him to fight but he'll instead meet Vladimir Putin, stay retired, and guide the new generation of Dagestani fighters into the upper echelon of combat sport.

But one day later his head trainer Javier Mendez said the fighter was emotionally "all over the place" on Fight Island, and that he could fight one more time providing he got permission from his mother.

Then the UFC president Dana White said "there's a good chance" Nurmagomedov will make a sensational comeback and fight again.

Abdelaziz's tweet is another clear indication that Nurmagomedov may not hang up his gloves.

The only question which remains would be who he would come back against.