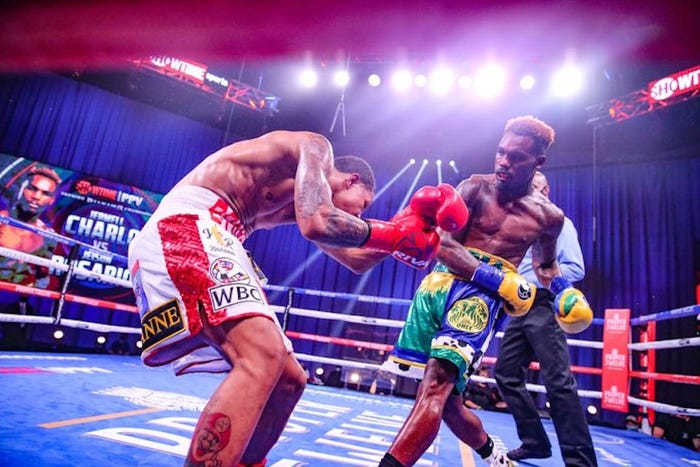 Jermell Charlo prayed for Jeison Rosario when he was beaten, struggling to breathe, and appeared to be convulsing on the canvas.

After Rosario had been knocked to the floor for the third time, winning an eighth round stoppage at the Mohegan Sun Casino in Uncasville on Saturday, the gravity of the situation suddenly dawned on Charlo.

The referee Harvey Dock was administering a count to 10, but there was no way Rosario was going to make it. He could barely move to his side because he was in so much pain, after having an apparent seizure moments before.

"I prayed for him in the ring," Charlo said, according to Boxing Scene. "I hope he's doing better."

The contrast between victory and defeat was laid bare during the greatest boxing event of the coronavirus pandemic to date, broadcast on Showtime pay-per-view.

As Rosario was taken to hospital to recover, Charlo, the king of the super welterweight division, was wrapped in world championship belts.

The 30-year-old then celebrated with his twin brother, Jermall, who had beaten Sergiy Derevyanchenko in a WBC middleweight world title bout earlier on the Premier Boxing Champions card.

It had always been billed as the Charlo Doubleheader. But as Showtime president Stephen Espinoza told Insider last week, it would not be a surprise to see one, or both, of the brothers lose.

"Regardless of who wins it's going to be a career-defining victory for any of the four fighters, Jeison Rosario, Sergey Derevyanchenko or either Charlo," Espinoza said. "These are truly 50:50 fights."

Only Jermell made sure to make it look anything like a competitive fight, while Jermall's win was via unanimous decision having seemingly given Derevyanchenko's brain a rattle with a number of horrifying head shots.

Draped in boxing's gold, the Charlo twins had never seemed so happy

With the WBA, WBC, IBF, and The Ring magazine world title belts decorating the Showtime broadcast table in front of him, Jermell was beaming as he told the sportscaster Brian Custer that he's "the king" of the 154-pound division.

He then got amped speaking about his affection for Jermall. "He's my biggest fan; I love him to death. He's so happy."

The interview finished with Jermell remarking that, together, the Charlo twins are "the new era of boxing."

It is perhaps this era which will usher in a hidden side of the Charlos.

"I think the biggest misunderstanding or misperception of [the Charlos] is that they're angry," Espinoza told Insider ahead of the PBC / Showtime event.

"It's unfortunate in some ways, that when we spend time with them and see them the most, is in the few weeks before a fight and especially in the last week.

"No fighter is in a particularly good mood in the last few weeks before a fight. And some fighters in particular can be very chippy, have a big chip on their shoulders, and that's where I'd put the Charlos.

"Between cutting weight, the mental preparation, and the way they psyche themselves up, they give the impression that they're always angry. That couldn't be further from the truth," he said.

"Get them out when they're not preparing for a fight, and the two of them are like stand-up comedians. They're hilarious, fun, and really entertaining."

It is as of yet unclear when they will entertain next, but after their performances this weekend, they'll likely be doing so in front of even more fans.

09/27/2020 Sport Comments Off on Jermell Charlo prayed for Jeison Rosario when he was beaten, struggling to breathe, and appeared to be convulsing on the canvas
Recent Posts