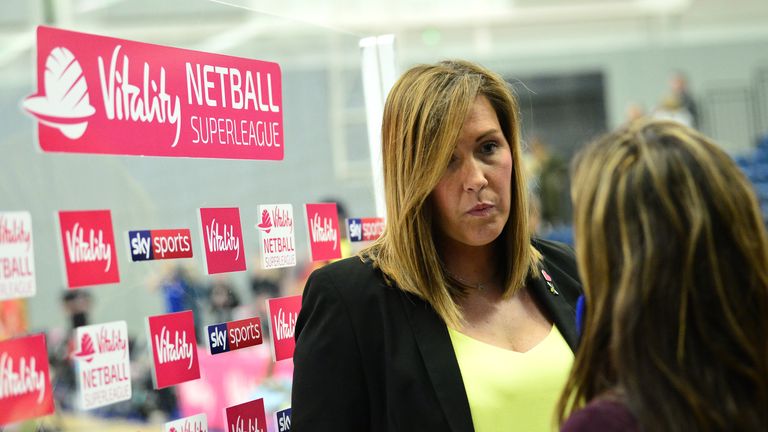 Karen Greig has been appointed as England Netball’s U21 head coach and will prepare players for the World Youth Cup in Fiji 2021.

Greig, who led Manchester Thunder to the 2019 Vitality Netball Superleague title, is looking forward to what’s on the horizon.

“I am really excited and grateful to have been given the opportunity to lead such a talented age group. It’s going to be a completely different challenge for me and I can’t wait to get stuck in,” said Greig.

“I’m also very thankful to Manchester Thunder for fully supporting me with this role and giving me the opportunity to develop further as a coach.”

After starting as a player, the former England shooter has been with Thunder since 2002 and also spent eight years as England Netball’s North West Pathway Coach.

“Less than two weeks after that incredible day when we became the 2019 Vitality Netball Superleague Champions, I want to let every Thunder fan know that I am as committed to this team, and this franchise, as ever. My blood runs black and yellow, and it always will,” added Greig on Manchester Thunder’s official website.

“This is an exciting time for both Thunder and for our sport as a whole. By taking on the U21 head coach role, as well as being Thunder’s director of netball, I look forward to being able to identify, develop and nurture England’s netball stars of the future, something we do so well here at Thunder and across the North West.”

So honoured and grateful to have been given this opportunity to lead @EnglandNetball U21s over the next 2 years as we prepare for the World Youth Cup in Fiji in 2021. Exciting times ahead with an exciting bunch of athletes. Big thanks to @thundernetball for supporting me. ??? https://t.co/Fgb7cS0mAQ

During her coaching career, Greig also assisted Tracey Neville at the 2015 Netball World Cup in Sydney and the Vitality Roses’ head coach believes that this appointment will add significant value to the national set-up.

“To have a coach with Karen’s experience as England U21 head coach will be valuable in leading a programme that not only challenges the athletes but gives them the best preparation in performing at the next World Youth Cup in 2021,” noted Neville.

“Karen has been an instrumental leader at Manchester Thunder, having developed the team and their culture over the past three years.

“She has a wealth of experience at bringing athletes through the North West pathway, having already supported and developed many young and talented players who are now contributing significantly to our Vitality Netball Superleague and Vitality Roses’ success.”

As the new U21 head coach at England Netball, Greig will be responsible for “leading and delivering a world-class programme” for the England’s U21 athletes and preparing them for the World Youth Cup in Fiji 2021.

It was also announced that Sheonah Forbes will be the new pathway head coach. She is taking over from Jan Crabtree, who is retiring this summer after more than 10 years with England Netball.

Forbes has spent 10 years coaching in the North West and the last two years as Manchester Thunder’s pathway head coach.