OAKLAND, Calif. — It’s unlikely Kevin Durant will perform at the same level he did before rupturing his Achilles tendon Monday during Game 5 of the NBA Finals, according to medical experts and academic research.

The rehabilitation will be rigorous and take between nine and 12 months. Durant can expect to wear a cast or walking boot for six to 12 weeks. While the Achilles tendon in his right leg heals, his leg muscle will weaken.

"The Achilles’ tendon is the largest and strongest tendon in the body. It is essential as a spring for locomotion," said James Gilbert, an orthopedic surgeon and sports medicine specialist with The Centers for Advanced Orthopaedics. " … statistically, there is almost always a decrease in explosiveness and power, especially with running and jumping sports like basketball."

A study of 18 NBA players who underwent surgical repair for Achilles injury between 1988 and 2011 showed “a significant decrease in playing time and performance.’’ Seven of those players did not return to basketball.

Performance was measured by NBA Player Efficiency Rating (PER) calculated two seasons before and two seasons after the injury, according to the study — “Performance Outcomes After Repair of Complete Achilles Tendon Ruptures in National Basketball Association Players’’ — published in the American Journal of Sports Medicine in 2013. 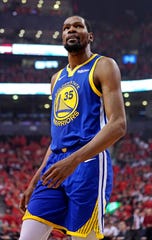 Almost half of 44 NBA players who ruptured Achilles tendons over the past three decades were unable to return or play more than 10 games upon returning to the league, according to a study presented this year to the American Academy of Orthopedic Surgeons. Those players who did return were “unable do so so at their pre-injury level, as evidence by the observed decline in PER,’’ according to the study set to be published in the American Journal of Sports Medicine.

“It’s hard to be definitive because everybody’s so unique,’’ said Brett Owens, an orthopedic surgeon and lead author of the study presented this year to the American Academy of Orthopedic Surgeons. “But what we have seen in other sports is the skill level of the player really tends to bode well for their ability to return.’’

That recovery period increases the challenge for an athlete to regain his top form because most athletes who suffer Achilles injuries have reached, or are nearing, the peak of their careers, according to the studies.

Durant is 30, slightly older than the average age of NBA players who have suffered the same injury, according to the two studies.

“Certainly when you see someone at the tail end of those highly productive years, you usually see a drop-off,’’ said Owens, a professor at Brown University Alpert Medical School. “And when coming back from an injury, it’s a little bit harder. But if anyone can do it, it’s the superstar athlete, right?’’

Turner Vosseller, part of a team of orthopedic surgeons that studied the recovery of NFL players who underwent Achilles tendon surgery, echoed those sentiments when asked about Durant.

FINALS: Raptors win, but NBA Finals was far from classic

NOT SO GOLDEN: Season couldn’t have ended any worse for Warriors

DYNASTY? Where do Warriors rank among NBA dynasties?

“I would certainly expect him to come back,’’ said Turner, a co-author of “Professional Athletes’ Return to Play and Performance after Achilles Tendon Ruptures,’’ published in the American Journal of Sports Medicine in 2017. “And I would expect him to get back to being a top-tier player.

“I don’t know if he would be as dominating as before. But I think a good comparison would be Kobe Bryant, who obviously came back (after Achilles surgery at the age of 34) and was pretty darn good.’’

Lowell Weil, a team podiatrist for the Chicago White Sox and a consultant for the Chicago Bulls, pointed to NFL linebacker Terrell Suggs as an example of what’s possible. Suggs, a seven-time Pro Bowler, in 2012 returned to play and registered a sack just five months after surgery for a partial tear of his right Achilles tendon.

“So you can still be extremely explosive, and he’s such a talented athlete,’’ Weil said of Durant. “If he works hard in his recovery, there’s no reason to say he won’t be able to get back to the pinnacle of the profession.’’

Gilbert, who as team physician has worked with soccer players, basketball players and football players, stressed the importance of the rehabilitation process for athletes.

“They really need to dig in,’’ Gilbert said. “We’ve gotten better at getting patients back to a high level. There’s newer aggressive, quicker rehab protocols. We know ways to speed up and help nature along.

“But it’s tough to get back to 100 percent, full maximum level after an injury like that. It’s hard to predict. But great athletes, if you’re so above the curve to begin with, you might still be above the curve.’’

06/14/2019 Sport Comments Off on Kevin Durant has a long road back from Achilles injury, but his ability bodes well
Recent Posts