When the moment arrived — when a major league team finally hired a woman to run its baseball operations — Kim Ng found a fitting way to tell her mother and four younger sisters. She gathered them all outdoors, at a gazebo in Wanaque, N.J., where her mother lives, and took them back in time.

Ng played a video clip from 2000 on her iPad. On the screen, a young Derek Jeter, the star shortstop for the reigning world champion Yankees, presented Ng with an award from an organization for women in the business of sports. She was the Yankees’ assistant general manager at the time, and now, all these years later, the man in the video was giving her a chance at the top job with his own team.

As the video concluded, Ng told her family she would be moving to Miami.

“We’re scratching our heads and thinking, ‘What’s she talking about?’” Ng’s mother, Virginia Cagar, 73, said in a telephone interview. “And she said, ‘I’m going to be joining Derek Jeter and the Marlins.’”

The news, announced on Friday by the Miami Marlins, the team Jeter runs as chief executive and a part owner, had a seismic impact in sports. Never before had a woman ascended to the role of full-time general manager in any of the major men’s leagues in North America. After three decades as an executive with the Chicago White Sox, the Yankees, the Los Angeles Dodgers and Major League Baseball, Ng had finally broken through.

“I was not the kid that was always going to follow the rest of the group,” Ng (pronounced Ang) said at a news conference in Miami on Monday. “That was not me. I was going to do my own thing and I didn’t care what people said. I was just going to do it.” 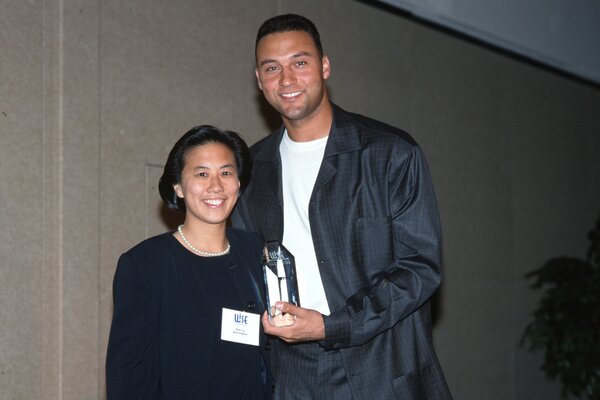 Ng, 52, is also the second person of Asian descent — after Farhan Zaidi of the San Francisco Giants — to lead a baseball operations department. Ng’s parents, both United States citizens of Chinese descent, went to college in Indiana, where Ng was born. Her father, Jin Ng, who died when she was 11, worked as an accountant. Her mother, who was born in Thailand but moved to Long Island at 5, worked as a banker.

Ng spent most of her childhood in the New York area, where her family became Yankees fans. She attended Public School 173 in Fresh Meadows, Queens, where she played stickball with friends, using cars and manhole covers as bases. The family then moved to Glen Cove on Long Island, where Ng played in her first organized softball league, and to Ridgewood, N.J., where she played softball and tennis in high school.

Empowerment was a major theme of her childhood.

The tennis stars Billie Jean King and Martina Navratilova were inspirations, Ng said, largely for what they embodied. King fought for equality, she said, and Navratilova “changed the idea of what it looked like to be a female athlete.”

The women’s rights movement of the 1970s also had an early impact on Ng’s family, clearing a path for Cagar’s career in the financial industry. But sports was much slower to change; as a concerned mother, Cagar said, she tried to nudge Ng into her field, or toward a law career. Her suspicion about the lack of opportunities in baseball was well founded.

“Women were always looked at as intruders into a supposedly man’s sport,” said the Hall of Fame manager Joe Torre, 80, who worked with Ng with the Yankees and the Dodgers and at Major League Baseball headquarters. “That change evolved over the years when they started opening the clubhouse to female writers, which obviously was the right thing to do. I came from a family with two sisters, and they were such loyal baseball fans. The female could know as much about the game as the male fan, that’s for sure.”

At the University of Chicago, Ng honed her love of the game as a scrappy middle infielder and captain for the softball team. Kim Vance, who coached the team then, said Ng was a smart player with a fiery side that made teammates better.

“Of course, the coach always loved to have that influence on the team,” Vance said. “She was a real natural leader.”

Ng wrote her college thesis on the impact of Title IX, the groundbreaking 1972 federal law that greatly expanded women’s access to sports by forbidding gender discrimination at educational institutions. She graduated in 1990 with a degree in public policy and took an internship with the White Sox.

“An internship at that time was kind of new to me, and I said, ‘Well, what’s my return on investment?’” Cagar said, laughing as she recalled the exchange with her daughter over the cost of financing her private university education. “She said, ‘Nothing.’ She was working for free.”

Working under the executives Ron Schueler and Dan Evans, Ng handled special projects and salary arbitration cases for the White Sox, earning a promotion to assistant director of baseball operations and impressing club officials with her inquisitiveness and keen understanding of rules and procedures. She moved on in 1997 to the American League office, where she was responsible for approving teams’ transactions, and a year later became the Yankees’ assistant general manager, working under Brian Cashman through 2001.

Those were glorious seasons for the Yankees, who won three World Series in a row and a fourth consecutive A.L. pennant in 2001. Ng soaked in the atmosphere, spending more and more time around championship-caliber players like Jeter and expanding her on-field knowledge by learning from the team’s architect, Gene Michael, and its amateur scouting director, Damon Oppenheimer. Ng wanted to know how scouts viewed the game, Oppenheimer said, and what statistics they valued.

“She had great people skills, and that was the thing that stood out to me,” Oppenheimer said. “She was probably the smartest person in the room and never had to make everybody feel that way.”

Ng left for the Dodgers in 2002, again teaming with Evans, who was the team’s general manager. Evans assigned Ng to oversee player development and scouting. Sometimes he would send her on road trips, making Ng the go-to pointperson for the team and the news media.

On one of those trips, Evans did what a mentor does, mapping out the path ahead for Ng. Someday soon, he told her, she could have a chance to interview for general manager jobs, so she should start planning her strategy. Ng smiled.

“She’s got that little impish grin,” Evans said, “and she goes, ‘You don’t think I’ve thought about that already?’”

Word was getting around. When Jim Duquette became the Mets’ general manager in 2003, he tried to hire Ng as his assistant. She stayed with the Dodgers, and soon after, at a conference in Phoenix, a Mets special assistant mocked Ng’s Chinese heritage while yukking it up at a bar.

Duquette fired the assistant — a former pitcher, Bill Singer, who claimed he could not recall the comments — and came away with even more respect for Ng.

“Here was a blatantly difficult situation that became public, and she just handled it with such grace and class,” Duquette said. “She had every right to be upset and angry, and it was one of those things like, ‘Eventually, I’ll forgive.’ But she was very, very firm with Bill in particular and with us as an organization: It was not acceptable, under any circumstances.”

It was with the Dodgers, Ng said, that she first believed she could handle a general manager’s job, though the team hired Paul DePodesta to succeed Evans and then Ned Colletti to replace DePodesta after having interviewed Ng. Colletti increased Ng’s responsibilities, assigning her contracts to negotiate (as she had done with the Yankees), and giving her the lead on some trade talks. He recommended her for general manager openings, and eventually Ng would interview for the role with the Seattle Mariners, the Los Angeles Angels, the San Diego Padres and the Giants.

“I’d say, ‘How did it go?’ and a couple of days later she’d get a call back that they were going in a different direction,” Colletti said. “You could see the disappointment, but she stayed with it — and I think, perhaps, that the more she invested in it, the more she refused to give up. That’s a tremendous trait.”

The Dodgers reached the National League Championship Series three times under Colletti, twice with Torre as the manager. Torre said he developed a strong rapport with Ng, admiring her communication skills and breadth of experience.

“There was no aspect of the game she wasn’t familiar with,” Torre said. “It was just a very comfortable conversation all the time, because you didn’t have to try to measure your words when you were around her. You could talk to her the same way you’d talk in the clubhouse. She was one of the group. I shy away from saying ‘one of the guys’ — but she fit in really well, let’s put it that way.”

She fit in so well that when Torre took a job in Major League Baseball’s central office, in 2011, he persuaded Ng to join him in New York. She served as senior vice president of baseball operations for 10 seasons, helping to set and enforce protocols for international signings, among other duties. Torre once accompanied Ng to the Dominican Republic, and he remembers her commanding attention and respect.

“That’s not easy,” Torre said. “In the Dominican, they run their own show. But she went over and they hung on every word she was saying.”

The job also gave Ng insight into the workings of all 30 major league teams. She kept landing interviews for general manager openings, but Torre said he sometimes wondered how seriously teams took her. There was no denying the strength of Ng’s résumé, but nobody seemed willing to break the gender barrier.

In Jeter — who was seeking a replacement for Michael Hill, whose contract was not renewed — Ng had more than a friendly advocate. Jeter, whose mother is white and whose father is Black, has valued diversity in reshaping the Marlins since he took over as chief executive and a part owner under Bruce Sherman in late 2017. The team’s chief operating officer, Caroline O’Connor, is among the highest-ranking women in Major League Baseball, and people of color hold influential jobs throughout the Marlins’ front office.

Yet Jeter is also famously driven, a Hall of Famer and a five-time World Series champion who did not get into ownership to lose. With the Marlins coming off their first playoff appearance in 17 years, Jeter’s motivation for hiring Ng was simple: He believed she was the best fit for the job.

“He’s known her for 22 years,” said Suzyn Waldman, the Yankees’ radio analyst and a pioneer for women sportscasters. “Derek is very thorough, and he doesn’t want to fail, either. Do you think he’s going to pick somebody he doesn’t think can help the team, just to make a statement?”

Jeter spoke only briefly at Ng’s news conference and did not take questions, ceding the spotlight to her. Duquette, Colletti and Waldman all called her the most qualified first-time general manager in their memory, and for Ng, the recognition underscored her commitment to remaining undeterred despite the discouraging rejections.

Ng said she felt an immense responsibility to continue setting an example for other minorities and women, particularly younger ones thinking about a future in sports.

After watching the Marlins’ news conference, Cagar spoke highly of Sherman and Jeter for hiring her daughter. She noted that all girls, including Ng’s nieces, Riley, Rain and Eva, would now have more opportunities in sports.

But Cagar’s final message was for her trailblazing daughter, who turned an unpaid internship into an unprecedented leadership role, even if it took 30 years.

“You go, girl,” Cagar said. “Show them boys how it’s done. And, by the way, the return on investment has been fantastic — with more to come.”