Nick Kyrgios is the latest player adding to Australia’s rich heritage at Wimbledon – and the man himself knows that many of his predecessors are not happy about it.

Sunday’s Wimbledon finalist re-emerged into the spotlight in the wake of his free pass through the semis, and bluntly opined that some of them have ‘a sick obsession with tearing me down.’

In a remarkable audience with the media he talked of the legendary Australians regarding him as being somewhat below stairs, how he had only got one hour’s sleep after his walkover, and his ‘weird bromance’ with former enemy Novak Djokovic. 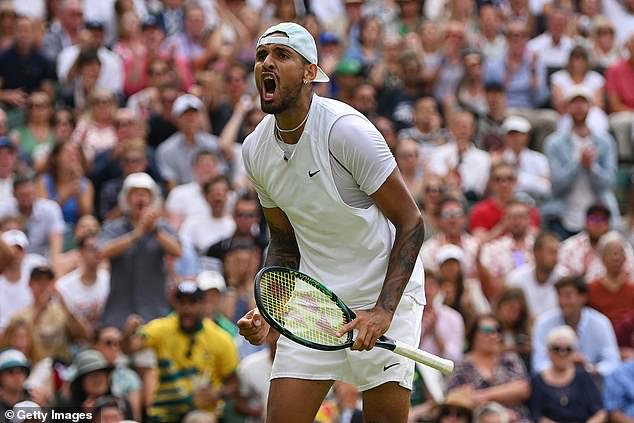 Kyrgios may divide opinion, but he is quite some talker, and on this unexpected day off he demonstrated again an almost unique candour.

Pat Cash and Mark Philippossis are among those who have criticised his behaviour in the past week, although he has notably calmed since the explosive third round against Stefanos Tsitsipas.

After that win, Cash launched a blistering attack on Kyrgios, accusing his fellow Australian of cheating, abuse and dragging tennis down to new depths.

‘It was absolute mayhem,’ Cash said on BBC radio.

‘He’s brought tennis to the lowest level I can see as far as gamesmanship, cheating, manipulation, abuse, aggressive behaviour to umpires, to linesmen.

Speaking about all of the criticism, Kyrgios said: ‘It’s pretty sad because I don’t get any support from any of the other Australian tennis players.

‘Not the (current) players, but like the past greats. It’s weird they just have like a sick obsession with tearing me down for some reason. I’m definitely the outcast of the Australian players.

‘When I saw Ash Barty in the final of the Australian Open, I was nothing but happy. I would never say a bad word about an Australian making a final. Like that’s just me.

‘I just don’t know whether they don’t like me or they’re, like, afraid. I don’t know what it is, but it sucks, because if it was roles reversed, if I saw Alex de Minaur in a final, or Jordan Thompson or Thanasi (Kokkinakis), I’d be pumped. I’d be stoked. I’d be having a pint watching going nuts.’ 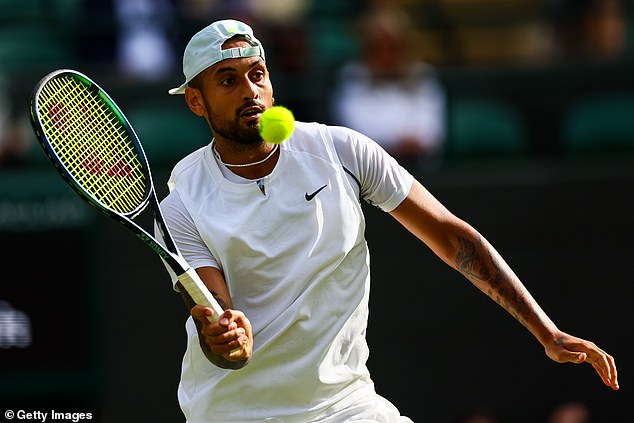 Kyrgios – who is from Canberra – must ensure that the devil does not find work for idle hands to do, because he suddenly faces a hiatus of four days between the quarters and the final, thanks to Nadal’s withdrawal due to an abdominal strain.

He admitted that the adjustment to not having the hugely-anticipated match on Friday afternoon was proving a challenge.

‘As a competitor, I really did want that match. We’ve both taken a win against each other at this tournament. I wanted to see how the third chapter was going to go. We’ve had a lot of run-ins, a lot of battles. I’m sure at the end of the day everyone wanted to see us go to war out there.

‘I had a shocking sleep last night. I probably got an hour’s sleep just with everything, like the excitement. I had so much anxiety, I was already feeling so nervous, and I don’t feel nervous usually. I was just restless, so many thoughts in my head about a Wimbledon final. That’s all I was thinking about.

‘I feel like I’m just a reckless ball of energy right now. I just want to go out on the practice court and hit some tennis balls and just talk. I want it to come already. I know that I have to kind of calm down.’ 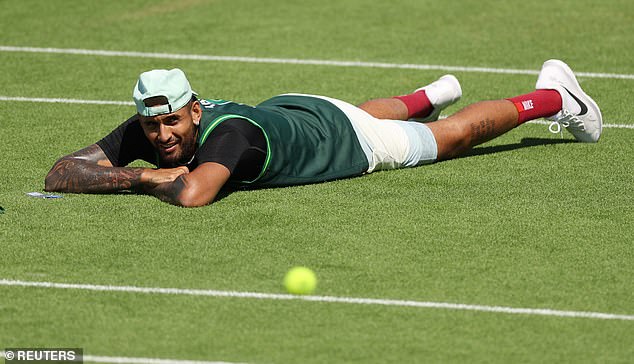 Prior to the Djokovic-Cam Norrie match he pointed out that ‘if you do your research’ they would conclude that Serb will be his next opponent. He likes Norrie and praised his development as a player, recalling their meetings when younger: ‘I just remember that kid with a pink sweatband playing under 10s that I used to destroy every time I played him.’

He has clashed personally with Djokovic in the past, once describing his post-match celebrations as ‘cringeworthy’. That changed when Kyrgios publicly sympathised with him back in January, when the champion ended up being deported from Australia.

‘We definitely have a bit of a bromance now, which is weird. I think everyone knows there was no love lost for a while there. I think it was healthy for the sport. I think every time we played each other, there was hype around it. It was interesting for the media, the people watching.

‘I felt like I was almost the only player to stand up for him with all that kind of drama at Australian Open. I feel like that’s where respect is kind of earned. Not on the tennis court, but I feel like when a real life crisis is happening and someone stands up for you.

‘We actually message each other on DMs in Instagram now and stuff. It’s real weird. Earlier in the week, he was like, ‘hopefully I’ll see you Sunday.’

Everything that has happened these past 12 days has clearly been a lot to compute in his complex mind: ‘I beat Paul Jubb 7-5 in the fifth set in my first round, and now I’m in the Wimbledon final. You just have to ride the waves, roll with the punches in a Grand Slam. You could be four points away from losing the tournament, then 11 days later you’re in the final.’

07/08/2022 Sport Comments Off on Kyrgios: Australian legends have 'sick obsession with tearing me down'
Recent Posts