Los Angeles Lakers star LeBron James called Thursday for "swift action" to be taken against a part-owner of the Golden State Warriors who shoved Toronto Raptors point guard Kyle Lowry during the fourth quarter of Game 3 of the NBA Finals Wednesday night.

Mark Stevens, a venture capitalist and member of the Warriors' executive board, shoved Lowry after the player crashed into the first row of courtside seats while pursuing a loose ball. Lowry landed a couple of seats to Stevens' left, and TV footage showed Lowry being shoved in the left shoulder.

Stevens was escorted from his seat and out of the arena a short time later and the Warriors announced Thursday that he would not be allowed to attend any more games in the series.

James posted a video of the incident on Instagram alongside a lengthy caption that began: "There’s absolutely no place in our BEAUTIFUL game for that AT ALL … When you sit courtside you absolutely know what comes with being on the floor and if you don’t know it’s on the back on the ticket itself that states the guidelines. But he himself being a fan but more importantly PART-OWNER of the Warriors knew exactly what he was doing which was so uncalled for. He knew the rules more than just the average person sitting watching the game courtside so for that Something needs to be done ASAP! A swift action for his actions.

"Just think to yourself, what if [Lowry] would have reacted and put his hands back on him," James added. "You guys would be going CRAZY!! Calling for him to damn near be put in jail let alone being [sic] suspended for the rest of the Finals all because he was protected [sic] himself."

In a statement Thursday, the Warriors said Stevens' actions "did not reflect the high standard that we hope to exemplify as an organization. We're extremely disappointed in his actions and, along with Mr. Stevens, offer our sincere apology to Kyle Lowry and the Toronto Raptors organization for this unfortunate misconduct."

The Warriors said their probe into the incident was ongoing. The Associated Press reported Thursday that the NBA was conducting its own investigation. 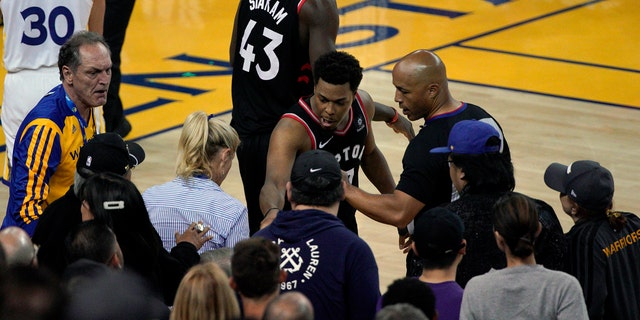 Lowry confronts Warriors fans after the shove by part-owner Mark Stevens in the fourth quarter of Game 3 of the NBA Finals. (AP Photo/Tony Avelar)

Lowry, a 14-year NBA veteran, told reporters he spoke with league officials about the incident after the game, which the Raptors won 123-109. He added that Stevens repeatedly made a vulgar comment to him during the brief exchange.

"Hopefully, he never comes back to an NBA game," Lowry added.

Wednesday's incident was not the first high-profile confrontation between players and fans this season.

Oklahoma City's Russell Westbrook was involved in at least two such scenes during the regular season, one of them leading to a fan's permanent ban from all events at the arena the Utah Jazz call home. Westbrook reacted angrily after he said a fan at a Utah game made racist comments to him, and the league fined Westbrook $25,000 for responding in a vulgar manner.