The 35-year-old will follow in the iconic footsteps of Michael Jordan when he stars alongside the Looney Tunes favourites as the original movie approaches its 25th birthday. 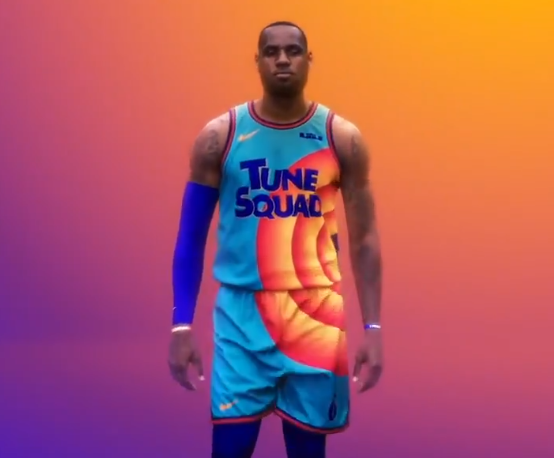 And in a video shared to social media, James can be seen marching towards the camera in a whole new jersey and number.

While fans are used to seeing James donning the No23, made iconic by Jordan, in the jerseys of the Cleveland Cavaliers, Miami Heat and now LA Lakers, they will have to get used to him wearing No6 in the upcoming release.

The bright blue jersey, which features the background of the Looney Tunes logo across it, features the slogan "Tune Squad", as well as the Nike swoosh.

While little is yet known about the plot, fans are excited to see where James takes the extremely popular film series.

What is known is that he'll star alongside a host of other top NBA stars, including Lakers team-mates Anthony Davis and Kyle Kuzma, as well as the likes of Klay Thompson, Chris Paul and Damian Lillard.

Unlike the 1996 original, WNBA players will also feature, with Diana Taurasi, Nneka Ogwumike, and Chiney Ogwumike all confirmed for cameos.

Black Panther director and writer Ryan Coogler will be involved in production alongside James, while Malcolm D. Lee directs.

The star-studded production's score will be produced by Academy Award winner Hans Zimmer of Lion King and Inception fame.

Meanwhile James, Davis and Kuzma are all in action tonight, as the Lakers get their playoff campaign up and running with a Western Conference round one match up against Lillard's Portland Trailblazers in the Orlando bubble.

08/18/2020 Sport Comments Off on LeBron James shows off first look at Space Jam 2: A New Legacy as NBA star wears No6 'Tune Squad' jersey
Recent Posts
We and our partners use cookies on this site to improve our service, perform analytics, personalize advertising, measure advertising performance, and remember website preferences.Ok