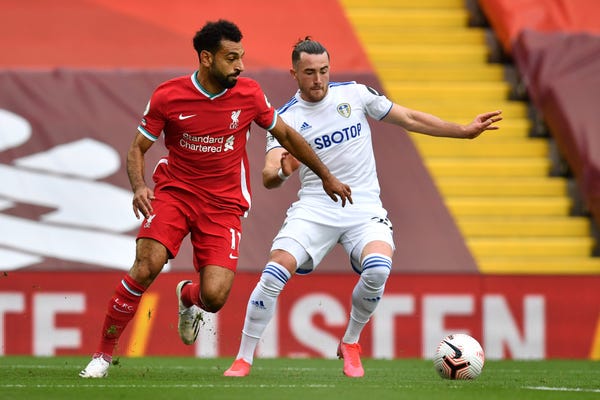 The Egyptian opened the scoring in the just the fourth minute when he converted from the penalty spot, however his opener was cancelled out just eight minutes later when Jack Harrison scored a fine solo goal to make it 1-1.

Liverpool's Virgil van Dijk scored in the 20th minute to restore the lead for Jurgen Klopp's side, before the Dutchman then gifted Leeds a second equalizer shortly after, miscontrolling Kalvin Phillips' hopeful long pass into the Patrick Bamford's path, who finished with aplomb.

Salah made it 3-2 with a stunning volley in the 33rd minute, before Leeds pegged the champions back again early in the second half through Mateusz Klich.

Salah then completed his hat-trick in the 88th minute, again from the penalty spot, to earn Liverpool a hard fought victory.

"Without fans it's so tough – especially at Anfield, everybody knows that. But it's a good start for us," Salah said after.

"A tough team, they press high as well, so the intensity was really high. We had a good game. We shouldn't have conceded three but this is the game, we have to react for that and we did a good job.

"It's a tough team, to be fair. They had a great game. There's no fans but they play, they react really well and they scored three goals against us – that's huge.

"I'm happy about the result and we have to keep on improving and try not to concede as many goals."