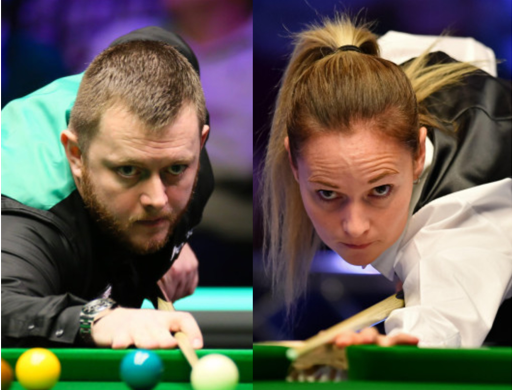 There is going to be a unique sense of drama and tension on the snooker table on Monday evening at the British Open as former partners Reanne Evans and Mark Allen meet in one of sport’s most unusual grudge matches.

It is rare in professional sport for men and women to compete, but for the opponents to be former partners who share a teenage daughter, this meeting presents a situation that is really out of the ordinary.

The pair split up 13 years ago, but tensions have rumbled on, with Evans heading to court earlier this year looking for greater support payments for their daughter.

Just how poor their relationship is was made clear at the World Championships at the Crucible this year when Allen was practicing ahead of a match and Evans was working as a pundit in the BBC studio.

The Northern Irishman asked for her to leave while he was practicing as she was a distraction, something she reluctantly did for a short period of time, but was reportedly ‘upset and embarrassed’ by the incident.

Allen has been one of the top players in the game for some years, while Evans has been right at the top of women’s snooker for well over a decade, winning the Women’s World Championship 12 times.

As World Snooker Tour look to expand the game, Evans and Ng On-yee were awarded two-year tour cards for the main professional tour, starting this season, as the top two players in the women’s world rankings.

The Pistol was critical of the decision, saying ‘I’m not really sure what the two women are going to bring,’ and now he will have the chance to find out.

The British Open begins on Monday and in the random draw of all 128 players, Allen and Evans were pulled out of the hat together to meet in round one.

It is not a draw either would have wanted and although Allen will be clear favourite to win the match, it is another off-table distraction that he could do without.

Speaking after his exit from the World Championship in the second round this year, he said: ‘I’ll probably take a bit of a break from the game even if it means missing a few tournaments just to get all that sorted out.

‘It’s hard playing snooker at the best of times when you are competing against the very best in the world with a clear head. At the minute I just don’t have that.’

Allen has since declared himself bankrupt and returned to the table at the Championship League, the first event of the season, where he lost in the final to Dave Gilbert.

After that impressive run to the final he made mention of his next outing, but has not commented on the prospect of taking on his ex.

‘Very well done to Dave Gilbert winning his first tournament… it was only a matter of time!!’ Allen tweeted.

‘Decent start to the season for me but just wasn’t meant to be in the end. Onto the next one for me. British open starts Monday. I play 7pm.’

It may be a frosty atmosphere at the Morningside Arena in Leicester when these two play, but it will be must-see television.

The evening session starts at 7pm, with Allen vs Evans following Judd Trump vs Mitchell Mann live on ITV4.

For more stories like this, check our sport page