Mark Eaton, a former NBA star who played his entire career with the Utah Jazz, died Friday night, the team announced. He was 64.

The Jazz didn’t announce a cause of death. According to KUTV, Eaton left his home in Summit County, Utah, for a bike ride around 8 p.m. local time and never returned. The station reported there was no foul play suspected but his cause of death was unknown. 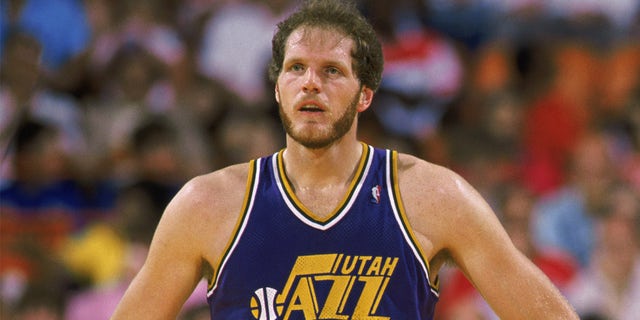 Utah selected the 7-foot-4 Eaton in the fourth round of the 1982 NBA Draft out of UCLA. He played for Utah from 1982 to 1993. He was a five-time All-Defensive First Team selection, a four-time block champion, two-time Defensive Player of the Year and was named to an All-Star team once.

He finished his career with 3,064 blocks. He is fifth all-time in that category behind Hakeem Olajuwon, Dikembe Mutombo, Kareem Abdul-Jabbar and Artis Gilmore. He and Tree Rollins are the only former players in the top 10 in career blocks who are not in the Hall of Fame. He also holds the record for most blocks in a season with 456.

After his career was over, Eaton was a motivational speaker and an author. He mentored current Jazz center Rudy Gobert.

“I will text Rudy on occasion and tell him your job is to guard the entire team. The paint is your house. Don’t let anybody in there,” Eaton told the Jazz’s website in 2019. “I love watching him. He’s so exciting.”