But the back-rower has credited advice from Kevin Walters for sparking a remarkable turnaround capped by a stunning State of Origin debut barely 12 months later. 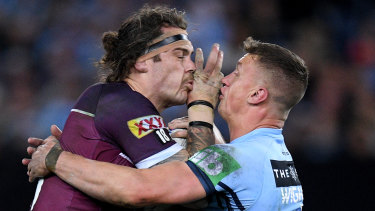 Lowe being tackled by Jack Wighton of the Blues during Game 3 of the State of Origin series on Wednesday.Credit:AAP

A former North Queensland star, Lowe feared his NRL career might have been over when he was unwanted by Cowboys coach Paul Green and relegated to Queensland Cup side Northern Pride in 2018.

However, Lowe revealed his comeback was inspired by Walters when the Maroons coach wandered into Northern Pride's dressing rooms last year.

Walters was at the game only to watch his son Billy play for Brisbane Easts but he still took time to reassure Lowe.

After starring for Queensland, the back-rower is now glad Walters did.

"I'm not sure if Kevvie remembers this, but I was playing Q-Cup against his boy Billy and after the game he came and said a few words to me," Lowe said.

"It's something I haven't forgotten and something I've used as motivation to keep working hard. It's got me here. 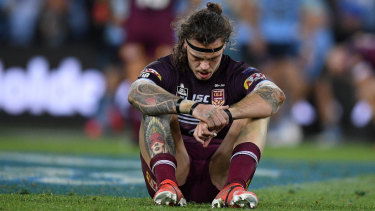 A dejected Lowe was one of Queensland’s best on Wednesday, kicking four crucial goals, running 90 metres and making 52 tackles in an inspiring 80-minute effort.Credit:AAP

"He talked about not letting one person define who I am as a footballer.

"He said to me he knew I was a very good footballer and I just needed an opportunity."

It finally came when South Sydney threw him a lifeline in 2019, signing him on a one-year deal.

Lowe didn't look back, forcing his way into the Queensland squad for Wednesday's series decider – albeit as only the 18th man.

By rights, Lowe shouldn't have played.

However, after a groin injury to back-rower Matt Gillett, the forward not only found himself running out in the starting side but also being handed goal-kicking duties.

In the end, Lowe was one of Queensland's best, kicking four crucial goals, running 90 metres and making 52 tackles in an inspiring 80-minute effort.

"It's been a wild week. But it's probably one of the happiest and proudest days of my life even though we didn't get the result," Lowe said.

"This is something that pretty much every Queenslander dreams of growing up, to wear this jersey – it's something I will never forget.